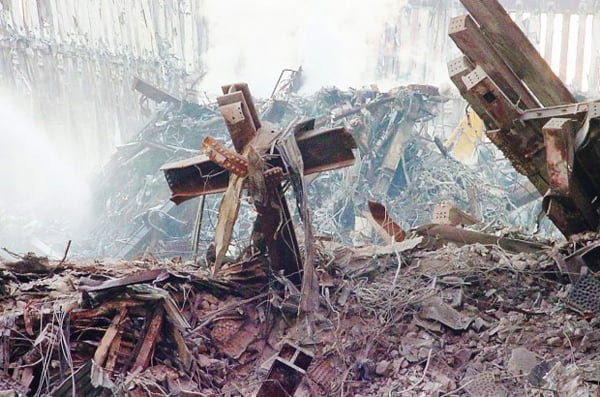 A cross formed from the Sept. 11 wreckage at Ground Zero in New York City.

The infamous “Ground Zero mosque” debate is officially over. A “market maker” 70-story skyscraper will soon break ground at lower Manhattan’s 45 Park Place, ending any possibility of resurrecting plans for the religious building.
Imam Feisal Abdul Rauf’s proposal four years ago to create a 15-story Islamic cultural center near the site of the Sept. 11, 2001, terrorist attacks sparked a national uproar.
Developer Sharif El-Gamal of Soho Properties, who was originally on board with the plan, rendered the whole debate moot by opting to build a 667-foot condominium tower for the property instead, Crain’s New York Business reported Friday.
The news is likely to be cheered by former Republican House Speaker Newt Gingrich, who did not hide his displeasure with the idea of building a “Ground Zero mosque.”
“The folks who want to build this mosque – who are really radical Islamists who want to triumphally prove that they can build a mosque right next to a place where 3,000 Americans were killed by radical Islamists – those folks don’t have any interest in reaching out to the community. They’re trying to make a case about supremacy. That’s why they won’t go anywhere else, that’s why they won’t accept any other offer,” Gingrich said Aug. 16, 2010, during an appearance on “Fox and Friends.”
El-Gamal told Crain’s his skyscraper will include five full-floor units of 3,200 to 3,700 square feet, and average prices higher than $3,000 a square foot.
“Every day that we’ve been waiting, the market has been getting stronger and showing incredible signs of resilience,” Mr. El-Gamal said, the magazine reported. “The appreciation and absorption this market is showing is unprecedented.”
El-Gamal put aside plans for the “Ground Zero Mosque” in 2011 after he had trouble finding financial backers, but until now was unsure what would take its place. Public records show he bought the lot in 2009 for $4.85 million, the magazine reported.
The developer expects to break ground on the project – just two blocks from where the former World Trade Center towers stood – in early 2016, Crain’s reported.
El-Gamal has not changed his plans, however, to build a three-story Islamic museum and prayer space adjacent to the tower.
“New York’s arts and cultural institutions have always been a great inspiration to me and I consider this opportunity to create a museum to be a true privilege,” said El-Gamal April 30, 2014, in a statement, the New York Post reported.
“Sharif’s new plan is not an improvement over the previous one. It just causes different kinds of offense,” Robert Spencer, who runs the blog Jihad Watch, told the newspaper at the time.