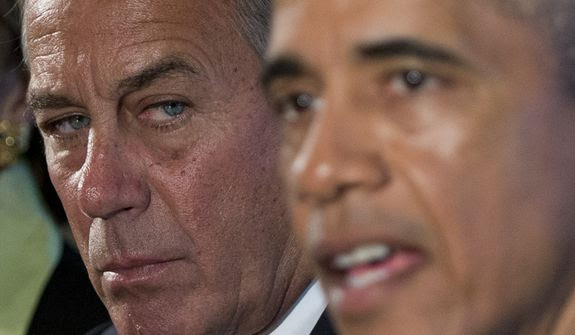 
The resignation of Speaker John A. Boehner is sure to complicate life for President Obama, who was able to work with the Ohio Republican on occasion despite a contentious partisan relationship.
On major issues such as immigration reform, Mr. Obama has said publicly that the speaker is more moderate than the tea-party faction of House Republicans whom the White House blames for blocking most legislation. The president also has complained that Mr. Boehner is unable to deliver enough votes in various negotiations with the White House, and the departure of Mr. Boehner opens up the possibility that the new speaker would be more conservative.
Mr. Obama had no immediate comment Friday on Mr. Boehner’s announcement. The president ignored questions shouted to him by reporters as he met with Chinese President Xi Jinping in the Oval Office during an official state visit.
Since taking over as speaker in 2011, Mr. Boehner has cooperated with the White House on some occasions. He reached a debt deal with Mr. Obama in 2011 despite failing to reach a “grand bargain” during sometimes bitter negotiations, and he helped the president to get fast-track trade promotion legislation through Congress earlier this year over the vocal opposition of most Democratic lawmakers.
The two men, avid golfers, played a much-publicized round of golf in 2011, but they didn’t become regular playing partners. Mr. Boehner said this summer he didn’t enjoy golfing with the president because “everybody gets bent out of shape worried about what we are up to.”
Source>http://www.washingtontimes.com/news/2015/sep/25/boehners-departure-creates-uncertainty-obama/
Posted by theodore miraldi at 1:39 PM