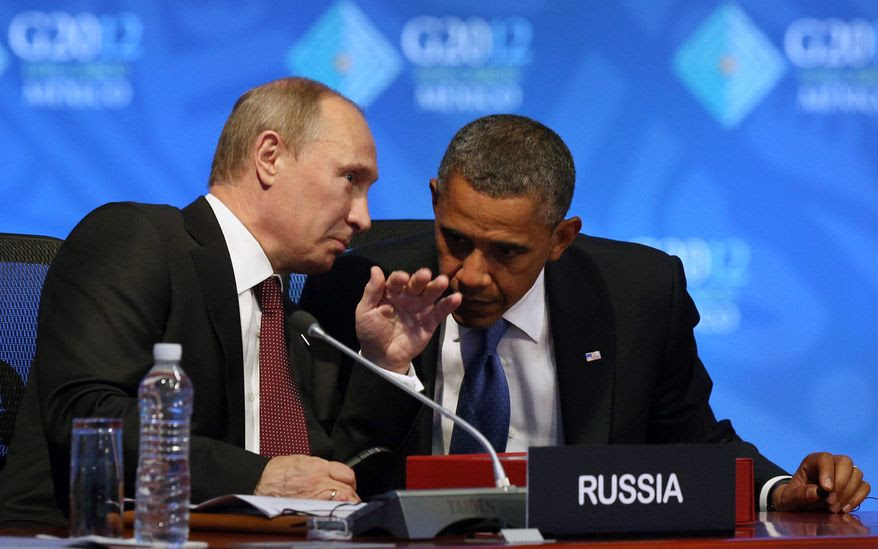 
Vladimir Putin views the Syrian army and its Iranian allies as incapable of defeating the Islamic State in Syria, prompting the Russian president to directly intervene in recent weeks by setting up an air base and sending in tanks, artillery and jet fighters, a report to Congress says.
Mr. Putin’s bold yet risky move of putting troops on the ground directly confronting a terrorist group contrasts sharply with the Obama administration’s strategy of an air campaign over Syria but little other military action in that country.
The Islamic State controls wide sections of territory in Iraq and in Syria, where it has proclaimed a capital of Raqqa in Syria’s east.
Analysts at the Congressional Research Service delivered an assessment to lawmakers Friday that says Mr. Putin is helping his ally, Syrian President Bashar Assad, and protecting Russia’s southern flank in the Caucasus, where Islamist fighters congregate and deploy.
“Russia’s recent activity in Syria also may be motivated by an assessment that the Syrian military forces are becoming less capable and that Iranian support may be inadequate to preserve the Assad regime,” said the report. “Moscow’s primary intentions may include safeguarding the Assad regime, preserving Russian naval access to Syria, and challenging U.S. policy toward Syria.”
The report added: “Putin’s recent call for an all-out effort against the Islamic State also may stem from the sizable number of jihadist fighters from the North Caucasus fighting in Syria, who may pose a serious problem for Moscow should they return to Russia.”
If Mr. Putin does view the war against the Islamic State as stagnant, he has an ally in Army Gen. Martin E. Dempsey, chairman of the Joint Chiefs of Staff. Gen. Dempsey told reporters this month that the war is “tactically stalemated.”
Russia’s military commitment to Syria sent the Obama administration scrabbling to adjust a policy battered by both Democrats and Republicans. The administration’s plan to put ground troops in Syria in the form of moderate rebels has basically failed. Fewer than a half-dozen fighters remain in the country after a number of their colleagues were killed.
Pentagon press secretary Peter Cook said Friday that Defense Secretary Ashton Carter spoke by phone with his counterpart, Russian Defense Minister Sergei Shoigu, to ensure that each side understands the other’s intentions in Syria. The call effectively unfroze contact between the two militaries.
Mr. Carter has been the most outspoken critic of Russian actions in Europe. He said in August that Mr. Putin’s regime, which annexed Crimea and invaded Ukraine, is now an “antagonist” — something it had not been for decades.
But Russia’s move in Syria is more complicated because Mr. Putin says he shares the same goal as the U.S. — defeating the Islamic State, also known as ISIL and ISIS.
While Mr. Carter has been a harsh critic, Secretary of State John F. Kerry has taken the lead in talking with the Russians. Mr. Kerry’s recent statements on Syria seem to be shifting as he adjusts to the fact thatRussia has become a much bigger player in Syria.
He spoke Tuesday with Russian Foreign Minister Sergey Lavrov. Afterward, the State Department press office issued a statement: “Secretary Kerry also reaffirmed the U.S. commitment to fight ISIL with a coalition of more than 60 countries, of which Assad could never be a credible member, and emphasized the U.S. would welcome a constructive Russian role in counter-ISIL efforts. The Secretary stressed that there is no military solution to the overall conflict in Syria, which can only be resolved by a political transition away from Assad.”
In London on Saturday for talks with the British foreign secretary, Mr. Kerry suggested that Mr. Assad’s exit is opened-ended.
“We have said that Assad has to go. But how long, what the modality is — that’s a decision that has to be made in the context of the Geneva process and negotiations,” Mr. Kerry said.
Russia has a long history of supporting the Assad family dynasty, which granted it a naval base and gives Moscow an avenue for significant influence in the Middle East and a way to maintain economic and military ties with Iran.
Why Russia would commit troops to prop up Mr. Assad and then agree to his removal is unclear.
“If Russian officials continue to reject the premise of Assad’s ouster as a precondition for a transition or counterterrorism cooperation, U.S. officials may confront a more lasting proxy conflict scenario,” the Congressional Research Service report said.
It was written by analysts Carla E. Humud, Steven Woehrel, Derek E. Mix and Christopher M. Blanchard.
James Russell, a former Pentagon official and now an instructor at the Naval Postgraduate School, said Mr Putin “seeks to punch his weight.”
“I don’t believe he cares a whit about the survival of his client, Assad,” he said. “But he does see some tactical advantage that may accrue to scaring us all into believing that Russia can somehow succeed where we in the West have failed in Iraq and Afghanistan in propping up a failing regime.Putin is seeking any vehicle open to him to try and create the sense thatRussia is powerbroker on the global stage.”
Ken Allard, a retired Army intelligence officer, said Mr. Putin views the breakup of the Soviet Union as an historical mistake by Russia.


“The Syrian deployment now brings Russian influence, arms and troops, to bear at a key geographic linchpin, between the Med and Israel’s entire northwestern frontier,” he said.
Source>http://www.washingtontimes.com/news/2015/sep/20/vladimir-putin-orders-ground-troops-to-syria-after/?page=all#pagebreak
Posted by theodore miraldi at 12:56 PM