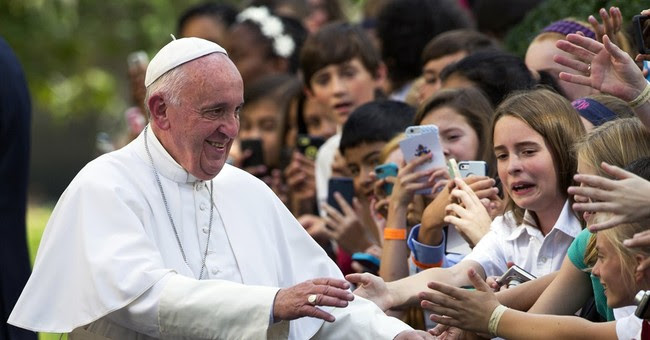 "A pope that mentions Dorothy Day is a pope that rocks," tweeted Neera Tanden of the left-leaning Center for American Progress. Tanden might have wished to reel back that praise if she had known that Day, though a prominent pacifist and socialist, was also a fervent opponent of abortion, birth control, Social Security and the sexual revolution.

It's fitting that Pope Francis should have invoked Dorothy Day among his pantheon of great Americans -- she's a symbol of where leftists always go wrong. This pope is going wrong in the same way. The left's delusions of "social justice" seem indomitable -- impervious to evidence.
The pope lauded Day for "her social activism, her passion for justice and for the cause of the oppressed, (which) were inspired by the Gospel, her faith, and the example of the saints."
Let's assume that Day's motives were as pure as Pope Francis described: Does having the right motives excuse everything?
Day's interpretation of the Gospel led her to oppose the U.S. entry into World War II, which arguably would have led to a world dominated by Nazi Germany, fascist Italy and Imperial Japan. How would that have worked out for the poor and the oppressed?
Though her social views were heterodox for a leftist, Day was a supporter of Fidel Castro and found very kind things to say about North Vietnam's Ho Chi Minh. She visited Leonid Brezhnev in the Kremlin and leant her moral support to other communist regimes despite their persecution of Catholics and others.
Of Castro, Day said, "I am most of all interested in the religious life of the people and so must not be on the side of a regime that favors the extirpation of religion. On the other hand, when that regime is bending all its efforts to make a good life for the people ... one cannot help but be in favor of the measures taken."
According to "The Black Book of Communism," between 1959 and the late 1990s, more than 100,000 (out of about 10 million) Cubans spent time in the island's gulag. Between 15,000 and 19,000 were shot. One of the first was a young boy in Che Guevara's unit who had stolen a little food. As for quality of life, it has declined compared with its neighbors. In 1958, Cuba had one of the highest per capita incomes in the world. Today, as the liberal New Republic describes it:
"The buildings in Havana are literally crumbling, many of them held upright by two-by-fours. Even the cleanest bathrooms are fetid, as if the country's infrastructural bowels might collectively evacuate at any minute.
"Poverty in Cuba is severe in terms of access to physical commodities, especially in rural areas. Farmers struggle, and many women depend on prostitution to make a living. Citizens have few material possessions and lead simpler lives with few luxuries and far more limited political freedom."
This left-leaning pope (who failed to stand up for the Cuban dissidents who were arrested when attempting to attend a mass he was conducting) and our left-leaning president have attributed Cuba's total failure to the U.S.
It's critically important to care about the poor -- but if those who claim to care for the poor and the oppressed stand with the oppressors, what are we to conclude?
Much is made of Pope Francis' Argentine origins -- the fact that the only kind of capitalism he's experienced is of the crony variety. Maybe. But Pope Francis is a man of the world, and the whole world still struggles to shake off a delusion -- namely, that leftists who preach redistribution can help the poor.
Has this pope or Obama taken a moment to see what Hugo Chavez's socialist/populist Venezuela has become? Chavez and his successor (like Castro, like Lenin, like Mao) promised huge redistribution from the rich to the poor. There have indeed been new programs for the poor, but the economy has been destroyed. The leader of the opposition was just thrown in jail. Meanwhile, the shops have run out of flour, oil, toilet paper and other basics.
If you want moral credit for caring about the poor, when, oh when, do you ever have to take responsibility for what happens to the poor when leftists take over?


We know what actually lifts people out of poverty: property rights, the rule of law, free markets. Not only do those things deliver the fundamentals that people need to keep body and soul together, but they accomplish this feat without a single arrest, persecution or show trial.
Source>http://townhall.com/columnists/monacharen/2015/09/25/redistribution-the-unconquerable-delusion-n2056616/page/full
Posted by theodore miraldi at 8:36 AM