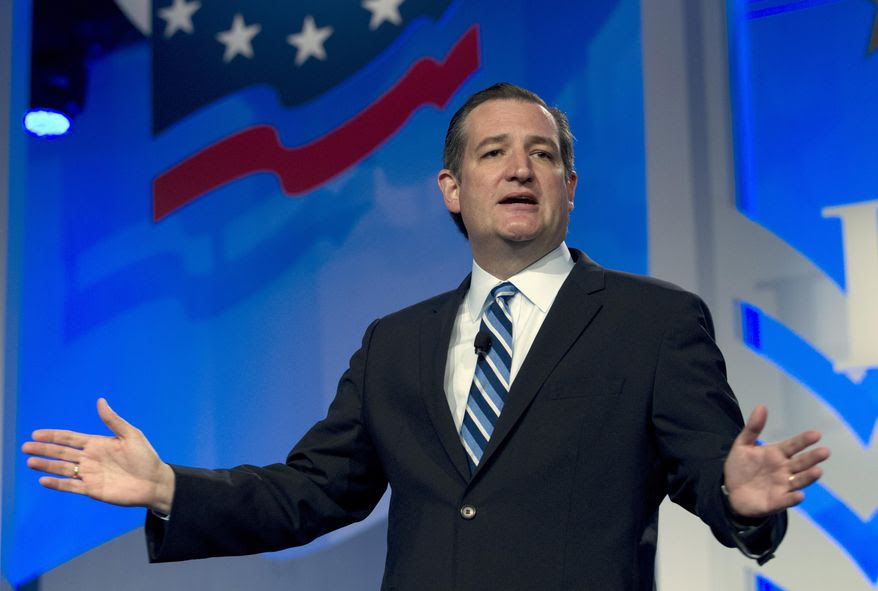 Seth McLaughlin
GOP White House hopeful Ted Cruz ruled the roost once again at the annual Values Voter Summit by winning the annual presidential preference straw poll here for the third straight year - further cementing his status a favorite among social conservatives that will play a pivotal role in picking the party’s nominee.
The Texas Republican captured 35 percent of the votes cast, outpacing his closest rival Ben Carson, who received 18 percent.
Former Arkansas Gov. Mike Huckabee finished third with 14 percent and Florida Sen. Marco Rubio placed fifth with 13 percent.
Mr. Carson was the crowd’s top pick for vice president. Carly Fiorina was the crowd’s second choice for vice president, and Mr. Cruz was the third.
Meanwhile, Donald J. Trump landed in fifth place with 5 percent, which is likely to fuel additional questions about whether the New York billionaire can translate his rock start status in national polls into support in the early caucus and primary states from Republican-leaning evangelical or born-again Christians, who say they still have questions about his faith and his stances on cultural issues.
“The Values Voters Summit is not just a snapshot of social conservatives across the country. It is social conservative influencers,” said Tony Perkins, head of the Family Research Council, which hsoted the event. “These are people who take time and resources to come here, who are engaged. They go back home and they are influencers.”
“So this is more reflective of what may be coming a few months down the road, as opposed to where the general social conservative community is today,” he said.
Speaker after speaker here at the three-day conservative confab sounded the alarm on the deterioration of “family values,” the war on “religious liberty” and the rise of “apocalyptic Islam” among leaders in Iran and the Islamic State.
Kentucky County Clerk Kim Davis, who spent five days in jail after defying a Supreme Court ruling by refusing to issue same-sex couples marriage licenses, received the Cost of Discipleship Award from FRC Action, the legislative arm of the FRC.
And David Daleiden, the 26-year-old founder of the Center for Medical Progress, which produced undercover videos of Planned Parenthood selling fetal tissue that has renewed efforts to stop federal funding for the abortion provider, also received a hero’s welcome.
The straw poll showed that the top issues for the 2,700 registered guests were protecting religious liberty, supporting pro-life efforts and defending traditional marriage.
The results of the straw poll was more evidence of how many conservatives want a presidential nominee to shakeup the status quo in Washington and avoid tapping a “moderate” cut from the same cloth as the party’s past two nominees - former Massachusetts Gov. Mitt Romney and Arizona Sen. John McCain.
The conservatives gathered here hooted and hollered in celebration of the news Friday that that House Speaker John A. Boehner, Ohio Republican, was leaving Congress at the end of October.
The announcement set the table for another leadership fight that is likely to expose the divisions over the direction of the GOP and the tactics that should be used to advance a conservative agenda on Capitol Hill.
Despite running in the middle of the pack in national polls, Mr. Cruz is thought to be well-positioned in the nomination fight - in part because he is a top choice of both tea partyers and religious conservatives, who love how he has picked fights with both parties on Capitol Hill over Obamacare, executive amnesties for illegal immigrants and the Iranian nuclear deal.
His campaign and allied super PACs have raised gobs of money and conservatives and tea partyers have celebrated the way he has questioned whether GOP leaders in Congress are truly committed to cutting the size and scope of government and pushing pack against the Obama administration’s policies.
Straw poll percent results:
Ted Cruz: 35 percentBen Carson: 18 percentMike Huckabee: 14 percentMarco Rubio: 13 percentDonald Trump: 5 percentRick Santorum: 4 percentCarly Fiorina: 3 percentBobby Jindal: 3 percentRand Paul: 2 percent
Write In Candidate: 1 percent