HEMPSTEAD, N.Y. – A Long Island teacher has filed suit against her employer, accusing the school district of tolerating a black student’s threats towards her.
Newsday reports Lynne Albuquerque, a science teacher in the Hempstead Public Schools district, claims “the school district took no disciplinary action after a student threatened her with sexual assault and discriminated against her because she was white.”
The student and school administrators at the center of Albuquerque’s accusations are black.
According to the suit, a student, identified by the initials “N.L.,” threatened the teacher in her classroom in May 2014.
“When I get done ramming you, I’m gonna bag your daughter, then ram the bitch through the whole gang,” N.L. allegedly told Albuquerque, according to the suit filed in Brooklyn Federal Court, the New York Daily News reports. 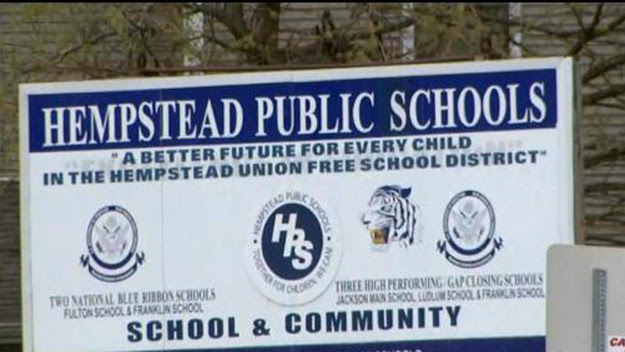 The teacher reported the threat to the school district, the police and the Nassau County district attorney’s office, and the student was suspended for three days. The penalty was later reversed, according to Albuquerque’s lawyer, Steven Morelli.
The suit claims the teacher was then accused by an administrator of “instigating” the threat. She was also hit with disciplinary charges by Assistant Superintendent Rodney Gilmore over a worker’s compensation claim she filed due to “emotional trauma.”
“Certainly to bring her up on charges after everything that happened is reprehensible,” Morelli tells the paper, adding Albuquerque is the third white employee to sue Hempstead Public Schools, alleging racial discrimination by school administrators.
“It seems to me there is a serious problem in the district when white teachers and administrators are subjected to unfair treatment,” Morelli says.
Source>http://eagnews.org/white-teacher-files-suit-accusing-ny-school-district-of-racial-discrimination/
Posted by theodore miraldi at 10:16 AM