ISIS To Israel: Palestine Will Become Your Grave 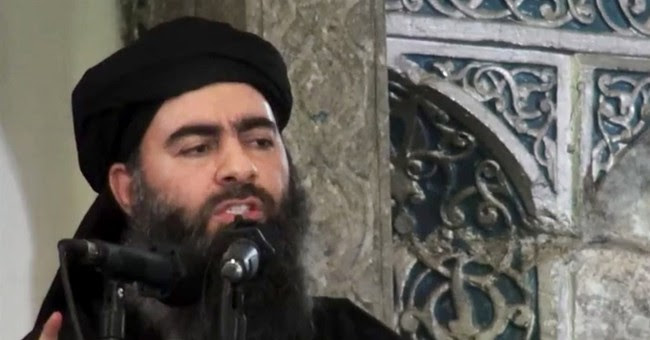 
In the first audio statement in several months, the Islamic State’s leader, Abu Bakr al-Baghdadi, threatened Israel and taunted the United States. I know–what else is new? Al-Baghdadi promised that Palestine will become Israel’s grave, and that the United States refuses to fight on the ground because we "were defeated in Iraq and Afghanistan." We’ve heard similar rhetoric over the years from radical islamic leader, and bashing Israel is a must within these circles.
In all, ISIS wants to bury Israel–and feels that Americans are cowards because we don’t fight them with ground troops. So, Happy New Year, everyone! (Via the Hill):

Baghdadi said the U.S. and its allies have "learned from" recent lengthy wars in Iraq and Afghanistan.
"Crusaders and Jews don't dare to come on the ground because they were defeated in Iraq and Afghanistan," he said.
He also threatened ISIS attacks in Israel, saying the terror network would attempt to establish a stronghold there as well.
"Jews, soon you shall hear from us in Palestine, which will become your grave," Baghdadi reportedly said.
"The Jews thought we forgot Palestine and that they had distracted us from it," he added. "Not at all, Jews. We did not forget Palestine for a moment. With the help of Allah, we will not forget it."
The message said that a U.S.-led coalition military campaign and Russian air strikes have failed to weaken ISIS.
"Be confident that God will grant victory to those who worship him, and hear the good news that our state is doing well. The more intense the war against it, the purer it becomes and the tougher it gets," the leader said.