Silent, invisible, deadly: The weapon that could change warfare 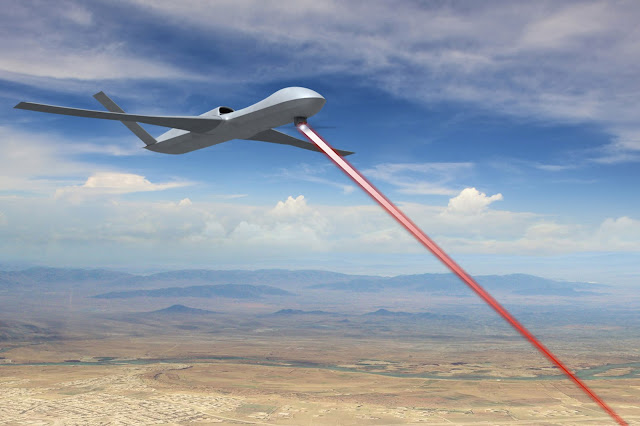 A General Atomics rendering shows a laser weapon fired from the company's new jet-powered Predator C "Avenger" drone (though in real life, the laser is invisible.)Photo: General Atomics
Richard Whittle
This month, the Force awakens in theaters. Next month, a new force awakens in the New Mexico desert, where the Defense Department is to start testing a weapon worthy of “Star Wars” — a silent, invisible laser that needs just a couple of seconds to burn a hole in targets miles away.
“What it really boils down to is a silent weapon that nobody sees or hears,” said Lt. Gen. Bradley Heithold, commander of Air Force Special Operations Command (AFSOC, pronounced “AFF-sock”).
Heithold is eager to put a laser cannon on four or five of AFSOC’s three dozen or so AC-130 gunships. AC-130s are typically used to cover special operations troops on nighttime missions.
“I think we can do this now,” Heithold said of the laser weapon. “When I say now, I’m talking about by the close of the decade.”
If Heithold is right, that’s a revolutionary turn of events — after decades of costly research.
A laser — the word is an acronym meaning “light amplification by stimulated emission of radiation” — is an intense beam of light that can be produced using a variety of materials. Bursts of energy are “pumped” into a “gain medium,” which can be a gas, liquid or solid, to excite the gain medium’s electrons and release photons.

“You create the laser beam inside the airplane, and you steer it off the left, just like we do our guns.”
- Lt. Gen. Bradley Heithold

Low-power lasers are a major part of modern life, using helium and neon gas to generate harmless light beams that do everything from scanning bar codes to changing TV channels to providing lecturers with handy pointers.