'Going up against an all-male squad with your squad half females?' 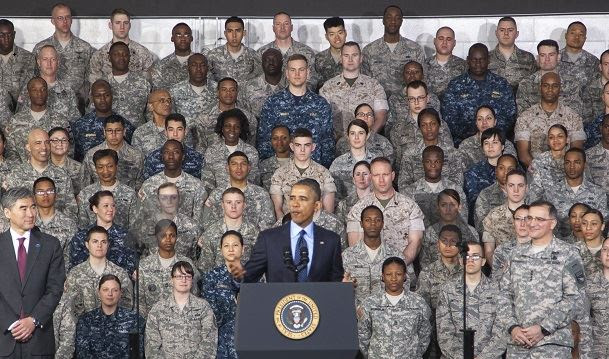 One of America’s greatest heroes is charging the commander in chief with deliberate sabotage of the nation’s armed forces.
The serious accusation leveled against Barack Obama comes from retired Army Maj. Gen. Patrick Brady, a recipient of the Medal of Honor, who told WND bluntly, “Obama loathes the military.”
“His goal is to reduce the military to impotence,” Brady said in an interview. “That way, during his reign, which, thank God, is almost over, he could point to an emasculated military and say he didn’t have the capability to [do] anything about it. If it came to a confrontation, I don’t think he would fight.”
Brady explained Obama “changed the ethos of the military” by lowering standards and moral values. He specifically identified the removal of the bans on open homosexuality and women in combat positions as destructive.
“It’s gone from a masculine-oriented outfit to a girly man kind of an outfit,” Brady said.
Brady, who was a legendary “Dust Off” air ambulance pilot in Vietnam and detailed his experiences in his book, “Dead Men Flying,” argued political correctness is endangering American security, creating a weaker, less versatile force.
The general argued women serving in combat is problematic simply because of the physical differences between the two sexes.
“I have commanded female students in peacetime in medical units,” said Brady. “I am aware of the demands on males made on the battlefield, moving bodies on the battlefield, using litters, even in terms of carrying a toolbox, which is heavy.”
Brady suggested most women are simply less capable of meeting such physical demands in a combat situation. He also told WND he heard from “several sources” the women who recently graduated Army Ranger School “had a lot of help.”
As reported in September, high-ranking officials in the Army “planned in advance” the results of training programs designed to see if women could meet the physical standards.
Brady laid out a chilling hypothetical example for soldiers and their family members.
“The bottom line is this: If you’ve got a squad in the hills of Afghanistan and your squad is half female, half male and you’re going up against a Muslim terrorist squad from ISIS that’s all male, do you want your daughter in that squad? Your mother? Your wife? Going up against an all-male squad with your squad half females? I don’t think so.”
He said, “It violates every tenet of common sense to put women in foxholes. Not to mention everything it does to morale, camaraderie and bonding. It will certainly cause divisiveness.”
Brady also condemned homosexuality in the American military on grounds of both health and morality. The former air rescue pilot explained each soldier is considered a “walking blood bank” in a medical emergency, but homosexual men for years have been banned from donating blood because of concerns about disease.
They still are banned under some circumstances.
Brady also charged the inclusion of homosexual soldiers creates a chilling effect, as soldiers who disagree with what they see as sexual immorality must “tip toe around for fear of saying the wrong thing” and facing punishment.
Finally, Brady spoke out against what he sees as an attempt by President Obama to silence officers perceived as hostile. He specifically called the attempt to demote Gen. David Petraeus even after his retirement as “disturbing.”
“I think that is a signal to all generals who are leaving the military so they don’t turn on him after they leave,” Brady said. “He’s telling them, watch out, I’ve got a weapon here that can be used even after you’re retired. Now, the man has made a lot of mistakes. But what they’re doing to Gen. Petraeus is remarkable really after what he’s been through.”


Brady questioned the combat experience and political bias of the current officer corps. He was especially critical of officers who put political correctness above the interests of their soldiers.
“We’re wasting money on diversity offices,” Brady said. “After the Fort Bragg massacre, we even had officers worrying about whether diversity would be the casualty.”
However, Brady sees hope with the emergence of Donald Trump as the Republican front-runner.
“Donald Trump has destroyed political correctness among the political class, among the other candidates,” Brady observed. “He has said certain things and has refused to apologize for them. And the American people love it! And the other candidates are finding out the American people love it.
“Before, you would say something which the media could twist into racism and bigotry and the media would crucify you, especially if you were a conservative. They tried that with him and it didn’t work. So now some of the other politicians are saying, ‘Hey, some of these things are true, Mexico is sending some criminals across the border, we have to do something about it. Some of those guys are rapists and druggies.’ But before Trump, if you said anything bad about them, they would label you as a racist.”
Despite his praise for Trump and his ability to “open the dialogue,” Brady said he would not be endorsing any candidate until the Republican primaries are over, whereupon he will “go all out.”
What advice does he have for the new commander in chief?
“The new guy needs to restore the ethos of the military,” Brady said. “And get the military back to what it’s meant for – breaking things, and killing things.”