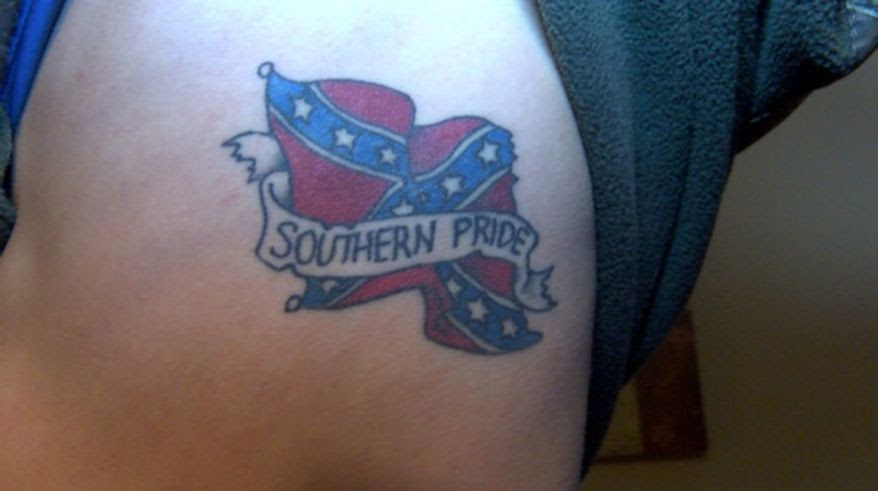 Anthony Bauswell, 18, says he was rejected from enlisting in the U.S. Marine Corps over his "Southern Pride" Confederate flag tattoo. (Image: KARK)

Kellan Howell
An Arkansas teen says he was turned down when he tried to join the U.S. Marine Corps because of his “Southern Pride” Confederate flag tattoo.
Anthony Bauswell, 18, of Greenbrier, Ark. shows his pride in his country upbringing with his tattoos, and to show pride in his country he walked into the Conway Marine recruiting center Monday to enlist.
When he showed the recruiter his body art, he was automatically disqualified from service.
“As soon as I said rebel flag on my ribs, he says DQ, just automatically, DQ,” Mr. Bauswelltold local news station KARK 4.
The tattoo on his ribs shows a Confederate flag flying underneath a banner that says “Southern Pride.”
“I felt pretty low. My own government wasn’t going to let me serve my country because of the ink on my skin,” he said.
The Marine Corps tattoo policy states: “Tattoos/brands that are sexist (express nudity), racist, eccentric or offensive in nature… are prohibited.”
Mr. Bauswell said he understood the stigma associated with the flag, but he didn’t think his tattoo was a racist symbol.
“I definitely don’t want it to be seen as racism, which is 99 percent of the reason I got southern pride on it,” he told KARK 4.
The Marine Corps is expected to update its tattoo policy sooon to make it clearer to those who serve what kind of body art is deemed inappropriate.
“Having talked to them, I don’t think most Marines understand what the policy is,” Commandant Gen. Robert Neller told the Marine Corps Times on Wednesday. “I don’t think they understand what they can do. They just know they can’t get a sleeve.”
The new policy will not likely impact Mr. Bauswell, who now feels like his future is in limbo.
“I kind of felt like I had a plan for my life, and now that I can’t go, I am not sure where I stand,” he told KARK.
Source>http://www.washingtontimes.com/news/2016/jan/23/arkansas-teen-rejected-marines-over-confederate-fl/
Posted by theodore miraldi at 9:00 AM