Can Clinton delay email release until after Iowa and N.H.? 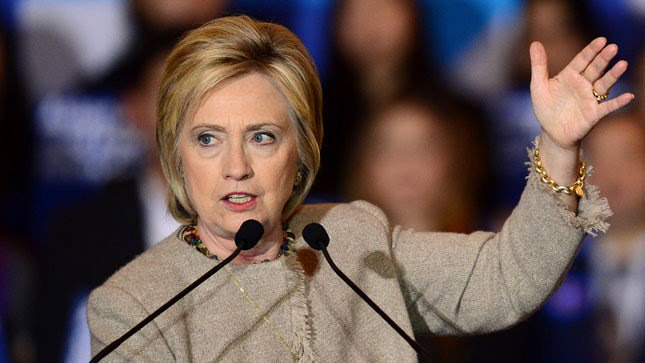 SARAH WESTWOOD
A federal judge will weigh this week whether the State Department is allowed to delay the release of the final unpublished batch of Hillary Clinton's private emails until the end of February, after the first round of presidential primaries has occurred.
But a lawyer for Jason Leopold, the Vice News reporter who filed the Freedom of Information Act lawsuit in question last year, argued Monday that State had no grounds on which to stall the release of the emails.
"Voters should be dismayed by State's attempt to withhold from the public over 7,000 pages of presidential candidate Hillary Clinton's emails documenting her tenure as the nation's top diplomat," said Ryan James, Leopold's attorney, when filing an opposition brief in federal court Monday. "If the delay State seeks is granted, over 45 million Americans in early voting states may be asked to vote without the knowledge of what these emails contain."
The State Department argued in court papers filed Friday that it had discovered, on the week of Jan. 11, thousands of pages of Clinton's emails that had never been sent to outside agencies for review, as they should have been in past months.
Due to the oversight and the incoming winter storm, State Department attorneys formally asked a judge to push the deadline back from Jan. 29 to Feb. 29 so they could have an extra month to look over the emails.
"The fact that State hasn't been more forthright about how over 7,000 pages of highly contentious emails, some of which undoubtedly contain classified information, were lost for up to six months is further reason for alarm," James added.
He told the Washington Examiner he would be "shocked" if a judge fully granted the State Department's request, and said the most likely scenario involved a judge asking the agency to produce everything it can by the original Friday deadline and setting a new date for the publication of the remainder of the emails that takes into consideration only the days actually missed due to the snowstorm and other factors.
In the opposition brief filed Monday, Leopold's legal team emphasized the impact of the proposed delay on the Democratic presidential primary.
"The delay until Feb. 29, 2016, that State is requesting will deprive the voters of Iowa, New Hampshire, Nevada and South Carolina of the ability to participate in the democratic process as fully informed as they would otherwise be under the current Jan. 29, 2016, deadline for the production of the Clinton emails," they wrote.
The plaintiffs in the high-profile FOIA case argued the State Department had failed to come up with "sufficient evidence" to support their request for a month-long extension.
Reince Priebus, chairman of the Republican National Committee, blasted what he called a "blatant attempt to shield Hillary Clinton from accountability."
"It's clear that the State Department's delay is all about ensuring any further damaging developments in Hillary Clinton's email scandal are revealed only after the votes are counted in the early nominating states," Priebus said.
The State Department also missed the court-ordered deadline at the end of December, forcing officials to publish thousands of pages of Clinton's emails in early January to make up for the shortfall.
Source>http://www.washingtonexaminer.com/can-clinton-delay-email-release-until-after-iowa-and-n.h.-judge-to-rule/article/2581346
Posted by theodore miraldi at 5:34 PM