'Clinton may be unable to finish remarks' 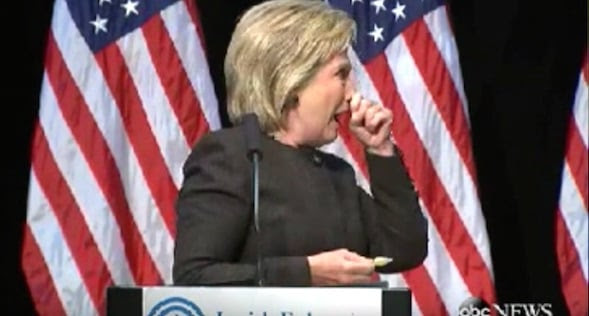 Democrat front-runner Hillary Clinton had a coughing fit on Monday that will do little to quell rumors the former U.S. secretary of state is in poor health.

The 68-year-old Clinton had to stop a speech in West Des Moines, Iowa, to try and compose herself after a hacking attack.
“.@HillaryClinton has coughing attack at West Des Moines event, may be unable to finish remarks,” Amy Chozick of the New York Times said on Twitter.
Clinton’s health has been a question of speculation since her last coughing fit before the House Select Committee on Benghazi on October, 22, 2015. Media titan Matt Drudge called Clinton’s apparent health issues the “biggest revelation” of the Benghazi hearings.
“Hillary health was biggest revelation at hearing. Coughing fit. Slow-speaking, obviously induced by meds. Choose not to believe if you must,” Drudge tweeted.
Clinton’s campaign released a health care statement in July confirming hypothyroidism as well as allergies. The former secretary of state takes Armour Thyroid to treat an underactive thyroid.
Armour Thyroid can also be used to prevent certain types of enlarged thyroid glands and to manage thyroid cancer, Fox News reported July 31.
The former first lady also sustained a concussion after falling inside her home in December 2012. She was given blood thinners for a blood clot in her head and returned to work Jan. 7, 2013.
It was only two days ago that Clinton laughed off a question by an Iowa voter who asked if she "was really not equipped to be in the White House" because of health issues. The audience member said she heard stories about Clinton's health on Fox News.
"Oh my. Well, you know, they say nearly anything about me. I've got to tell you," Clinton, said, ABC News reported Saturday. "There are several themes they keep beating the drums on. I'll match my endurance against anybody. And last spring, my doctor put out a letter and you know, said what great health." 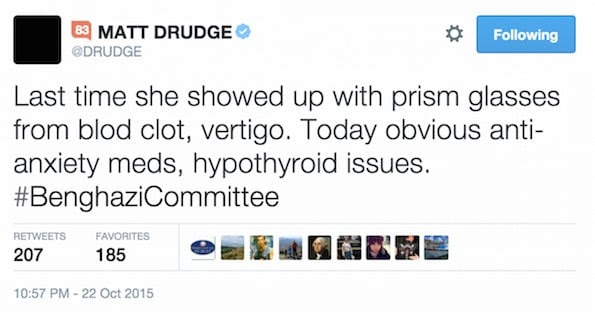