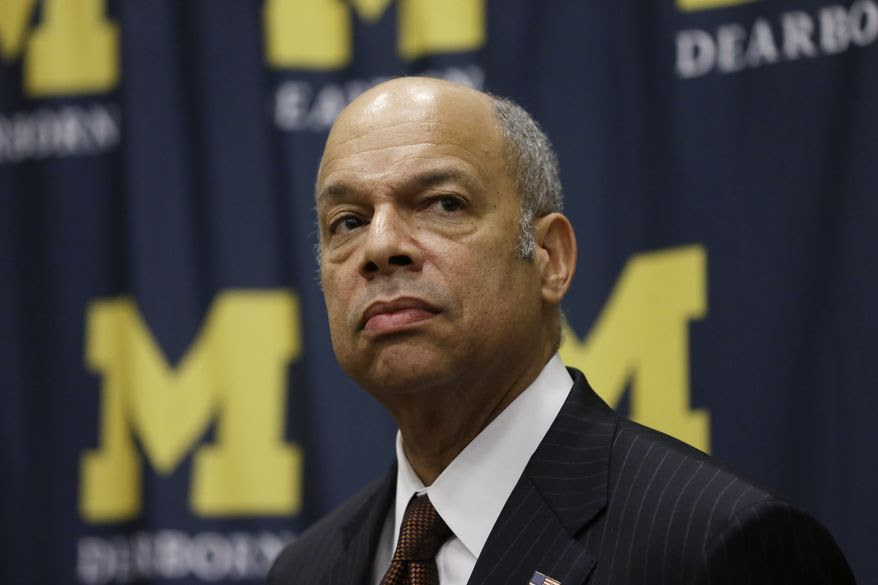 Photo by: Carlos OsorioSecretary of Homeland Security Jeh Johnson listens to a question after speaking at the University of Michigan-Dearborn on the Department’s efforts to engage communities to form partnerships focused on fostering better public safety and homeland security, Wednesday, Jan. 13, 2016, in Dearborn, Mich. (AP Photo/Carlos Osorio)
Stephen Dinan


The Obama administration announced a special carve-out Thursday for Iranian business travelers, granting them a potential exemption from a new law designed to make sure foreign fighters tied to the Islamic State and other terrorist organizations can’t get into the United States.
Homeland Security and State Department officials announced the special Iranian business waiver, along with other waivers for Iraqi business, international humanitarian aid workers and journalists as they began carrying out the rest of the law, which is intended to force people who’ve visited world hot spots to undergo stricter screening before they can enter the country.
Foreigners who normally would be able to enter the U.S. without a waiver but who have traveled to Syria, Sudan, Iraq or Iran since 2011 — or who hold dual citizenship that includes one of those countries — will have to go through the more cumbersome visa process.
The Iranian waiver in particular is controversial because it’s seen as a concession President Obama is making to the regime in Tehran in order to keep his controversial nuclear deal on track.
Experts on Capitol Hill, however, said the Iranian carve-out violates the law Mr. Obama signed just a month ago, which specifically rejected waivers for business purposes.
“President Obama is again putting his relationship with Iran’s supreme leader over the security of Americans,” said House Committee on Homeland Security Chairman Michael T. McCaul, Texas Republican, and Rep. Candice S. Miller, the Michigan Republican who authored the law. “The will of Congress was clear with this legislation, yet now the executive branch is blatantly planning to violate it.”
The GOP lawmakers said they were “reviewing our options” for how to fight Mr. Obama’s move.
At issue is the U.S. visa waiver program (VWP), which grants tourists and business visitors from more than three dozen countries entry into the U.S. without having to go through the extensive screening and in-person interviews required for obtaining a visa.
The countries that qualify are mostly firm U.S. allies, including most European nations.
But with thousands of Europeans having gone to train with the Islamic State and other terrorist organizations in Syria and Iraq, Congress worried covert Islamic State recruits could use their European passports to gain easier entry into the U.S.
Those fears were heightened after last year’s terrorist attack in Paris, which involved several terrorists with European documents.
The law Congress passed gave the Homeland Security secretary a waiver allowing visa-free travel in cases of national security.
In a memo Thursday, however, Homeland Security officials said they would expand that waiver to include business travelers who visited Iraq or who went to Iran under the terms of last year’s Joint Comprehensive Plan of Action (JCPOA), which laid out the terms for Iran to halt its nuclear weapons program in exchange for the lifting of international sanctions.
The deal had bipartisan opposition in Congress, but lawmakers couldn’t muster the two-thirds majority they required under their own law to stop Mr. Obama from implementing it.
Iran and its international partners, including the U.S., finalized the deal this weekend, and Secretary of State John F. Kerry acknowledged in an interview with CNBC Thursday that some of the tens of billions of dollar in assets Iran will regain access to under the deal will be used to fund terrorism.
“I’m not going to sit here and tell you that every component of that can be prevented,” he said, although he added they haven’t seen evidence of that so far.
Mr. Kerry and Mr. Obama have been trying to keep the Iranian deal on track, and the business waiver was seen as part of that effort.
Even as Mr. Obama was signing the law last month, Mr. Kerry wrote a letter to his Iranian counterpart assuring him the administration would make broad use of the waiver powers to protect business travel. Mr. Kerry indicated the U.S. had that obligation under the terms of the JCPOA.
State Department spokesman Mark Toner defended business travel as a “national security” concern, saying it was “a category worthy to qualify for exemption.” White House press secretary Josh Earnest described the business waiver as “common sense.”
Even as conservatives accused Mr. Obama of stretching the law, theadministration took heat from other quarters who said including dual nationals was unfair. They said that because a country such as Iranconsiders anyone born to an Iranian parent a citizen of Iran, it would mean a Frenchman born in France to an Iranian parent, even if he’s never set foot in Iran, would have to get a visa to travel to the U.S.


A bipartisan coalition in Congress has introduced legislation to revoke that part of the new law, and Mr. Earnest said the White House would likely support that.“I think that’s a good example of how we feel the system can be improved,” he said.
Source>http://www.washingtontimes.com/news/2016/jan/21/dhs-ends-visa-waivers-terrorism-countries/?page=all#pagebreak
Posted by theodore miraldi at 7:47 AM