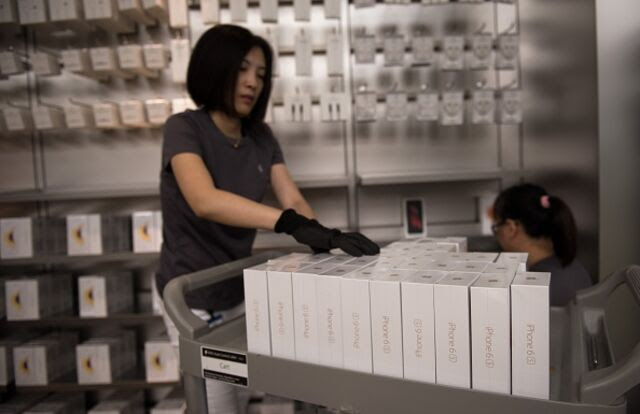 YOUR JOB WENT TO CHINA AND ALL YOU GOT WAS AN IPHONE.
PHOTOGRAPHER: JOHANNES EISELE/AFP/GETTY IMAGES
Megan McArdle
Was opening our markets to trade with China a good idea?
My colleague Noah Smith argues “maybe not,” citing a new paperfrom David Autor, David Dorn, and Gordon Hanson.
They write:

Adjustment in local labor markets is remarkably slow, with wages and labor-force participation rates remaining depressed and unemployment rates remaining elevated for at least a full decade after the China trade shock commences. Exposed workers experience greater job churning and reduced lifetime income. At the national level, employment has fallen in U.S. industries more exposed to import competition, as expected, but offsetting employment gains in other industries have yet to materialize.