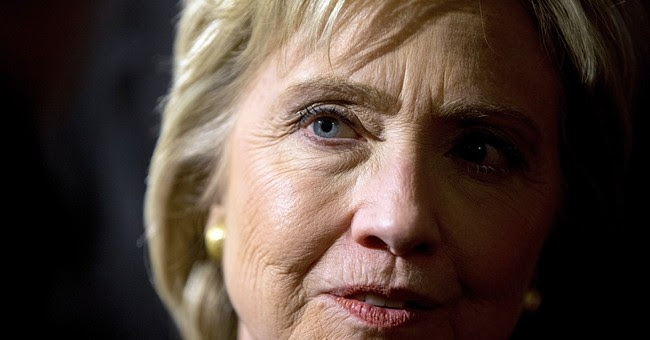 Hillary Clinton's nightmare is not the sudden resurgence of Bernie Sanders. It is the fidelity to the rule of law of the FBI.

The recent revelations of the receipt by Clinton of a Special Access Program email, as well as cut and pasted summaries of state secrets on her server and on her BlackBerry nearly guarantee that the FBI will recommend that the Department of Justice convene a grand jury and seek her indictment for espionage. Here is the backstory.
It seems that every week, more information comes to light about Clinton's grave legal woes. Her worries are in two broad categories: One is her well-documented failure to safeguard state secrets and the other is her probable use of her position as secretary of state to advance financially her husband's charitable foundation. The FBI is currently and aggressively investigating both. What I will describe below is in the state secrets category. It is apparently not new to the FBI, but it is new to the public.
Among the data that the FBI either found on the Clinton server or acquired from the State Department via its responses to Freedom of Information Act requests is a top-secret email that has been denominated Special Access Program. Top secret is the highest category of state secrets (the other categories are confidential and secret), and of the sub-parts of top secret, SAP is the most sensitive.
SAP is clothed in such secrecy that it cannot be received or opened accidentally. Clinton -- who ensured all of her governmental emails came to her through her husband's server, a nonsecure nongovernmental venue -- could only have received or viewed it from that server after inputting certain codes. Those codes change at unscheduled times, such that she would need to inquire of them before inputting them.
The presence of the SAP-denominated email on her husband's server, whether opened or not, shows a criminal indifference to her lawful obligation to maintain safely all state secrets entrusted to her care. Yet, Clinton has suggested that she is hopelessly digitally inept and may not have known what she was doing. This constitutes an attempted plausible deniability to the charge of failing to safeguard state secrets.
But in this sensitive area of the law, plausible deniability is not an available defense; no judge would permit the assertion of it in legal filings or in a courtroom, and no lawyer would permit a client to make the assertion.
This is so for two reasons. First, failure to safeguard state secrets is a crime for which the government need not prove intent. The failure can be done negligently. Thus, plausible deniability is actually an admission of negligence and, hence in this case, an admission of guilt, not a denial.
Second, Clinton signed an oath under penalty of perjury on Jan. 22, 2009, her first full day as secretary of state. In that oath, she acknowledged that she had received a full FBI briefing on the lawfully required care and keeping of state secrets. Her briefing and her oath specified that the obligation to safeguard state secrets is absolute -- it cannot be avoided or evaded by forgetfulness or any other form of negligence, and that negligence can bring prosecution.
What type of data is typically protected by the SAP denomination? The most sensitive under the sun -- such as the names of moles (spies working for more than one government) and their American handlers, the existence of black ops (illegal programs that the U.S. government carries out, of which it will deny knowledge if exposed), codes needed to access state secrets and ongoing intelligence gathering projects.
The crime here occurs when SAPs are exposed by residing in a nonsecure venue; it does not matter for prosecution purposes whether they fell into the wrong hands.
Clinton's persistent mocking of the seriousness of all this is the moral equivalent of taunting alligators before crossing a stream. SAPs are so sensitive that most of the FBI agents who are investigating Clinton lack the security clearances needed to view the SAP found among her emails. Most FBI agents have never seen a SAP.
Shortly after the presence of the SAP-denominated email was made known, the State Department released another email Clinton failed to erase wherein she instructed her subordinates to take state secrets from a secure venue, to cut and paste and summarize them, and send them to her on her nonsecure venue. Such an endeavor, if carried out, is a felony -- masking and then not safeguarding state secrets. Such a command to subordinates can only come from a criminal mind.
Equally as telling is a little-known 2013 speech that recently surfaced given by one of Clinton's former subordinates. The aide revealed that Clinton and her staff regularly engaged in digital conversations about state secrets on their BlackBerries. This is not criminal if the BlackBerries were government-issued and secured. Clinton's was neither. It was purchased at her instructions off the shelf by one of her staff.
Can anyone doubt that Clinton has failed to safeguard state secrets? If her name were Hillary Rodham instead of Hillary Rodham Clinton, she'd have been indicted months ago.
What remains of the rule of law in America? The FBI will soon tell us.
Source>http://townhall.com/columnists/judgeandrewnapolitano/2016/01/28/hillary-clintons-nightmare-n2110841/page/full
Posted by theodore miraldi at 12:41 PM