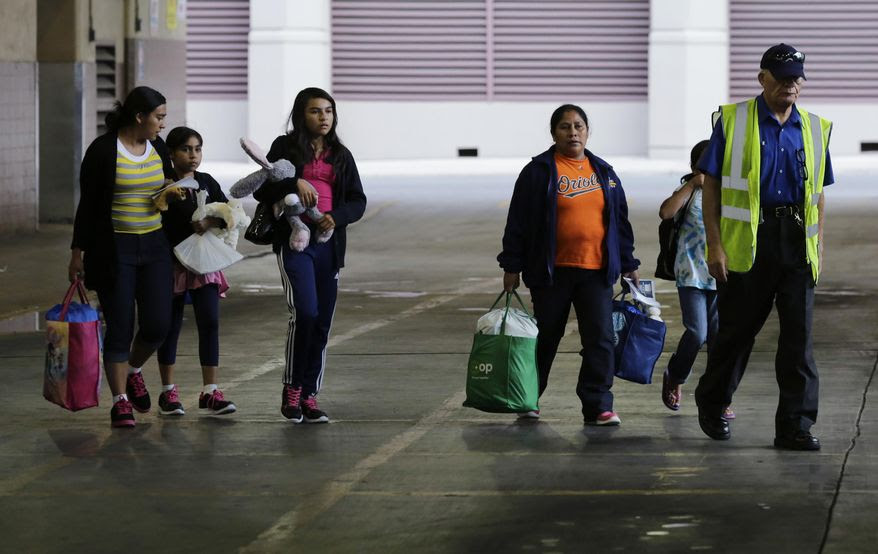 Illegal immigrants' rights are being violated at a detention facility in California, according to a complaint filed Tuesday. (Associated Press/File)

Stephen Dinan
Illegal immigrant women being detained at a California jail say they are being “humiliated” by strip-searches, particularly in cases involving transgender detainees, and have filed a complaint demanding federal officials put a stop to it.
The complaint, sent Monday to the Santa Ana City Jail and U.S. Immigration and Customs Enforcement, which contracts with the jail to hold illegal immigrants, is the latest step in an escalating push by immigrant rights advocates to try to end the detention of women and children in the country illegally and, in the meantime, to alleviate conditions at the facilities.
In this case, advocates say the Obama administration isn’t taking enough steps to secure the dignity of illegal immigrants, particularly transgender women. They say the jail conducts invasive and embarrassing searches and forces detainees to “stand and walk barefoot on dirty floors contaminated with bodily fluids.”
“These searches are particularly traumatizing for asylum seekers who have survived sexual assault and rape, and the strip searches undermine the healing these women need,” Christina Fialho, general counsel at Community Initiatives for Visiting Immigrants in Confinement, said in the complaint.
Nine other organizations, including the local American Civil Liberties Union chapter, gay rights groups and immigrant advocacies, supported the complaint.
ICE said in a statement that it is committed to fair treatment of its detainees and has ordered an investigation into the accusations.
Thirty-one women — six who publicly identified themselves and 25 who chose to remain anonymous because of fear of retribution — detailed some of the searches.
In one instance, a woman identified only by the initials OA reported being forced to undergo a strip search after a plate was shattered and one of the jagged pieces was lost.
“They came very close to touching her body, and they looked with a flashlight in all orifices including her ears, mouth, and nose,” Ms. Fialhosaid in her 16-page complaint. “They made her bend over and cough, as they looked with a flashlight into her buttocks. They made her lift her penis, while the officers pointed at her in a mocking manner. The officers then made OA physically lift her testicles and looked under them with a flashlight. OA explains she felt completely humiliated.”
Another woman who was willing to be named, Gloria Hernandez, said she was sexually assaulted in Honduras because she identifies as a lesbian. She said the strip-search “re-traumatized” her and led her to attempt suicide.
Ms. Fialho said the women are supposed to be strip-searched only if there is probable cause that they are concealing contraband material. In those cases, she said, they are supposed to be searched by officers of the same sex. In the case of transgender women, that should mean a female officer if that is their stated preference.
ICE said it has a “zero tolerance policy” for abusive or inappropriate behavior in its facilities, including those for which it contracts, and that supervisors approve all strip-searches in advance.
“Searches performed on facility residents are designed to ensure the safety of both detainees and custodial personnel by detecting and controlling contraband,” the agency said, pointing to its guidelines that say cross-gender searches are conducted only in instances when no officer of the same sex is available. In the case of a transgender woman, that would mean a female officer should be called.
Ms. Fialho said the women are reluctant to complain about the incidents because they fear retribution, including solitary confinement or transfers to facilities farther away from their attorneys. One woman who refused a strip-search in December was quickly transferred to Arizona, then Louisiana, then to the Chautauqua County Jail in New York.
ICE’s detention practices have come under increasing scrutiny as advocates try to dismantle as much of the system as possible. The advocates argue that illegal immigrants are detainees, not prisoners, and have more rights.
In the case of women and children, a federal judge has agreed with the advocates, ruling last year that ICE violated a 1990s-era court settlement in keeping families detained. The judge ordered ICE to quickly process and release the families.
Immigration advocates also question ICE’s policy of contracting with local prisons and jails, including privately run facilities, to hold illegal immigrants.
Senate Democrats this week wrote a letter to President Obama saying a facility designed to hold those families costs $343 per person per day, or more than $800,000 each day to run the facility.


“Setting aside our significant due process and humanitarian concerns, we simply reject the notion that this is a wise use of funds,” the 22 senators wrote.
Source>http://www.washingtontimes.com/news/2016/jan/26/christina-fialho-illegal-immigrants-advocate-files/?page=all#pagebreak
Posted by theodore miraldi at 9:12 AM