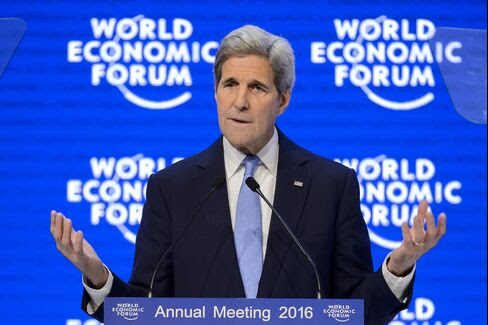 Much of the talk in Davos is of doom and gloom. One man isn’t so downbeat.
U.S. Secretary of State John Kerry struck a rare note of optimism Friday in a speech to executives preoccupied by the faltering world economy, China’s woes and the rise of geopolitical risk.
Yes, a “narrow tribalism, aggressive nationalism” and “violent extremists” present a real threat, but that isn’t the whole story, according to the top U.S. diplomat. Rather, the world should grasp “a powerful sense of confidence in what we can achieve,” he said.
“We are not living in a new normal” blighted by terrorism and war “and we don’t have to,” Kerry told an audience at the World Economic Forum in the Swiss ski resort. “We are not the prisoners of a predetermined future,” he said. “Change is occurring in our world for the better and it is occurring faster, moving faster than ever before.”
Kerry, who is in the final year of the Barack Obama administration, had brought a long list of reasons to be cheerful. He cited a rise in global life expectancy, the higher number of girls in education around the world, the deal that brought an end to Iran’s nuclear ambitions and an accord to limit climate change.
He even spoke in optimistic terms of the U.S.’s relationship with President Vladimir Putin, talking up the possibility that Russia may implement the Minsk peace accord in Ukraine, leading to the lifting of sanctions.
Kerry defended the fight against Islamic State, also known as Daesh, from the charge that there is no more evidence of progress. “Each day we are intensifying the pressure on Daesh,” he said. “Yes, the struggle is far from over, but we are headed in the right direction.”
Source>http://www.bloomberg.com/news/articles/2016-01-22/kerry-says-don-t-believe-the-hype-world-changing-for-the-better-ijppq8al
Posted by theodore miraldi at 1:21 PM