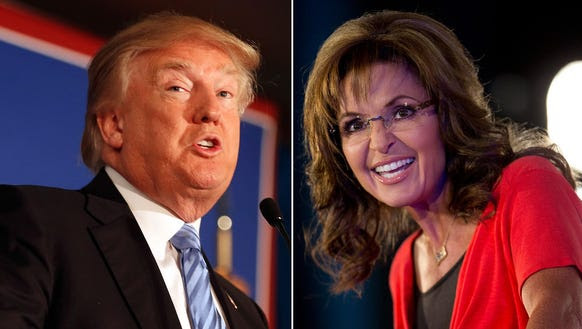 
It's official:  will endorse Donald Trump for president on Tuesday.
“I’m proud to endorse  for president,” Palin said in a statement to The New York Times. NBC News also reported that Palin would back Trump.
Earlier this week Trump touted on Twitter that he'd be making a "big announcement" on Tuesday in . A Facebook post from Trump on Sunday indicated he would have "a very special guest in attendance."
He teased it a bit more during a rally in New Hampshire on Monday, making it clear the announcement would be an endorsement. Ahead of the event, speculation focused on the possibility that Palin, the 2008 Republican vice presidential nominee and former Alaska governor, would be throwing her support behind Trump.
View image on Twitter

Pretty much everybody I know now believes Trump's special guest in Iowa tomorrow night is now going to be Sarah Palin.

A  adviser even pre-emptively sought to dismiss the possible endorsement as damaging to Palin's brand.
"I think it’d be a blow to Sarah Palin, because Sarah Palin has been a champion for the conservative cause, and if she was going to endorse Donald Trump, sadly, she would be endorsing someone who’s held progressive views all their life on the sanctity of life, on marriage, on partial-birth abortion," Cruz spokesman Rick Tyler said on CNN's New Day.
That didn't sit well with a certain member of the Palin family. Daughter Bristol Palin made clear on Tuesday what she hoped her mom would do in a blog post titled "Is THIS Why People Don’t like Cruz?" She wrote that she liked Cruz and believed all of the candidates were better choices than Hillary Clinton. However, she added, "after hearing what Cruz is now saying about my mom, in a negative knee-jerk reaction, makes me hope my mom does endorse Trump." She also noted that her mom supported Cruz in the past and blasted him for "turning against my mom."
She added: "You’ve also said, 'She can pick winners!'  I hope you’re right, and that she endorses Donald Trump today for President."
Bristol Palin's broadside against Cruz seemed to be based on Tyler's comments on CNN, not anything said by the Texas senator. In fact, Cruz himself was more conciliatory in a tweet Tuesday, saying he "will always be a big fan" of Sarah Palin's no matter what she decides about the 2016 race.

I love @SarahPalinUSA Without her support, I wouldn't be in the Senate. Regardless of what she does in 2016, I will always be a big fan.

Palin emerged as a leading voice of the  following the 2008 presidential election and was active during the 2010 midterm campaign, backing dozens of conservative GOP candidates across the country.
In recent years, though, she's been a less prominent figure, as other outsider, conservative candidates — such as Cruz — have emerged as favorites of the party's grass roots.
Palin and Trump have said kind words about each other during the campaign. Last summer, Trump indicated he'd love to have Palin as part of a Trump administration. The former Alaska governor told CNN in September that she'd be interested in serving as Energy secretary for Trump — "energy is my baby," she said — though she also noted she wanted to eliminate the department altogether, so it's unclear how that might affect her prospects for the job.
Source>http://www.usatoday.com/story/news/politics/onpolitics/2016/01/19/donald-trump-big-announcement/79001308/
Posted by theodore miraldi at 4:36 PM