Schlafly: National Review Is Not the Authority on Conservatism 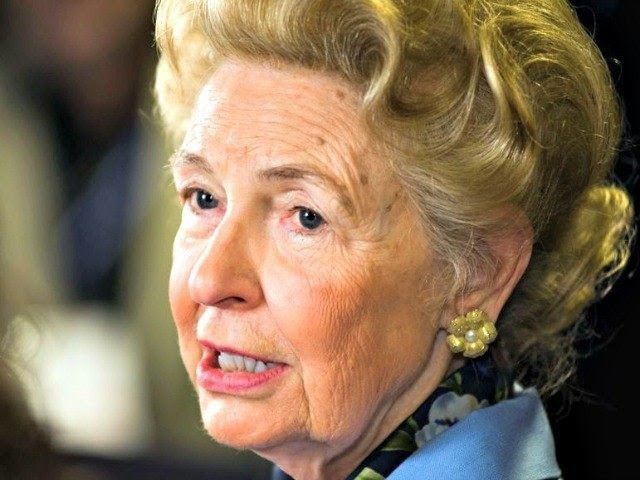 On Friday’s program of The Laura Ingraham Show, Schlafly declared, “I don’t recognize National Review as the authority on conservatism.” Schlafly blasted National Review for being more eager to fight Donald Trump than they are to fight the Republican donor-class, whom Schlafly calls the Kingmakers.

National Review is not the authentic conservative. You know, Bill Buckley was for giving away the Panama Canal, which was an enormous issue with conservatives. And in ten years they never wrote a single article about the Equal Rights Amendment, so they were no help against that. So I don’t recognize National Review as the authority on conservatism.

The 91 year-old Phyllis Schlafly helped launch the conservative movement and has been active in politics for more than one-fourth of American history.

In the interview, Schlafly explained that the problem with National Review is “just that they don’t want to fight the Establishment. And the Establishment– the people I call the Kingmakers– have been picking our candidates for so many years and they’ve given us a whole bunch of losers. And I think people want a fighter, and they also want to deal with the immigration problem. We don’t want to turn out like Germany. I thought the Germans were tough, but they’ve caved in to let people come in.”

In an exclusive interview with Breitbart News, Schlafly explained that immigration represents an existential issue for the nation:

If we don’t stop immigration—this torrent of immigrants coming in—we’re not going to be America anymore because most of the people coming in have no experience with limited government. They don’t know what that is. They look to the government to solve all of their problems, and as soon as we have a high majority of people who think that, it’s going to be a different country.

“The Kingmakers,” Schlafly told Breitbart, “have picked our last bunch of losers. And there’s one loser after another because they were more interested in maintaining their flow of money from the big donors and their cooperation with the Democrats—their bipartisanship—and that’s not my goal. I’m for America [Schlafly slams hand on table] and America first [slams hand on table again].”

“Trump is the only hope to defeat the Kingmakers,” Schlafly told Breitbart resolutely. “Because everybody else will fall in line. The Kingmakers have so much money behind them.”

“I think that we need to respect the will of the majority. Republicans ought to be a grassroots party. And the grassroots certainly agree with Donald Trump on most issues, but certainly on the immigration issue… I certainly think he represents everything the grassroots want,” Schlafly said.

Schlafly’s indictment of National Review was backed up by conservative Governor Mike Huckabee, who was interviewed by Ingraham later on the program.

Huckabee slammed National Review as “elitists” who are “completely out of touch with what conservatism means these days”:

This was a fool-hearted errand on the part of National Review. Why would they do this? It just shows though that this is the elitists who live in their own little bubble and they think they represent rank and file. I guarantee you, out here in Iowa, they are not representative and their views are not representative. They [National Review] want the [Trans-Pacific Partnership agreement] TPP. Well, they don’t want that out here… I just think that organizations like the National Review are completely out of touch with what conservatism means these days.

Adding to the criticism was former Presidential candidate Pat Buchanan. Buchanan also served as a senior advisor to Nixon and Reagan and has warned for decades against mass immigration, religious free trade, and military adventurism.

On Ingraham’s program, Buchanan slammed National Review’s writers as “Davos conservatives,” referring to the World Economic Forum of global elites who similarly went on the attack against Trump.

Since Buchanan lost the Republican Party’s nomination in 1996, more than 16 million immigrants have been permanently added to the U.S. population, not including their children. Between 1997 (three years after NAFTA took effect) and 2014, according to the Economic Policy Institute, “more than 5 million U.S. manufacturing jobs were lost… most of those job losses were due to growing trade deficits with countries that have negotiated trade and investment deals with the United States.”

Buchanan pointed out that National Review had previously attacked him as an “unpatriotic” conservative.

“Back in 2003 we were called ‘Unpatriotic Conservatives’ on the cover of the magazine for opposing a war in Iraq which we said was unnecessary and unwise, and it turned out to be unnecessary and unwise. There had never been any apology I’ve seen for that. There’s never been a withdraw of that accusation against a dozen friends of mine… who had stood up against the mood of the moment,” Buchanan said.