The contributory myth: what you pay in isn't what you get out 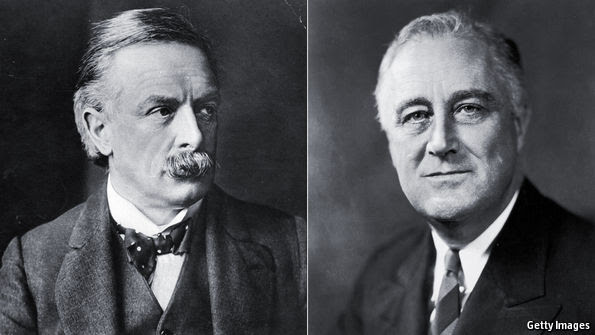 Buttonwood
EVERY time pensions or other old age benefits are reformed,
the debate is dogged by a familar refrain. It is unfair to cut benefits because people are only getting back what they paid in.To be fair, that misunderstanding of the system has been built into it from the start. In Britain, Lloyd George introduced the idea of contributory benefits and William Beveridge, the father of the Welfare State, said in 1942 that

Benefit in return for contributions, rather than free allowances from the State, is what the people of Britain desire

In America, when Franklin Roosevelt launched Social Security, he told Congress that

First, the system adopted, except for the money necessary to initiate it, should be self-sustaining in the sense that funds for the payment of insurance benefits should not come from the proceeds of general taxation.

Workers (and their employers) make national insurance contributions (in Britain) and pay payroll taxes (in America) and these payments generate the entitlement to future benefits (with an important exception, which we'll come to later). And in both Britain and America, there is a "fund", creating the impression that there is a big pot of money, and that the shares of Joe and Joanna Smith can be identified. But on both sides of the Atlantic, the fund is invested in government bonds - in other words, IOUs from the same government. The value of those bonds depends on the ability of future taxpayers to service them. In practice, then, the system is no different from a pay-as-you-go approach.
But in neither case, is the fund run on an actuarial basis, with the present value equal to the discounted value of all future benefits. As the report from the Social Security trusteesmakes clear, the fund is running down and will be exhausted by 2034

Social Security’s total expenditures have exceeded non-interest income of its combined trust funds since 2010, and the Trustees estimate that Social Security cost will exceed non-interest income throughout the 75-year projection period. The Trustees project that this annual cash-flow deficit will average about $76 billion between 2015 and 2018 before rising steeply as income growth slows to its sustainable trend rate after the economic recovery is complete while the number of beneficiaries continues to grow at a substantially faster rate than the number of covered workers.
Interest income and redemption of trust fund assets from the General Fund of the Treasury, will provide the resources needed to offset Social Security’s annual aggregate cash-flow deficits until 2034.

The British approach is even more rough-and-ready. An informative House of Commons report into the issue quoted the Institute for Fiscal Studies

The NI Fund is notionally used to finance contributory benefits, but in years when the Fund was not sufficient to finance benefits, it was topped up from general taxation revenues, and in years when contributions substantially exceed outlays (as they have every year since the mid-1990s), the Fund builds up a surplus, largely invested in gilts: the government is simply lending itself money. These exercises in shifting money from one arm of government to another maintain a notionally separate Fund, but merely serve to illustrate that NI contributions and NI expenditure proceed on essentially independent paths. The government could equally well declare that a quarter of NICs revenue goes towards financing defence spending, and no-one would notice the difference.

As currently constituted then, both funds are operating on the assumption that general taxpayers will eventually step in to fund benefits. Of course, Social Security recipients are general taxpayers too. But they may not be the same taxpayers; post-2034 US benefits will be paid by today's toddlers.
The second issue is that the amount you pay in, bears little relation to what you get out. Indeed, you can get benefits without paying anything. As our article on the new "flat rate" (it's anything but) state pension makes clear, you can qualify for the pension by looking after children, or sick and elderly relatives. Your proof may depend on receipt of child benefit or carers' allowance; ie, getting money out rather than putting it in. This is perfectly reasonable. Those who look after others are contributing to society. But it blows a hole in the idea that pensions represent the return of past payments.
A 2003 paper by John Hills said of the British system that

Since both funds face shortfalls in the intermediate future, policies for both programs will inevitably change, and those changes will greatly influence the benefits and taxes of current and future cohorts. From that perspective, future benefits are likely overstated, or taxes are understated (or both) for many typical households represented.

Benefit cuts or tax increases are inevitable. When that happens, let us have a debate on how best to distribute the pain, not on the idea that past payments are being "stolen" from their rightful recipients. It might even be better to scrap the distinction between payroll and national insurance and other taxes so the confusion doesn't arise.
Source>http://www.economist.com/blogs/buttonwood/2016/01/welfare-benefits-0

Posted by theodore miraldi at 11:31 AM