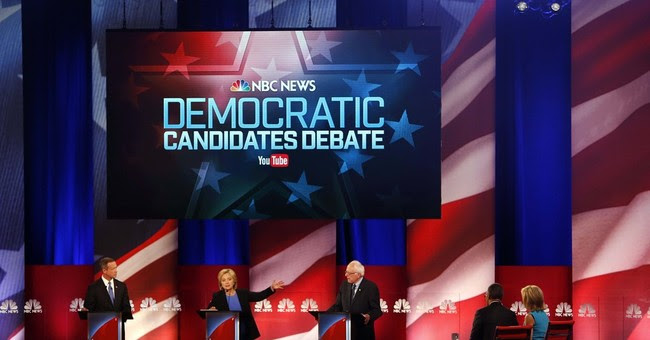 To hear the press tell it, the Republican Party has gone so far to the right that Ronald Reagan wouldn't recognize it. But the Democratic Party is at this moment on the cusp of forsaking Hillary Clinton for a self-described socialist who wants America to be exactly like Sweden. So precisely which party is making a historic tilt toward a new extreme?

Never, ever trust the liberal media to put politicians on a mainstream-to-extreme political scale. In their minds, Nancy Pelosi sits on the centerline of the political fulcrum. By that measurement, Jeb Bush looks like a fire-breathing extremist. And Ted Cruz, the original Cro-Magnon.
Take Jan. 13, the morning after the State of the Union. NBC "Today" host Matt Lauer was interviewing Gov. Nikki Haley, who gave the Republican response. She had made a comment about disliking the "angriest voices" in politics -- that is, Donald Trump. "Some very conservative voices in your party were not so happy," Lauer observed. Then he added, "Some people on the far right of your party wanted you to deliver a full-scale partisan political attack [on Obama]. You didn't see that as your mission, did you?"
So to be "far right" is to want a Republican response to Obama that actually responds to Obama. From there, Lauer moved on to complaining to House Speaker Paul Ryan that the House had voted to repeal the Affordable Care Act. "I think it's the 62nd time that's happened, and obviously the president vetoed it. Did you put out what you consider to be any kind of alternative?" They've put out several alternatives, and by pretending they haven't, Lauer is merely echoing Obama talking points.
On that same show on that morning, "Today" host Savannah Guthrie interviewed Hillary Clinton about the emerging threat from socialist Bernie Sanders. But there was no reference to a "far left." In fact, you'll never find that label attached to anyone on the far left, be it Clinton or Sanders or Obama. There's just "passion." "There's a lot of passion on the Democratic side for Bernie Sanders. Are you telling those voters to get real, he can't be elected; or to get real, he can't do the things he says he can do?" Later, Guthrie followed up: "Are you suggesting that Bernie Sanders is out there promoting a fantasy that can't come true?"
Socialism is a fantasy that never comes true, to be sure, but that's not what Guthrie meant. She meant: Are Democrats too idealistic in their pursuit of socialism?
On Jan. 15, CNN host Erin Burnett marveled that today's conservatives would still revere Ronald Reagan, since in his day "he tripled the national debt. Yet he grew government. Yet he raised taxes. These guys would hate that guy." No. They don't. She brought on liberal historian Douglas Brinkley, the court historian for John Kerry for President in 2004.
Since Reagan's era, he said, "It's kept getting more right and more right and more right. So today Reagan would be kind of a centrist Republican. He'd be more like Jeb Bush, maybe even more liberal than Jeb Bush on some issues." Burnett said, "More like Hillary Clinton, dare I say?"
Dare we say this is pure idiocy? This is your political brain on drugs.
Ronald Reagan would look at Obama's socialist schemes and massive debt pile-up and form a tea party two seconds later.
Meanwhile, The Washington Post reported a poll of Iowa voters by Selzer & Co. for the Des Moines Register that asked likely voters in the Democrat caucuses if they would use the word "socialist" to describe themselves. Forty-three percent said "Yes," more than the numbers who identified themselves as capitalists, 38 percent.
It's unlikely Erin Burnett or Savannah Guthrie will pass that number around. Or observe how Lyndon Johnson today would be more like his fellow Texan Ted Cruz than those presently in control of the Democratic Party.
Source>http://townhall.com/columnists/brentbozell/2016/01/20/the-medias-cockeyed-political-spectrum-n2106937/page/full
Posted by theodore miraldi at 7:43 AM