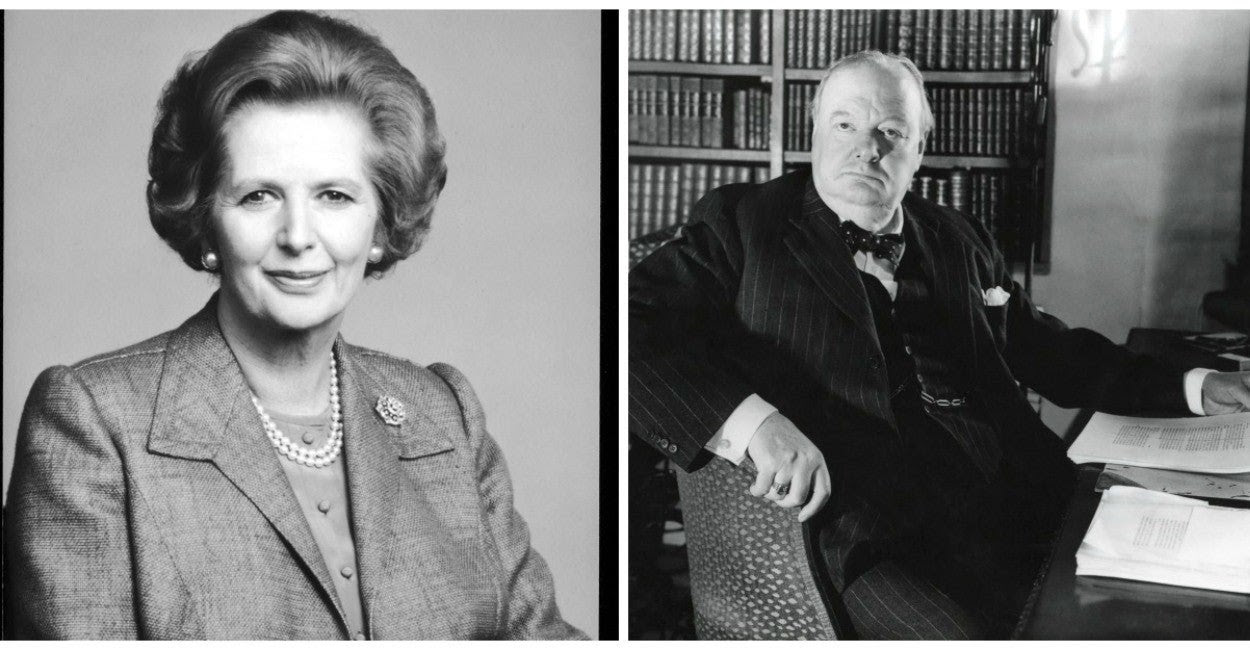 Helle Dale
At a time when the United States faces multiple dangers from abroad, a lack of presidential leadership has many Americans deeply unnerved.
However, it does not have to be this way. Throughout history, many extraordinary individuals have risen to meet overwhelming threats to their nations. These individuals have been able to use talent, a devotion to principle, and a tremendous courage to guide their countries. Two examples of leadership at the highest level can be seen through British Prime Ministers Winston Churchill and Margaret Thatcher.
Churchill
Winston Churchill, of course, is best known as Britain’s great wartime leader, a man of innumerable talents, idiosyncrasies and an ironclad devotion to constitutionalism. He is the subject of “Churchill’s Trial: Winston Churchill and the Salvation of Free Government” by Larry Arnn, president of Hillsdale College.
The salvation of free government is something that should be on the minds of Americans today, as well, and there is much to take away from the challenges Churchill faced in the course of his political life.
Arnn’s biography focuses on the three great challenges of the 20th century, Nazism and Communism from abroad, and Socialism from within the United Kingdom (when post-war Labour government’s nationalization of industry threatened to engulf Britain).
As Churchill knew, free government, even as old as Britain’s is rare, and always requires vigilance. There is much to take away for American readers from the challenges Churchill faced and helped overcome in the course of his political life. As Dr. Arnn says, “Churchill’s trial is also our trial. We have a better chance to meet it because we had in him a true statesman.” Without a doubt, the same can be said for Margaret Thatcher.
Thatcher
When re-elected in 1983, one of Thatcher’s first challenges was to face down the British National Union of Miners, which through nationwide strikes brought Britain’s industry to its knees, and had dictated British politics during the 1970s.
She also faced down the Irish Republican Army, which nearly killed her in the bombing of the Conservative Party conference in Blackpool in 1984 (killing five others). Through courage and her principles Thatcher was able to overcome both the IRA and the British National Union of Miners.
Thatcher went on to became a force on the world stage, as Charles Moore recounts in the second volume of his Thatcher biography, “Margaret Thatcher – At Her Zenith: In London, Washington, and Moscow.”
Thatcher transformed relations with continental Europe, and reformed and reinvigorated the British economy. Through her partnership with Ronald Reagan, she laid the groundwork for the end of the Cold War. After she was forced out of office by internal party politics, she remained true to her principles and vision, founding The Margaret Thatcher Center for Freedom at the Heritage Foundation.
Both Thatcher and Churchill will be discussed at the Heritage Foundation this week as subjects of new books. Margaret Thatcher will be discussed on Jan. 25 at 11 a.m., “Margaret Thatcher – At Her Zenith: In London, Washington, and Moscow” and Winston Churchill in “Winston Churchill and the Salvation of Free Government” on Jan. 27 at 11 a.m.
Source>http://dailysignal.com/2016/01/25/why-the-us-should-look-to-the-leadership-of-churchill-and-thatcher/?utm_source=heritagefoundation&utm_medium=email&utm_campaign=morningbell&mkt_tok=3RkMMJWWfF9wsRovvavKZKXonjHpfsX56u8tUaO1lMI%2F0ER3fOvrPUfGjI4ASMViMa%2BTFAwTG5toziV8R7jHKM1t0sEQWBHm
Posted by theodore miraldi at 8:12 AM