Abortion access in the U.S. has been vanishing at the fastest annual pace on record, propelled by Republican state lawmakers’ push to legislate the industry out of existence. Since 2011, at least 162 abortion providers have shut or stopped offering the procedure, while just 21 opened.
At no time since before 1973, when the U.S. Supreme Court legalized abortion, has a woman’s ability to terminate a pregnancy been more dependent on her zip code or financial resources to travel. The drop-off in providers—more than one every two weeks—occurred in 35 states, in both small towns and big cities that are home to more than 30 million women of reproductive age.
No region was exempt, though some states lost more than others. Texas, which in 2013 passed sweeping clinic regulations that are under scrutiny by the Supreme Court, saw the most: at least 30. It was followed by Iowa, with 14, and Michigan, with 13. California’s loss of a dozen providers shows how availability declined, even in states led by Democrats, who tend to be friendly to abortion rights.
Stand-alone clinics, not doctors’ offices or hospitals, perform the vast majority of pregnancy terminations. They account for the vast majority of the tally, which was compiled by Bloomberg News over the past three months and builds on a similar undertaking from 2013.
Typically defined by medical researchers as facilities that perform 400 or more abortions per year, the ranks peaked in the late 1980s at 705, according to the Guttmacher Institute, a New York-based reproductive-health research organization. By 2011, the most recent year for which Guttmacher has data, that number had fallen to 553. 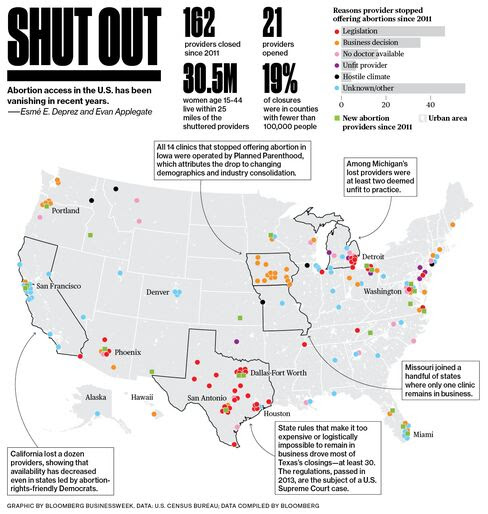 Bloomberg’s reporting shows that the downward trend has accelerated to the fastest annual pace on record since 2011, with 31 having closed or stopped performing the procedure each year on average.
State regulations that make it too expensive or logistically impossible for facilities to remain in business drove more than a quarter of the closings. Industry consolidation, changing demographics, and declining demand were also behind the drop, along with doctor retirements and crackdowns on unfit providers.
Texas stands as a case study in the way abortion opponents have changed strategies, opting for legislative action over the clinic blockades and violence of the past.
Most providers there closed after the state became the largest and most populous in the U.S. to require that they become hospital-like outpatient surgical centers, which can cost millions to buy or build. The state also mandates that doctors have admitting privileges at nearby hospitals. The drop-off in access has helped depress the abortion rate in the state by 13 percent, according to a July study, and providers there say full implementation of the law would leave almost a fifth of Texas women 150 miles or more from a facility.
Summit Women’s Center in Bridgeport, Conn., closed in 2015 after 40 years in business, citing reduced demand. In Kalispell, Mont., Susan Cahill said she didn’t have the money to rebuild after her practice got vandalized in 2014. Following the loss of two providers, Missouri is now one of five states in which a sole clinic remains. Of all the facilities in the nation that closed or stopped performing terminations, about a third were operated by Planned Parenthood; of the ones that opened, three-quarters were.
That just 21 new clinics opened in five years underscores the difficulty the industry has faced in replenishing the ranks of health-care providers willing and financially able to operate in such a fraught field. The impact of that challenge is likely to be long-lived: Even rarer than the building of a new clinic is the reopening of one that has shut.
Source>http://www.bloomberg.com/news/articles/2016-02-24/abortion-clinics-are-closing-at-a-record-pace

Posted by theodore miraldi at 10:47 AM