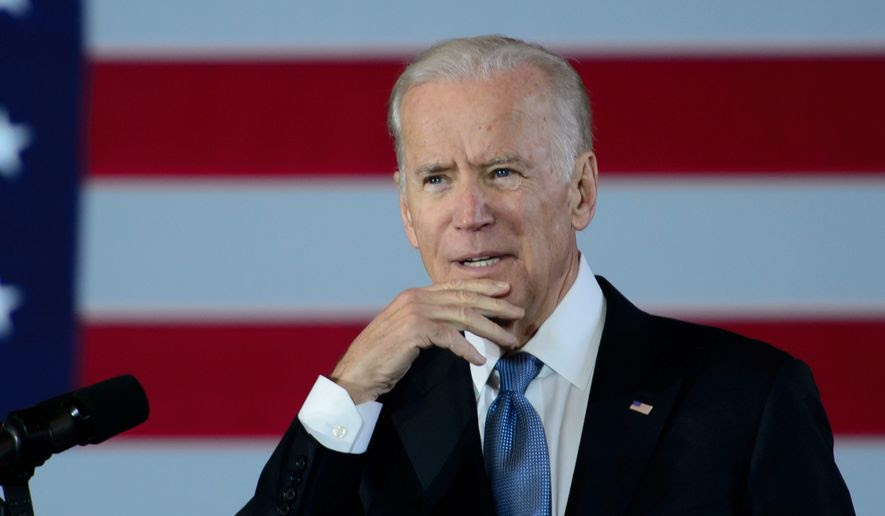 Photo by: Glen StubbeRepublicans have unearthed a speech by Vice President Joseph R. Biden from 1992 in which he said then-President George H.W. Bush's attempt to fill a Supreme Court vacancy should wait until his successor came into office in 1993. The GOP charges that Mr. Biden is now backing President Obama's lame-duck attempt to similarly fill a vacancy before his term ends in January. (Star Tribune via Associated Press)

It may be Vice President Joseph R. Biden who dooms President Obama’s hopes of reshaping the Supreme Court and picking a replacement for the late Justice Antonin Scalia after Republicans unearthed a 1992 speech in which then-Sen. Biden said it was “not fair” to let a lame-duck president make such an important decision.
Mr. Biden, who was chairman of the Judiciary Committee at the time, was laying down a marker against President George H.W. Bush, saying once the “political season” had started, the president should back down and wait until after the election.
Mr. Biden went so far as to say that Mr. Bush shouldn’t even bother to nominate anyone, much less have the Senate approve the pick — exactly the stance Republicans are now taking toward Mr. Obama.
“These are the Biden rules,” Sen. Chuck Grassley, the Iowa Republican who now chairs the Judiciary Committee, said Monday as he recounted the Biden speech on the Senate floor.
The attack comes as Republicans are stiffening their spines after a wobbly start to the political jockeying after Scalia’s death Feb. 13.
“One would have to go back more than a century to find a scenario where a president’s nominee for the Supreme Court was confirmed by the opposition party in the Senate when the vacancy occurred during an election year,” said Sen. Jeff Flake, Arizona Republican. “I’m not about to break new ground in the Senate, particularly when any nominee could so drastically shift the balance of the court.”
The death of the high court’s most forceful and consistently conservative justice has created an opening for Mr. Obama, who, if he were to win confirmation of a committed liberal justice, could send the bench careening to the left.
But standing in his way is not only a committed Republican opposition, which controls the Senate, but Democrats’ own long history of words and deeds that suggest they would not have approved a Republican president’s pick if circumstances were reversed.
The White House has already had to say Mr. Obama now regrets taking part in Democrats’ 2005 attempt to filibuster Justice Samuel Anthony Alito Jr. — the first time a partisan filibuster was ever launched against aSupreme Court nominee.
Mr. Biden’s comments cut even deeper, with the former senator saying in his 1992 speech that not only does the Senate have the right to reject nominees, but presidents shouldn’t even try to send one to Capitol Hill in the middle of an election.
“Once the political season is underway, and it is, action on a Supreme Court nomination must be put off until after the election campaign is over,” Mr. Biden said in his 90-minute speech, which was so long it spanned 15 pages of the Congressional Record. “That is what is fair to the nominee and is central to the process.”
He delivered the speech on June 25 of that year, in anticipation of a justice retiring at the end of the court’s term. In the event, no retirement came and his threat to stall a nominee was never tested.
In a statement Monday, Mr. Biden said his comments were being taken out of context. He pointed to other parts of his lengthy speech in which he called for senators and the executive branch to try to repair the process, which he said had been broken by ideological fights.
“While some say that my comments in June 1992 contributed to a more politicized nomination process, they didn’t prevent the Senate from fulfilling its constitutional duties, because there was no vacancy at the time,” he said. “During my career on the Judiciary Committee, I ensured the prompt and fair consideration of nine Supreme Court Justices, and the current Senate has a constitutional duty to do the same.”
Mr. Biden said during his time as chairman he held hearings on several nominees he opposed, and Democrats gave them floor votes — though they were defeated.
Among those was Judge Robert Bork, whose defeat at the hands ofSenate Democrats helped ignite the partisan warfare over judges that continues to this day.
Democrats in the Senate now waved off Mr. Biden’s comments as irrelevant to the debate.
“It doesn’t make any difference to me. I wasn’t here then. I don’t believe that, and I don’t believe in the process of keeping the Supreme Courtwithout a full complement for a year,” said Sen. Robert Menendez, New Jersey Democrat. “Equal justice under the law, which is what it says over the front of the Supreme Court, means a court that is fully functioning and can make decisions and hopefully doesn’t find itself tied too often.”
Sen. Richard Blumenthal, Connecticut Democrat, said voters want to see the president make a nomination and the Senate vote on it. “They want hearings and a vote. They want action,” he said.
Early on, polling suggested Americans were split on that question, but more recent polling indicates Democrats are winning the argument. A new survey released Monday by the Pew Research Center found 56 percent said the Senate should hold hearings and a vote, compared to 38 percent who said the next president should make the nomination.
That Republicans would reject an Obama nominee seems certain. The question has instead become whether Mr. Obama should even bother to send a name up to the Senate, and whether the Senate would bother to hold hearings.
Sen. Susan M. Collins, Maine Republican, said she wanted to see theSenate go ahead with hearings if Mr. Obama submits a nominee. “For my part, I think regular order is the best way to proceed,” she said.
Majority Leader Mitch McConnell said Monday that Mr. Obama has the “authority to nominate.” But he said the Senate has “the right to withhold its consent.”


“Given that we are in the midst of the presidential election process, the chairman of the Judiciary Committee and I believe that it is today the American people who are best positioned to help make this important decision — rather than a lame-duck president whose priorities and policies they just rejected in the most recent national election,” Mr. McConnell said as he closed the Senate session.
Source>http://www.washingtontimes.com/news/2016/feb/22/joe-bidens-1992-opposition-to-lame-duck-supreme-co/?page=all#pagebreak
Posted by theodore miraldi at 8:17 AM