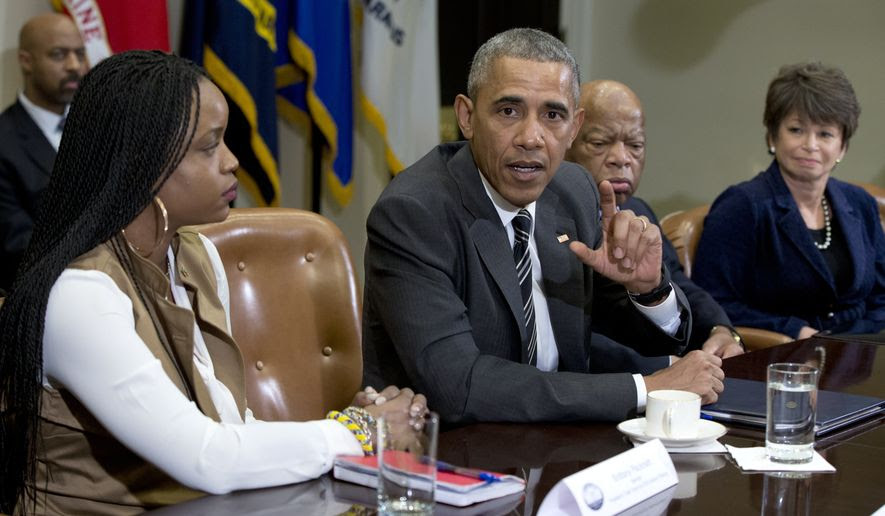 Photo by: Carolyn KasterPresident Barack Obama speaks to the media at a meeting with civil rights leaders in the Roosevelt Room of the White House in Washington, Thursday, Feb. 18, 2016. From left are, Brittany Packnett, the president, Rep, John Lewis, D-Ga., and Senior White House Adviser Valerie Jarrett. During the meeting the president discussed a range of issues, including the Administration’s efforts on criminal justice reform, building trust between law enforcement and the communities they serve and the President’s priorities during his final year in office. (AP Photo/Carolyn Kaster)
Jessica Chasmar
The co-founder of Black Lives Matter Chicago rejected President Obama’s invitation to discuss the movement’s goals at the White House, calling it a “sham” that would only serve as a photo opportunity for the president.
In an op-ed for Truth-Out.org, Aislinn Pulley wrote that she “respectfully declined” her invitation to the White House to discuss criminal legal reform and to celebrate Black History Month.
“I could not, with any integrity, participate in such a sham that would only serve to legitimize the false narrative that the government is working to end police brutality and the institutional racism that fuels it,” she explained.
The White House hailed Thursday’s meeting with Black Lives Matter activists and veteran civil rights leaders as a “first of its kind.” Attendees included Baltimore mayoral candidate DeRay Mckesson, Deshaunya Ware, a student leader of the University of Missouri protest group Concerned Student 1950; Al Sharpton, president of the National Action Network, and NAACP President Cornell Brooks. Mr. Obama didn’t address Ms. Pulley’s absence when he spoke to reporters after the meeting, CNNsaid.
Ms. Pulley wrote: “I was under the impression that a meeting was being organized to facilitate a genuine exchange on the matters facing millions of Black and Brown people in the United States. Instead, what was arranged was basically a photo opportunity and a 90-second sound bite for the president.
“If the administration is serious about addressing the issues of Black Lives Matter Chicago — and its sister organizations that go by different names across this nation — they can start by meeting the simple demands of families who want transparency, and who want police that kill Black people unjustly to be fired, indicted and held accountable,” she wrote. “A meeting arranged to carry this out is one that would be worthy of consideration. Until this begins to happen on a mass scale, any celebrations of Black history that go on inside the walls of the White House are hollow and ceremonial at best.
“No proponent of this system — Democrat or Republican — will upend the oppressive structures that maintain it,” she concluded. “To hold the powerful accountable for their harmful and oppressive actions, we must continue to build power in the streets. We must act in concert and in coalition within our communities, because together, we have the power to uproot all oppression and systemic violence.”
Source>http://www.washingtontimes.com/news/2016/feb/19/aislinn-pulley-black-lives-matter-leader-slams-oba/
Posted by theodore miraldi at 4:52 PM