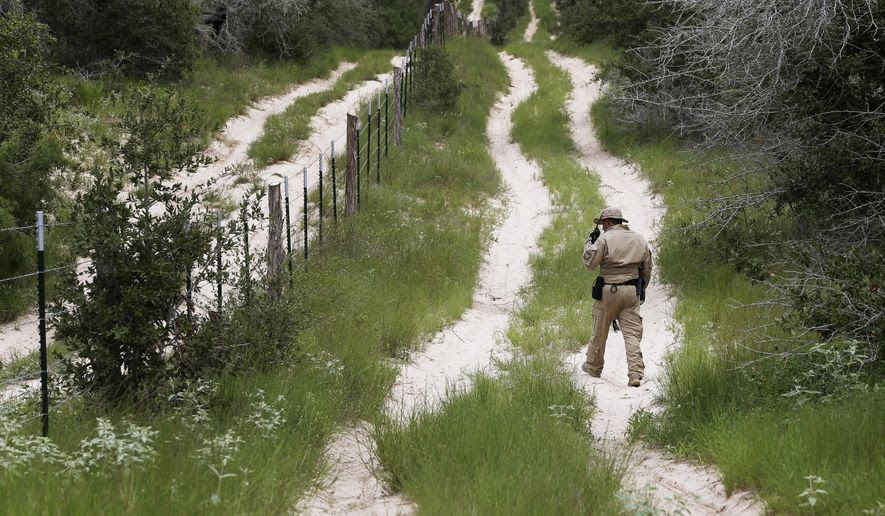 In this Sept. 5, 2014, file photo, a U.S. Customs and Border Protection Air and Marine agent looks for signs along trail while on patrol near the
Texas-Mexico border near McAllen, Texas. (AP Photo/Eric Gay, File)


Multiple U.S. Customs and Border Protection bases near the Mexicoborder have serious security gaps, including “inoperable” security cameras and at least one security gate repeatedly being left wide open, according to a new federal watchdog Mexico border, the IG said. The west Arizona desert area where one base is located is “very active in illegal cross border activity involving aliens and narcotics,” CBP officials noted in their official response to the report. Read more: http:/dailycaller.com/2016/02/19/border-patrol-leaving-security-gates-wide-open/#ixzz40kNnDzim” target=”_blank”>report.

Inspectors from the Department of Homeland Security’s Office of Inspector General found four posts where agents live and work for a week at a time that have inoperable security cameras, which increases the likelihood of a security breach, according to the report published Friday.
Other posts had inadequate access controls and CBP personnel were not conducting regular security inspections on the facilities.
“If agents cannot perform this task, the FOB (forward operating base) is more vulnerable to a security breach,” the report said.
Regional agency officials asked the CBP’s Facilities Management and Engineering division to fix the security cameras in January 2013. As of August 2014, the cameras were still broken and officials requested the fix again. The facilities office marked the work order closed in August 2014, but the cameras were still broken when IG inspectors visited in April 2015.
Inspectors visited one base at an undisclosed location and found the entrance gate was left open. After interviewing several employees, investigators were alarmed to discover the manual gate is “repeatedly left open.”
“The primary purpose of the perimeter fence is to control access to the FOB. The practice of leaving the gate open increases the likelihood of someone gaining unauthorized access to the FOB” the report said.
In 2011, regional officials requested funds from CBP to upgrade the manual gate to an electronic one. To date, the gate has not been upgraded, according to the report.
The CBP bases are located in important — and often dangerous — places along the U.S.-Mexico border, the IG said. The west Arizona desert area where one base is located is “very active in illegal cross border activity involving aliens and narcotics,” CBP officials noted in their official response to the report.
Source>http://www.washingtontimes.com/news/2016/feb/20/border-patrol-bases-have-inoperable-security-camer/
Posted by theodore miraldi at 8:45 AM