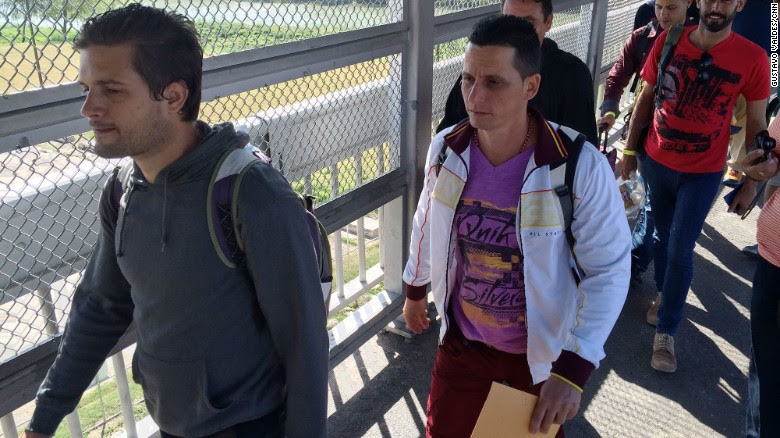 Gustavo Valdes
(CNN)Eight-year-old Vanesa Amador stands patiently on a bridge that joins Mexico and the United States. She is feet away from a country she admits she knows nothing about but has strong feelings for.
"The United States is the best country in the whole world," she says, smiling.
Vanesa and her mother, Mayra, are part of a group of about 120 Cubans who made a long journey through several Latin American countries before boarding a charter plane in Costa Rica to Nuevo Laredo, Mexico, the border town with Laredo, Texas.
The number of Cubans entering the United States nearly doubled last year, compared with the year before. That trend shows no signs of slowing. More Cubans are coming to the United States because they fear that a thaw in U.S.-Cuban relations will end a longstanding policy granting legal status to any Cuban national who reaches dry land in the United States.
Two in three Cubans who came to the United States to stay in the last two years arrived in Laredo. They consider this the beginning of a life different from the one they left on their native island.
"We want to be free," says Claudia Gonzalez, who says the situation in her country is unbearable.
Their wait is not long. After lining up on the spot where a metal plaque marks the official end of Mexico, U.S. Customs and Border Protection agents escort them to a checkpoint, where they provide them with a form to request entry into America.

Since 1966, hundreds of thousands of Cubans have benefited from a law known as the Cuban Adjustment Act, which allows them to enter the country to live and work, and puts them on a fast track for citizenship.
The law is a result of the tense relations between Washington and Havana during the Cold War.
In 1996, the Clinton administration amended the law to limit the benefits to those who make it to dry U.S. soil, excluding thousands who were intercepted by the Coast Guard as they attempted to reach America by sea.
According to a study by the Pew Research Center, the number of Cubans reaching the U.S. began to increase in 2012 after the Cuban government eliminated restrictions for its citizens to leave the country. Most of them traveled to Ecuador, from where they found ways to reach the U.S.-Mexico border.
And Cuban migration spiked in the last two years after U.S. President Barack Obama and Cuban President Raul Castro reestablished diplomatic relations between the former Cold War foes. Some migrants, like Irene Melian, fear that could bring an end to immigration benefits for Cubans.
"It could be more difficult for us," she said as she was called by an immigration agent to be processed.
Customs and Border Protection figures show that between 2005 and 2011, an average of 10,000 Cubans a year entered the U.S. From October 2013 to December 2015, more than 80,000 entered the country.
Most entered the U.S. through the Port of Laredo, where U.S. Border and Custom protection officials say they've adjusted their logistics to handle an average of 120 Cubans who arrive daily. Without offering specifics, they say they make sure they have the necessary staff to verify documents of the migrants, collect their biometric data and perform background checks without affecting commerce and other travelers at one of the busiest in international crossing points in the world.
They also work with Mexican authorities, who escort the buses taking the Cubans from the Nuevo Laredo Airport to the bridge and make sure that not all arrive at the same time.

Congressman: 'It's not fair'

But while these immigrants are not an issue for the city of Laredo and its residents, since almost all of them travel to other cities within days if not hours, U.S. Rep. Henry Cuellar, D-Texas, says he thinks it's time to start treating Cubans like any other migrants who want to be allowed into the United States.
"It's not fair," says Cuellar, noting that Cubans get immediate help from the federal government via food stamps and resettlement aid, and they qualify for programs not available to other immigrants.
He compares their situation with that of the tens of thousands of Central American migrants, many of them minors, who also reach the U.S. through his district, which reaches part of the Rio Grande Valley. "They are arrested by the Border Patrol, have to face an immigration judge and always have the fear of being deported," he explains.
Cuellar says he's working with colleagues on Capitol Hill to repeal the Cuban Adjustment Act, something he admits is a hard sell. He says another bill to stop the financial benefits for Cuban refugees has a better chance to gain support.
He also notes the silence from the White House on the issue of Cuban migration.
"They've talked about the Central American migrants, but they've not talked about Cuba. Maybe they don't want to rock the boat while they're going to Cuba." He says.

'I hope he talks to the real people'

Obama is headed to Havana on March 21, the first U.S. president to do so in 88 years. Cuellar supports the President's efforts to improve relations between the two countries, but he hopes Obama addresses the migration issue while in Havana, as well as the lack of political freedoms on the island and other human rights issues.
That's a sentiment shared by many of the migrants waiting to see an immigration officer at the Laredo border crossing.
"I hope he talks to the real people," says Melian, the migrant waiting at the Laredo border crossing. "I hope he doesn't allow himself to be fooled by the Castros as they fooled the world for many years."
About an hour after this group of Cubans set foot in America, some of them walk away with a stamp on their passport allowing them to travel anywhere in the country. Many of them have family or friends waiting.
Little Vanesa says she is happy to be here, although she doesn't know what is next for her. She admits she'll miss her grandparent who stayed in Cuba and she won't be able to see for a while.
Source>http://www.cnn.com/2016/02/25/americas/cuba-migrants-u-s-/
Posted by theodore miraldi at 9:47 AM