Dueling would provide a much-needed corrective to our increasingly vulgar and reckless politics. 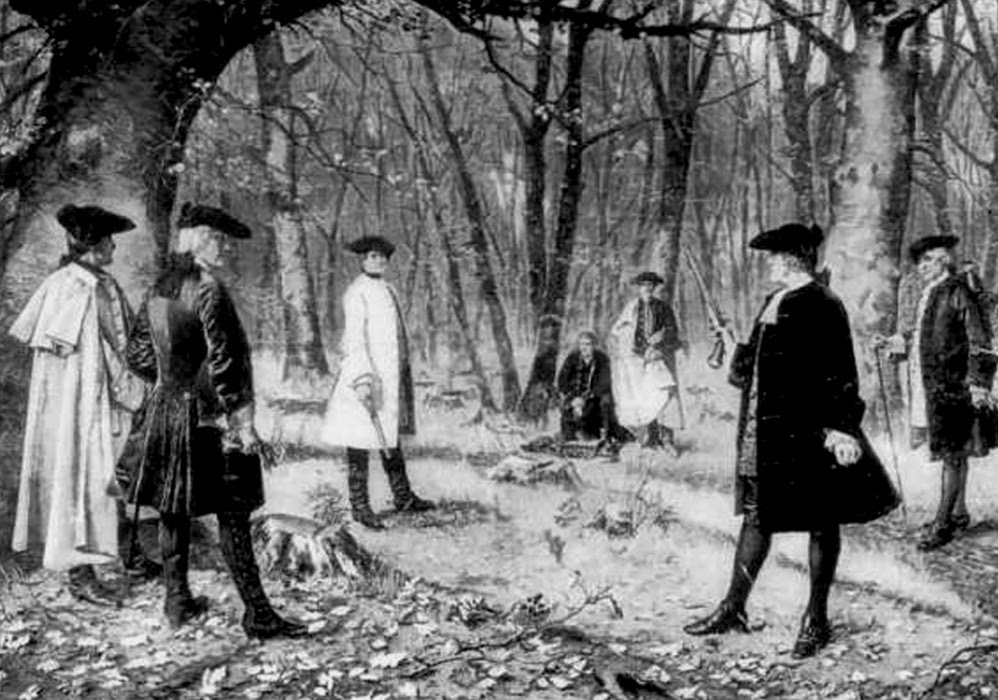 
In a recent debate, Donald Trump accused fellow candidate Ted Cruz of being “the single biggest liar” in the Republican race. He didn’t stop there, punctuating the insult by adding that the Texas senator was “probably worse than Jeb Bush.” This ugly dig — leveled by a billionaire in front of tens of millions of television viewers — was nothing less than character assassination.
These days, though, there’s really no way to fight back against attacks on your honor. You can whine about them, or you can respond with your jabs, but little else. (And Cruz is no amateur on either count.) We’ve spent centuries tempering our Darwinian instinct to swing our clubs at the heads of men who threaten or insult us. This has, in the aggregate, served society quite well. And yet, I can’t help but wonder if the lack of consequence associated with our words and deeds has fed another kind of detrimental vulgarism.
People typically adjust their behavior to the level of risk they face — or so the theory goes. Would Harry Reid falsely accuse Mitt Romney of not paying his taxes if the latter could challenge the Nevada senator to a duel to regain his good standing? Would a politician question an opponent’s Christian faith if that opponent could prove his piousness by shooting the accuser dead? Probably not.
Not that most duels ever ended in bloodshed, mind you. Combatants were represented by a second — a friend, colleague, trusted member of society, or relative — who would diligently negotiate a resolution between the parties to avoid any real violence. People are incentivized to act decently when they are responsible for saving lives.
People are incentivized to act decently when they are responsible for saving lives.
If it ever got to the fight — and as a libertarian I have no problem with people voluntarily working out their difficulties at the Weehawken or Bladensburg dueling grounds — there is a strict set of codified rules that all gentleman must follow. Today, they can’t even follow debate rules. The Code Duello, written by a gaggle of Irishmen, contained more than two dozen rules for would-be duelists (for example, the number of shots or wounds that would satisfy honor). Later in 1838, South Carolina Governor John Lyde Wilson wrote an American version of dueling etiquette called “The Code of Honor; Or Rules for the Government of Principals and Seconds in Duelling.” It is an incredible look into the concept of honor in pre-Civil War South:

If a man be smote on one cheek in public, and he turns the other, which is also smitten, and he offers no resistance, but blesses him that so despitefully used him, I am aware that he is in the exercise of great Christian forbearance, highly recommended and enjoined by many very good men, but utterly repugnant to those feelings which nature and education have implanted in the human character.

Unlike Europe, where dueling was based on aristocratic honor codes and restricted to men of certain classes, here in egalitarian America, men of all backgrounds could participate in duels. Women would as well. Most famously, in 1792’s “Petticoat Duel,” Lady Almeria Braddock challenged Mrs. Elphinstone after the latter said something unflattering words about the former’s woman’s age. The two dueled in Hyde Park, first with pistols before taking up swords to settle the matter. Both survived.
The great Democrat, Andrew Jackson, supposedly participated in six duels with much success. No less an American hero, young Abraham Lincoln was almost involved in a duel before honor was restored.
Is Donald Trump a more honorable man than Abraham Lincoln? I think not. Right now, the leading candidate in the GOP race is celebrated by his fans for his vulgarity and eagerness to attack the dignity of others. People confuse this incivility — and he’s not alone — as a statement against political correctness. It isn’t. That would entail using ideological or cultural rhetoric that others have deemed morally unacceptable. Not calling a rival candidate a “pussy.”
I’m not saying violence is the answer. I’m saying violence is an answer.
Yet, the more personal and boorish his invective gets, the more Trump fans are awestricken. The belief that tough-guy Trump is a “fighter” propels his candidacy, even though pampered scions of wealth rarely have to fight for anything. And his success will only produce others who’ll ape this strategy.
I think we can all agree dueling would be a much-needed corrective.
Now, please don’t misunderstand me, I’m not saying violence is the answer. I’m saying violence is an answer. Because sometimes a witty retort on Twitter simply can’t recapture your lost honor. Dueling would confer consequences onto all the ugly, dishonest, uncouth, untrue, and defamatory things people say about you or your family. Yes, some politicians might be struck down if we allowed this ancient combat to reemerge in contemporary society. But I’m sure that’s a sacrifice most of us would be willing to make.
Source>http://thefederalist.com/2016/02/19/bring-back-dueling/
Posted by theodore miraldi at 1:36 PM