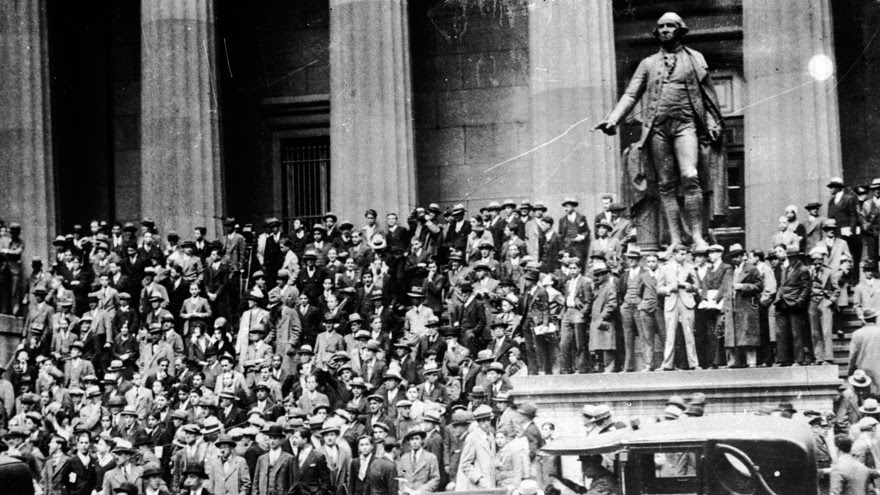 Huge crowds outside the Sub Treasury Building (now Federal Hall National Memorial) and the statue of George Washington, opposite the New York Stock Exchange at the time of the Wall Street Crash, October 1929. (Photo by Keystone/Getty Images)

One view of what caused the Great

Depression in the 1930s is that the Federal

Reserve failed to prevent a collapse in the

John Coumarianos
This is the famous thesis of Milton Friedman’s and Anna Schwartz’s A Monetary History of the United States, 1867-1960, and it was, more or less, the view of Ben Bernanke when he was chairman of the Federal Reserve.
The global economy today resembles that of the 1930s in several ominous ways.
Financial author Edward Chancellor recently called attention to a paper written by Caludio Borio, head economist at the Bank of International Settlements, that provides a fuller picture of the causes of the Great Depression. The paper also draws parallels between global economic conditions that led to the rise of protectionism in the 1930s and our situation now.

The $100 bill is one of America's most popular notes, but could it be put out of circulation? WSJ's Joshua Zumbrun joins Tanya Rivero to discuss. Photo: iStock
The paper’s thesis is that “financial elasticity” characterizes both the pre-Depression global economy and today’s global economy.  Elasticity refers to the buildup of capital imbalances such as money flows into emerging markets because of low rates in developed markets.
Free flowing capital to emerging markets
As Chancellor tells it, the gold exchange standard established in the 1920s allowed U.S. and U.K. bonds to be used together with gold in exchange transactions among central banks. This arrangement encouraged growth in foreign lending.
Specifically, the U.S. lent money to emerging markets in Latin America and Central Europe. Investors in the U.S. enjoyed higher returns for seemingly little extra risk as defaults were initially low.
However, lending standards began to loosen, and American investors brought their dollars home after the Fed hiked rates in 1928. Money flowed into U.S. stocks, among other things, which, of course were poised for a crash.
Capital flow reversal
This reversal of capital flows, combined with a drop in commodity prices, destabilized the emerging markets by 1929, sending their commodity producers into bankruptcy. In 1930, several South American countries devalued their currencies and defaulted on their debt.
The crisis spread to Austria, Germany, and eventually to Britain, a heavy lender to Central Europe. Britain eventually devalued its currency, but in the U.S. the Fed actually raised rates in late 1931 to stem gold outflows. A banking panic ensued, as the U.S. finally “felt the full force of the world depression,” according to Chancellor.
The result of these debt problems was the institution of capital controls. Capital no longer flowed freely among countries. International trade slowed due to tariffs, and foreign debts were not repaid. Economist John Maynard Keynes himself favored the move away from globalization, and Chancellor quotes him as writing, “Let goods be homespun, and, above all, let finance be primarily national.”
Today’s similarities with the 1930s
Now, as in the 1930s, the global economy is stretched. A low interest-rate regime in the developed world has encouraged lending to emerging markets. Additionally, China’s and Europe’s banking systems are burdened with bad debts.
Moreover, last year, as Chancellor reports, emerging markets experienced theirfirst capital outflows in nearly three decades, and that movement of capital appears to be continuing in 2016. Ratings agencies have downgraded South Africa and Brazil sovereign debt, while commodity prices continue to plunge.
Protectionism is in the air with the European Union and the U.S. imposing tariffs on Chinese steel. Also, anti-immigration sentiment is rising.
Although the additional restrictions imposed by a gold standard don’t exist today,the peg of Chinese yuan to the U.S. dollar DXY, -0.22%  is unsustainable in Chancellor’s opinion, as may be the euro EURUSD, +0.1800%
So much elasticity or the buildup of imbalances can be painful during the process of restoring balance. Therefore, regarding monetary policy, it’s important, according to Borio, to lean “against the build-up of financial imbalances even if near-term inflation remains low and stable.”
Borio’s paper was written in August 2014, so it’s difficult to know what advice he’d have for the Federal Reserve today. But in his paper, he notes that the imbalances that low rates and elasticity produce may “return us to the modern-day equivalent of the divisive competitive devaluations of the interwar years; and, ultimately, [trigger] an epoch-defining seismic rupture in policy regimes, back to an era of trade and financial protectionism and, possibly, stagnation combined with inflation.”
Source>http://www.marketwatch.com/story/chilling-ways-the-global-economy-echoes-1930s-great-depression-era-2016-02-19
Posted by theodore miraldi at 12:35 PM