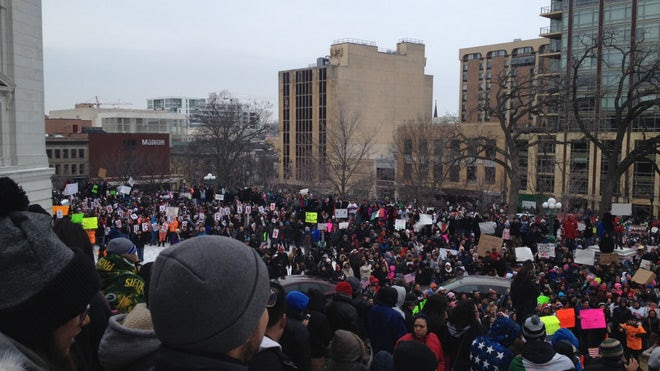 A group of Hispanics in Wisconsin are holding “A day without Latinos” rally in the state’s capital on Thursday to protest two state bills that they claim are “anti-immigrant.”
Groups in the state are urging Latinos to not show up to work and several restaurants have said they would close for the day. Organizers said they want businesses to know what it feels like to have a day without Latinos.
A caravan of buses, vans and cars will converge on the steps of the Madison state capital for the rally to protest the bills. Assembly Bill 450, known as the “sanctuary cities” bill, allows police to investigate people’s immigration status, detain and possibly deport the undocumented.
Senate Bill 533 would block counties statewide from issuing identification cards to people who cannot access state IDs. The ID law has been passed by both legislative chambers but is awaiting the signature of Gov. Scott Walker to become law. The sanctuary cities bill was approved by the state House and now will be considered by the state Senate.
Proponents of the bills say they will make communities safer and would prevent voter fraud. Critics say they promote racial profiling and create fear in the community.
A spokesman for Voces de la Frontera, the local group organizing the rally, told Fox News Latino that the protest’s goal is to push Walker to block the bills.
“We need exactly the opposite bills. We need it to be easier for police to protect people. They’re making people too afraid to report crimes for fear the police has partnered with [Immigration and Customs Enforcement] and could deport them,” Freeman told Fox News Latino.
The rally was organized two weeks ago. “We came to Milwaukee to meet and the decision was made then and there to assemble,” Freeman said.
Protesters traveled from all across the state to attend the rally.
“I feel very proud to be Hispanic. My community has responded quickly,” Mario Ramirez told FNL as he was driving to the rally. “They’re waking up. This is just the beginning. This proves we can mobilize immediately.”
Immigrants account for more than 40 percent of the hired help on dairy farms, according to a University of Wisconsin study. Most of the immigrants are from Mexico. Some have come from other states, such as Arizona, that have passed laws cracking down on undocumented workers, organizers said.
“Today is historic for immigrant workers. They’re using their economic power,” Freeman said.  “People have the power they’re using it.”
Source>http://latino.foxnews.com/latino/news/2016/02/18/wisconsin-holds-day-without-latinos-rally-to-protest-immigration-bills/
Posted by theodore miraldi at 12:17 PM