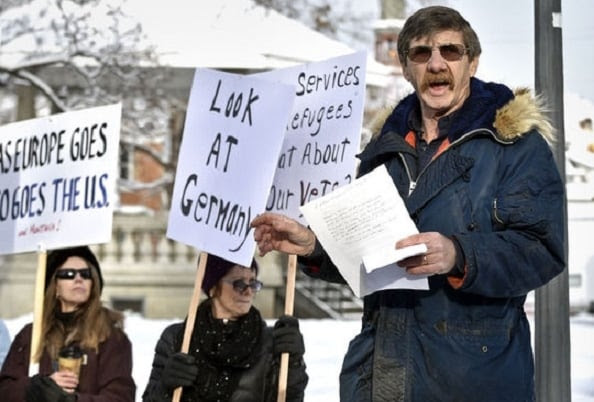 To see more than 500 people at a government meeting usually means one of two things – a major tax hike is on the agenda or something akin to a nuclear waste dump is being proposed.

So what was it that had the townspeople of rural Ravalli County, Montana, so stirred up?
The answer is simple: Syrian refugees.
They don’t want any.
The county held a public hearing Feb. 18 on a proposed letter to be sent to the Obama administration, Montana Gov. Steve Bullock and the state’s congressional delegation making one point abundantly clear – no Syrian refugees will be welcomed in Ravalli County.
The county commissioners voted unanimously to send the letter.
Many people who could not make it to the meeting had called or wrote their commissioners. Commission Chairman Ray Hawk said the content of those calls and letters was 50-to-1 in opposition to allowing refugees to be resettled in Ravalli County, the Missoulian reported.
A few people spoke in favor of welcoming refugees to Ravalli saying they were embarrassed by the tone of the meeting. They were booed and heckled, the newspaper reported.
The pushback was sparked by an announcement recently by two nonprofits – Soft Landing Montana and WorldMontana – that they plan to work with the federal government to bring Syrian refugees to Big Sky Country. The plan is to resettle the Syrians in the Helena area and in Missoula County, a neighboring county to the north of Ravalli County.
As WND reported last month, the Obama administration is increasingly sending Muslim refugees to smaller cities in Middle America.
Wyoming and Montana are the two exceptions. Wyoming is the only state that does not participate in the federal refugee program. Montana has not received any refugees since 2009 and only 61 have been sent there since the Sept. 11, 2001, terrorist attacks, mostly from Belarus.
98 percent of Syrian refugees are Muslim
So when news broke that a plan was afoot to bring Syrian refugees, 98 percent of whom are Sunni Muslim, to the western rancher state, it set off alarm bells for many residents. They held a protest rally on the Missoula County courthouse steps Feb. 8 that attracted 120 people in a blowing snow storm. They have sent op-ed articles to local newspapers questioning the wisdom of the Missoula County Board of Commissioners, which in a letter last month requested that Obama’s State Department send their county “approximately 100 refugee per year.”
It was against that backdrop that Thursday’s public hearing in Ravalli County was held. 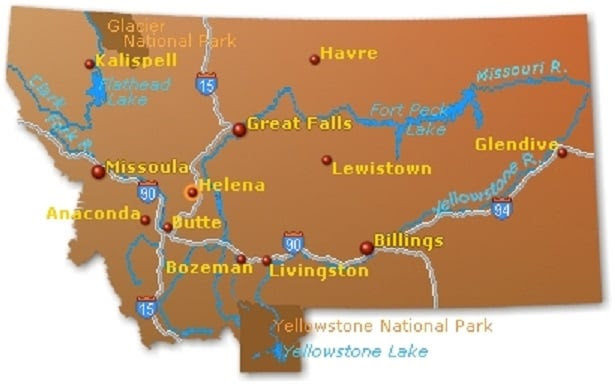 The federal government is working with churches and NGOs to bring foreign refugees, including some from Syria, to the small towns of Helena and Missoula.
Interest was so high that the meeting had been moved three times to accommodate the ever-growing crowd. It was eventually decided to hold the meeting in the gymnasium of a local junior high school.
The crowd erupted in a standing ovation when the unanimous vote came down in favor of sending the letter.
Caroline Solomon, who lives in Flathead County near Kalispell, in northwestern Montana, is a member of the Montana chapter of ACT for America, a group that educates the public about the dangers of creeping Islamic supremacism in Western cultures.
What happened in Ravalli County was huge, she said.
“They did it on their own,” Solomon said. “They did a draft letter, and it’s unbelievable what happened yesterday, they accepted the letter, signed the letter, and they’re sending it in.”
The same trend of people “waking up” is also seen in the growing crowds coming to Act for America meetings, Solomon said.
Paul Nachman, a retired physicist and immigration expert from Bozeman, will speak about refugee resettlement at the next meeting of Act for America on Tuesday.
Montana and Wyoming the last frontier?
“We had to move it to a bigger location. I think people are waking up and realizing that Wyoming and Montana, we’re the only ones still standing (against the refugee influx),” Solomon said.
Neighboring Idaho has become a hotspot for refugees in recent years, taking in nearly 11,000 since the Sept. 11, 2001 terror attacks. Even Alaska has been sent 1,130 refugees, including more than 500 from Muslim countries, over that same period, according to U.S. government data.
Montana Gov. Steve Bullock, a Democrat, has supported President Obama’s plans to bring in 10,000 Syrians and 85,000 refugees from all countries this year, followed by 100,000 in fiscal 2017.
According to a NBC-13 News poll conducted Feb. 18, 93 percent of Montanans who participated said they were against resettling any Syrian refugees in Montana.
And the opposition is only growing as people learn about the refugee program, Solomon told WND.
“It is grassroots. It cannot be more grassroots than those people showing up in Ravalli County and doing their civic duty,” she said. “We will see what happens. We’re not giving up in Montana.”
Those who spoke at the Ravalli County meeting were not in a mood for compromise.
Hollis Poe of Hamilton told the commission he was starting a new group called Advancing Conservatism.
“ISIS will come after our women,” he said, as quoted by the Missoulian. “They are going to find that, in Ravalli County, women pack weapons.”
Phil Liggins, also of Hamilton, said Allah and the God of the Bible were not the same.
“The U.S. may not be at war with Islam, but Islam is at war with the U.S.,” he said.
Commissioner Jeff Burrows said, in the end, the decision came down to economics.
“We heard loud and clear that people were concerned about impacts to the economy and infrastructure,” Burrows said. “From the commissioners’ point of view, this wasn’t about race or religion. This was about impacts to local services and impacts to public health, safety and welfare in Ravalli County.”
‘Pockets of resistance’ forming across U.S.
Ann Corcoran, who has been following refugee resettlement for nine years as a blogger at Refugee Resettlement Watch, said she has never seen so much interest in the issue as she is seeing now.
“Pockets of resistance” are popping up across the country, fueled by news of terror attacks by Muslim refugees in Paris, France, in November and by a husband and wife duo in San Bernardino in December. The wife in the latter attack, Tashfeen Malik, came to the U.S. as an immigrant on a fiancée visa from Saudi Arabia. The visa screening system failed, just as the refugee screening system has allowed dozens of terrorists into the country from Somalia, Iraq, Uzbekistan and Bosnia, Corcoran said.
More than 30 refugees from Somalia alone have left the country since 2007 to fight for overseas terror organizations, the FBI reports.
And FBI Director James Comey said in congressional testimony last October it was impossible to screen the vast majority of Syrian refugees because the U.S. has no access to reliable law enforcement data in that war-torn country.
Meanwhile, Syrians are arriving daily
After the Paris attacks, more than two dozen governors wrote the Obama administration and requested that no Syrians be sent to their states until they can be properly vetted. The administration ignored those requests and the Syrians continue to arrive daily in dozens of U.S. cities and towns.
Just since Nov. 1 of last year, the Obama administration has delivered 721 Syrian refugees to the U.S., according to the federal refugee database.
That boosts to 2,761 the number of Syrians who have been sent to the U.S. since the outbreak of that country’s civil war almost five years ago.
The top 10 states for Syrian refugee arrivals to date are:
Corcoran said citizen backlash does make a difference on where the refugees will be sent by government contractors posing as “charities.”
“The U.S. State Department has repeatedly said it will not send refugees to ‘unwelcoming’ communities,” Corcoran said. “But, it isn’t because of their concern for you, your economy and your culture, it is because they fear for the refugees’ safety.”
That was borne out last September in comments by Larry Bartlett, a State Department official, while speaking in Twin Falls, Idaho. Bartlett said in that meeting that the feds don’t send refugees to places where they could be “unsafe,” which Corcoran described as a “slap in the face” by a cynical government bureaucrat who would insinuate that because a community didn’t want Muslim refugees that they would actually hurt them physically.