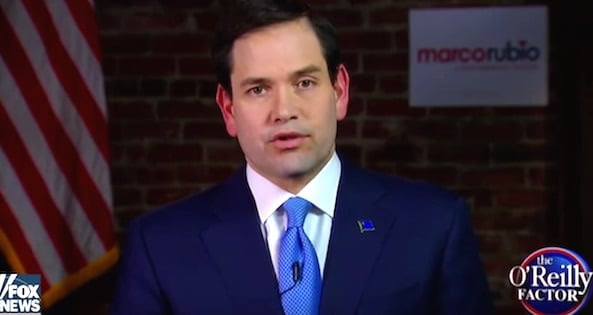 Florida Sen. Marco Rubio found himself flustered and repeating himself in an illegal-immigration showdown with Fox News star Bill O’Reilly.

Conservative blogs used Rubio’s responses to reconstitute the “Marco Roboto” charges leveled after his rough New Hampshire debate on Feb. 6.
“Marco ‘Robot’ Rubio suffered a glitch Monday on ‘The O’Reilly Factor.’ The computer chip repeated himself 8 times,” Gateway Pundit reported Tuesday.
“Marco the red-eared senator squirmed under the direct questioning from Bill O’Reilly, even though Rubio has recited his immigration spiel hundreds of times,” added VDare.
O'Reilly doggedly demanded Rubio explain his ideal vision for dealing with 12 million illegal immigrants living within the United States, but the senator stuck to saying it "depends on what the American people will support."
Rubio said a concrete solution that did not involve deporting millions of illegal immigrants would have to wait until the southern border was secure.
Fox provided the following transcript to media outlets:

O'REILLY: And, we assume anyone who wins the Republican nomination will do that, if they become president. But, I'm interested in your vision, OK? Because your father came here from Cuba, and he came legally because Cubans had the political component going for them after Castro took over in 1959.
Now, your vision, not the American people's vision, your vision. You've got 12 million people living here, Trump says he's going to round them up, use federal authorities, and federal power to force them to go back home. Some people say that's not realistic, some people say that won't happen because courts would block it.
But, your vision is to deal with illegal aliens here who have broken our laws how? What will you try to sell the voters?
RUBIO: Yeah, and first, just to set the record straight, my parents came in 1956 before Castro. They came through the regular green card process. They applied and they entered the country the normal immigration way. They didn't have any sort of special status.
And, then as far as the 12 million that are here? Look, I don't believe the American people support some sort of militaristic round-up of individuals, and I don't think you could carry it out. The sort of tactics it would required would offend the American people.
The good news is that we don't have to do it that way. If you secure our border -- if you secure our border, if you put in place mandatory e-verify, you put in place a mandatory entry exit tracking system, if we prove to the American people that illegal immigration is finally under control, I think the American people will respond in a very rational, reasonable and responsible way...
O'REILLY: But, what is that? Wait.
RUBIO: ... about what do you do with someone that fits certain criteria?
O'REILLY: In your mind ...
RUBIO: Again, I don't -- it depends on what the ...
O'REILLY: OK.
RUBIO: It depends on what the American people are willing to ...
O'REILLY: Alright, but let me give you an example. All right. So, Tommy O'Malley has overstayed his visa from Counting Cork in Ireland.
RUBIO: Alright.
O'REILLY: Let's take it out of the Mexican realm because there are a lot of non-Mexicans who are here illegally, alright? Let's take that emotional component out of it.
So, Tommy O'Malley comes over, he overstays his visa. He's got a job out on Long Island, he's been here, he's got two kids. Do you let him stay, do you give him American citizenship? What do you do with him?
RUBIO: Well, first of all, it depends on what the American people are willing to support because you're not going to ram anything down their throat ...
O'REILLY: Alright, you're not going to give me your vision ...
RUBIO: No, I'm going to give it to you. I'm going to give it to you, Bill.
O'REILLY: OK, go.
RUBIO: Let me finish my statement. It does depend on what the American people will support. Here's what I've suggested in the past. If someone has been here for a defined period of time, they can pass a background check, if they've committed crimes they can't stay. They have to pay a tax, they have to start paying taxes. They're going to have to pay a substantial fine because they violated the law.
And, in exchange for all that, they can apply and receive a work permit, and that's all they're going to be allowed to have. A permit that allows them to work here and travel, and that's it.
O'REILLY: OK.
RUBIO: That's all they'll be allowed to have for a very significant period of time. I think that's something the American people might be open to ...
O'REILLY: They might be ...
RUBIO: But, only after our borders are secure.
O'REILLY: They might be, but it would have to be very well defined to them.