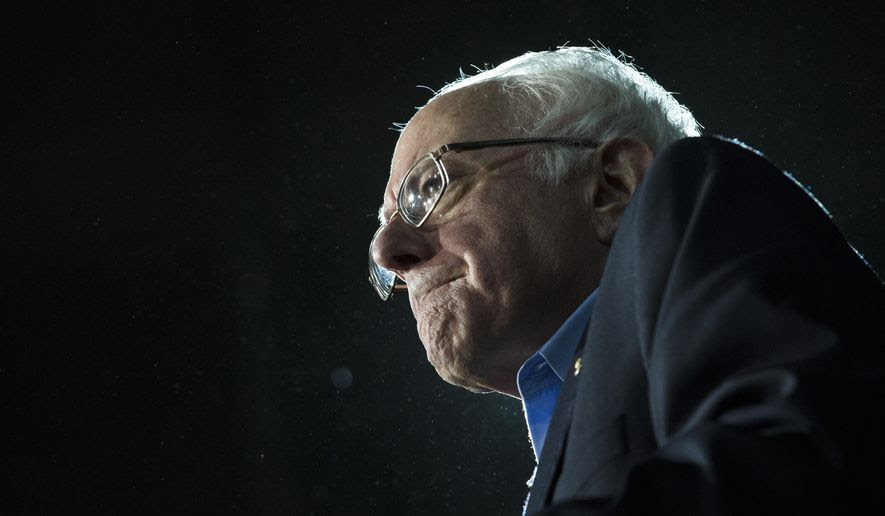 Democratic presidential candidate Sen. Bernie Sanders, I-Vt., grimaces as he delivers his stump speech during a campaign
stop at the University of New Hampshire Whittemore Center Arena, Monday, Feb. 8, 2016, in Durham, N.H. (AP Photo/John Minchillo)
Valerie Richardson
The New Hampshire voter-fraud investigation into Vermont Sen. Bernard Sanders’ campaign has grown with the release of a second undercover video showing out-of-state staffers saying they exploited the law in order to vote in the Democratic presidential primary.
New Hampshire Assistant Attorney General Stephen G. LaBonte said Thursday he had seen both hidden-camera videos released this month by Project Veritas Action, including the latest footage showing top staffers saying they had registered to vote using the campaign office’s address in Manchester, an apparent violation of state law.
Mr. LaBonte launched an investigation last week after the release of the first Project Veritas video, which shows poll workers advising undercover investigators on how to game the system to vote in the Feb. 9 primary.
“I’ve seen the first video. I’ve also seen the second video,” Mr. LaBontetold The Washington Times. “We are looking into it.”
Mr. LaBonte said he was seeking the original footage from Project Veritas Action, the conservative investigative group known for its undercover sting operations.
The second video focuses on Hugo Palma, Mr. Sanders’ regional field director, who says on hidden camera that he had registered using the field office address in order to vote in the New Hampshire primary even though he lives in Colorado Springs.
Other staffers said the practice was commonplace. New Hampshire’s election law says that voters “must be domiciled” in the city or town in which they register and must sign an affidavit when registering agreeing that their domicile is “that place, to which upon temporary absence, a person has the intention of returning.”
In the second video, Mr. Palma made it clear he has no intention of returning to live in New Hampshire, saying, “This place sucks.”
“Why the [expletive] would I want to come back to New Hampshire? This place is a [expletive] show,” he says.
Another staffer said the “higher ups” in the campaign had encouraged them to vote in New Hampshire as long as they didn’t also vote in another state.
“Everyone else in the office is also like claiming domicile here,” said a woman identified as staffer Donna Waterman in an audio recording. “Even though that’s not true. Even though we are not planning on coming back, but it’s super, super easy to register in New Hampshire, because you bring in a piece of mail, and that’s claiming domicile.”
New Hampshire’s lax voting requirements, including same-day voter registration, have spurred any number of voter-fraud complaints, including allegations of “drive-by” voting by non-residents who want to participate in the state’s early presidential primary.
Even so, Democratic Gov. Maggie Hassan vetoed in July a bill that would have required voters to reside in the state for 30 days prior to an election, saying it constituted “unreasonable restrictions” on voting rights.
Mr. LaBonte’s office is still investigating thousands of voter affidavits after postcards sent after the 2012 election to voters who couldn’t prove their addresses when they cast ballots were returned, according to the Concord [N.H.] Patch.
Manchester city clerk Matt Normand told the Union Leader that he had sent documents related to the voter registration of Mr. Palma and Ms. Waterman to the state attorney general’s office after the release of the second video.
When asked by Project Veritas Action President James O’Keefe on camera why he had “committed voter fraud,” Mr. Palma referred questions to the campaign’s communications department.
“We have caught voter fraud on tape, undeniable, no excuse,” Mr. O’Keefe says.
The Sanders campaign did not respond immediately Friday to a request for comment.
Source>http://www.washingtontimes.com/news/2016/feb/19/new-hampshire-voter-fraud-probe-sanders-campaign-e/?page=all#pagebreak
Posted by theodore miraldi at 5:12 PM