Obama to Move Terrorists to Your Backyard 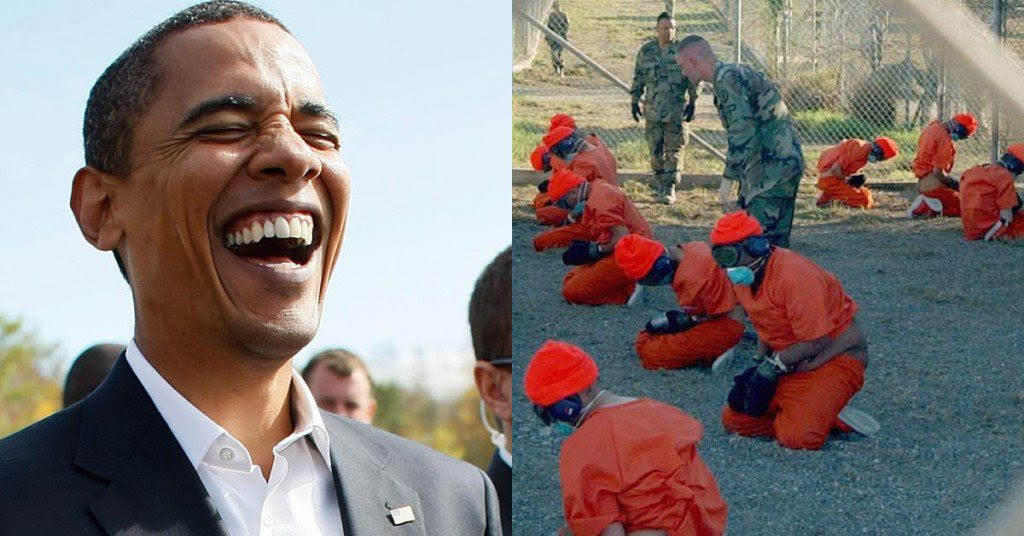 President Obama detailed Tuesday a four-point plan he'll submit to Congress to eventually close the detention facility at Guantanamo, Cuba -- a plan that includes releasing more of the remaining 91 detainees, while transferring others to an as-yet determined facility on U.S. soil.Much of the president's plan, which represents a final effort to fulfill his 2008 campaign pledge to close the facility, still must be approved by Congress, and includes:
-- The “careful” transfer of 35 detainees to overseas countries;
-- Accelerating the review process for the roughly 56 remaining detainees to see whether they’re eligible for transfer;
-- Using “all of the legal tools” available to resolve the cases of detainees in the commission process; and,
-- Work with Congress to select a secure transfer location on U.S. soil.
“We can improve our security, uphold our highest values around the world and save Americans money in the process,” Obama said in introductory remarks meant to frame the four key points.
Guantanamo Bay: A Brief History | Graphiq
The Guantanamo facility, on the U.S. Naval base in Cuba, was opened in January 2002 in the aftermath of the 9/11 attacks to house captured terror suspects.
The plan presented Tuesday was similar to a draft plan the Pentagon recently released.
A new facility would cost as much as $475 million to build.
Obama said closing the facility would be less of a “drain” on U.S. military resources and save taxpayers $85 million annually, and as much as $1.7 billion over 20 years.
He also suggested that the facility has outlived its usefulness and become a dark spot on U.S. foreign policy, considering allies point out some detainees have been held for perhaps as long as 15 years without receiving a verdict in their military commission trials.
Obama also argued that terror groups are using the issue of detention without an expedient trial as a “propaganda tool” to recruit more members.
“This closes a chapter in our history,” Obama said of his plan. “It reflects the lessons of 9/11.”
Any closure plan faces stiff opposition in Congress, which has passed legislation banning any effort to move detainees to the U.S.
Texas GOP Rep. Mac Thornberry, chairman of House Armed Services Committee, declined comment on the latest plan until he finishes his review of it -- but has told Obama what Congress expects such a plan to include.
A committee aide, however, told Fox News on Tuesday that the administration plan is “not compliant."
New Hampshire GOP Sen. Kelly Ayotte said: "While the administration asserts that transferring detainees and closing Guantanamo is in America's national security interests, they refuse to level with the American people regarding the terrorist activities and affiliations of the detainees who remain at Guantanamo."
The administration in recent months submitted a draft plan with 13 new, potential U.S. locations -- seven prison facilities in Colorado, South Carolina and Kansas, and six others on military bases.
Obama didn’t say whether the plan addresses what to do with any top-members of the Islamic State terror groups should they be captured on the battlefield. But he made clear some of the detainees remain a “continuing and significant threat” and must be held somewhere.
According to officials, the administration plan states a U.S. facility would cost $265 million to $305 million to operate each year. The annual operating cost for Guantanamo is $445 million, but the officials said the Cuba detention center will need about $225 million in repairs and construction costs for continued use.
They said a facility will cost $290 million to $475 million to build, depending on the location.
Congress has been demanding the Guantanamo plan for months, and members representing South Carolina, Kansas and Colorado have voiced opposition to housing the detainees in their states.
Those members and others in the GOP-controlled Congress argue that such a facility poses a national security risk, particularly a terror attack -- concerns that Obama brushed aside in Tuesday's opening remarks.
He acknowledged the idea of detainees on U.S. soil “can be scary.” But he argued that terrorists who tried or successfully carried out attacks on Times Square, at the Boston Marathon and on a commercial jet head to Detroit have been convicted in a federal court and are in U.S. prisons.
“Let us go ahead and close this chapter,” Obama said Tuesday, from the White House.
At its peak in 2003, Guantanamo held nearly 680 detainees, and there were about 245 when Obama took office. He has relocated 147 of them.
The Associated Press contributed to this report.
Source>http://www.foxnews.com/politics/2016/02/23/pentagon-to-unveil-plan-to-close-gitmo-transfer-detainees-to-us.html?intcmp=hplnws
Posted by theodore miraldi at 6:06 PM