Rubio is the Amnesty Con Artist

If Anyone is a Con-Artist it was Tea-Party Candidate, Rubio 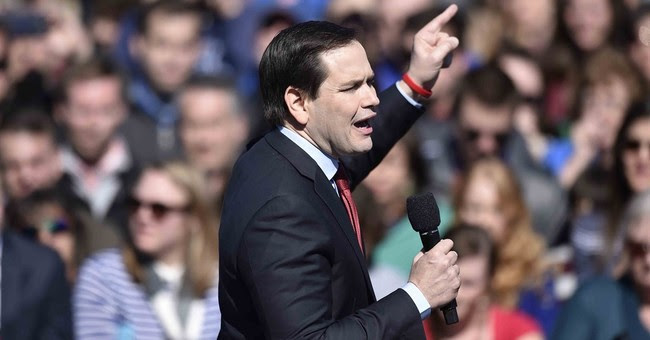 Have you noticed?  Marco Rubio plays every version of himself very well, with the exception of that New Hampshire stumble.
As of late, he’s decided to pretend he’s Donald Trump.  His latest charge is that “we don’t need a con-artist like Trump in the White House.”
Several months ago we started with Nice-Marco.  This is the guy that everyone liked.  He was very uplifting, positive and optimistic about our future.  He told stories about his immigrant parents, his wife and his four children.  We liked him; I think that’s the real Marco.  But, it wasn’t enough to get him past single digits in the polls against 17 candidates.  He started getting desperate.
Next was Politico-Marco.  This was the version that hammered Jeb Bush, slammed Ted Cruz on policy but remained very positive on his message and his direction.  This version showed strength but didn’t get into the fray of the Donald Trump fireworks, so he didn’t get burned.  He rose in the polls.
Then it was Wonko-Marco.  This is the version that combined a little bit of each version but mostly added wonky policy plans for the political geeks who love that stuff.  He added a few points in the polls with this version.  It started to show that he was trying to be all things to all people.
Next, we got Marco-Bot in the New Hampshire primary debate, where he repeated the same answer 5 times in a five to ten minute span to multiple questions.  It was as if his robotic anti-Obama talking point was the only point he had to convey that night.  I can imagine some political hack advising him, “hammer this point home tonight and don’t let up.”
These hacks think you and I are stupid and we believe what people tell us.  The ink from all the research papers for which they immerse themselves is getting to their brains.  We’ve been lied to so much we don’t believe the promises any longer.
All these versions revealed to us that the polished, positive, purposeful Marco Rubio we all admired perhaps wasn’t really Marco at all.  The wizard coming from behind the curtain in the Wizard of Oz, comes to mind.  Re:  Smoke and Mirrors - but not much more.
Next?  Depresso-Rubio.  After the New Hampshire debate-meltdown, we learned how Rubio goes through bouts of anxiety and defeatism, resulting from his own weak performance or failure.  He only rebounds after his ‘handlers’ come to the rescue convincing him, again, how talented he is.  Essentially, when he’s been on a successful run and winning, then gets knocked down, he gets down on himself - almost like a depression.  The people around him have to work hard to get his mind back on track.  And, the cycle continues.
In the Houston debate preceding Super Tuesday, we saw Trumpo-Rubio.  He slammed Donald Trump saying he earned none of his wealth - inheriting it all from his dad, was a con-artist and that Trump repeats the same few phrases over and over instead of discussing policy.  He appeared more like the playground bully attempting to steal Puny-Trump’s lunch money just to show how tough he is.  After a good punch or two, Rubio wore a child-like smirk which said, “I can do this ‘tough-guy’ stunt like Trump.  Wow, I’m really good.”
Analyzing his debate performance academically, Rubio won by a mile.  But if I acknowledge the many versions of Marco Rubio we have seen, it seemed contrite, out of character and childish.
What’s most scary is how well he can play all these roles with only a rare slip in the character he’s portraying.  Clearly he’s overwhelmingly rehearsed, scripted more than the nightly-network news and great at acting.  I wonder how much Adderall it takes to pull off all those uniquely different performances so brilliantly and speak his words so eloquently?
Beware, when Marco Rubio is gaining momentum, he actually seems to choke.  However, when his back is against the wall he seems to find his way and make progress.
Now, we have #MarcoMentum.  That’s The Rubio Campaign’s words, not mine.  So Marco Rubio is now going ‘fake it until [he] makes it” and act like the front runner.  I’m willing to bet he can have a brilliant performance and fool many of the media hacks into believing it, who are more clouded by their hatred of Trump than a pursuit of the truth.
In order to be the winner (business, family, life or politics), you have to be yourself, first and foremost.  You have to be unique.  And you have to reject the conventional wisdom peddled by the overpriced consultants who either never made it themselves or are a career ‘has-been.’
Well, you don’t have to do that.  You can always settle for second-best, third, even fourth place.  But, winners find the best version of themselves, run with it and win.  They take advice from everyone, but they never become someone they are not.  They know that being over scripted limits their ability have lasting greatness and success.
The voters will likely see through these many versions of Rubio.  Having called yourself a "Tea Party" candidate then supporting amnesty is the definition of a con artist, Mr. Rubio.  So, you were much more likable until you threw stones in your glass house.
In all seriousness, Marco Rubio is an incredible talent and likable person.  He’s just young and naive.  Someday, he’ll make a great President.  But, I think he’s being led astray by his advisors and handlers who are desperate for a win.
As I was told early in my career, “get some experience on a smaller level and then you might be ready for this job.  You’re just not ready now.”   Rubio should run for Governor of Florida..  He’s ready for that.  Just not the White House.
Source>http://townhall.com/columnists/bryancrabtree/2016/02/28/if-anyone-is-a-conartist-it-was-teaparty-candidate-rubio-turned-amnesty-n2125970/page/full
Posted by theodore miraldi at 10:19 AM