In final show before Super Tuesday, the senators are poised to unleash a nasty assault and emerge the anti-Trump. 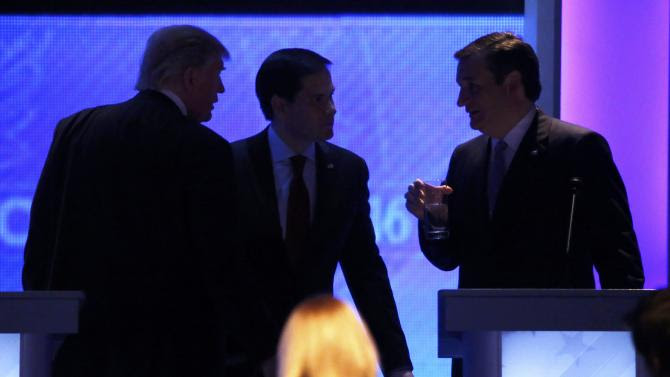 
HOUSTON — For Marco Rubio and Ted Cruz, this might be their last, best chance.
The final Republican presidential debate Thursday night before the Super Tuesday contests has the potential to be an epic display of anger and rhetorical aggression, with Rubio and Cruz going after each other on everything from policy to character as each struggles to emerge as the single alternative to Donald Trump.
Story Continued Below
At this critical juncture in the race, with Trump on a three-state win streak and Republican operatives questioning whether time is running out to stop the New York billionaire, tonight’s fireworks-filled forum will provide a window into the contenders’ end-game strategies.
Here’s what POLITICO is watching in Thursday’s GOP debate.

Rubio has yet to aggressively engage Trump — and those briefed on his strategy say he’s unlikely to do so on Thursday night.
The Florida senator has concluded that going after Trump would accomplish little because the businessman’s supporters are deeply committed and unlikely to swing Rubio’s way. Inciting a confrontation with Trump onstage would create drama but wouldn’t help the senator gain voters, something he badly needs as he looks for his first primary win.
Instead, Rubio’s team has decided his best bet is to focus fire on Cruz. They think the Texas senator’s voters are less locked in and could swing Rubio’s way should Cruz fade. The only way to dislodge Trump, Rubio’s advisers say, is to turn it into a two-man race — meaning that they first need to get Cruz out of the way.
Of course, if Trump chooses to engage Rubio — something he hasn’t yet done in a debate — Rubio will have to respond. And while Rubio may not directly take on Trump, he may do so implicitly.

Rubio will also be playing to the more mainstream, establishment Republican donors and supporters, arguing as he has shown in recent days that he is the only candidate who can unite the party and win the general election.

It’s a line that appeals to the profoundly worried Republican Party hierarchy that Rubio is aggressively courting. Last week, Karl Rove delivered a presentation during a gathering of the Republican Governors Association at the posh Fairmont Hotel in Washington and warned that Trump would hurt the GOP’s prospects in the race for the White House and in down-ballot contests for House, Senate and governor. The speech, according to two sources present, was attended by a number of Republican governors, including Rick Scott of Florida, Pat McCrory of North Carolina and Phil Bryant of Mississippi.

For Cruz, the stakes couldn’t be higher.
After winning the Iowa caucuses, the senator has suffered three consecutive third-place finishes. And after spending a year courting the religious vote, Cruz has seen his pristine image blemished by charges — directed at him by Trump and Rubio — that his campaign plays too rough.

On Thursday evening, Priority No. One will be to push back.
“He’s got to beat back the narrative that he and his campaign are masters of the dirty trick,” said Brett O’Donnell, a longtime Republican debate coach who advised Lindsey Graham.

The debate precedes a slate of Southern Super Tuesday primaries that has been Cruz’s focus — and from which, without a good showing, it may be hard for him to recover. That means that during the debate he’ll reinforce his pitch that he is a conservative-minded Southerner whom voters in states like Tennessee, Oklahoma and Arkansas can relate to. He’ll also be tailoring his message for his home state of Texas, which also votes on March 1 — and where anything short of a victory would be devastating.

“The fact that Texas is a must-win for Cruz makes me suspect a lot of his strategy will be aimed at fortifying his position there by really demonstrating knowledge and key issues for Texas voters,” said Phil Musser, a former Republican Governors Association executive director. “Home state appeal — and a win — is a must.”

In the lead-up to Super Tuesday, Cruz is seeking other ways to reinforce his Southern credentials. In recent weeks, he has been aggressively appealing to Rand Paul for an endorsement. Yet three sources close to the Kentucky senator said Paul had rebuffed Cruz, saying that he had no intention of endorsing anyone anytime soon. A Cruz spokesperson declined to comment.

On the debate stage, Trump has been everything you’d expect him to be — loud, swaggering and always on the attack.

Yet in Houston, some wonder whether he might take a more low-key approach.
While Trump’s style has enabled him to win the backing of a wide swath of primary voters, he has yet to secure a majority of the vote in any nominating contest — a circumstance that has led some to wonder whether the real estate developer’s support among voters has a ceiling. Should the field be winnowed into a two-person race, he might be vulnerable to a rival who is capable of uniting the rest of the primary electorate behind him.
To expand his support, Trump may need to adjust his style — and appear more traditionally presidential.

“He’s got a tightrope to walk,” O’Donnell said. “He’s got to show that he can fortify his voters and bring others behind him.”

Then again, Trump has proved himself to be an unpredictable figure, one who throws caution and restraint to the wind. In recent days, the mogul has intensified his criticism of Cruz, calling him a “liar” and “sick.”

“I suspect he just continues rolling along per usual. Why change what’s working?” Musser said. “I don’t expect too much deviation from the norm.”
If Trump does choose to keep up his attacks, he’ll likely have an ally in the cause: Rubio.
In the final days leading up to the South Carolina primary, Trump and Rubio were something of a duo. The two echoed their attacks on Cruz, branding him a dishonest pol who didn’t play by the rules. It worked.

The greatest uncertainty surrounds John Kasich, who has stubbornly remained in the race despite mounting pressure from Republican establishment figures who want him to exit.
The Ohio governor, who has tapped longtime adviser Bob Klaffky to lead his debate prep, has mostly been a low-profile figure onstage. He rarely interjects during skirmishes, and even when attacked he doesn’t typically respond in kind.
But with questions about his viability growing, Kasich needs to stand out — and some wonder whether he’ll go after his mainstream GOP rival, Rubio.

Over the past several days, the Kasich campaign — which has made a point of not targeting its rivals — has turned up the heat on the senator. On Tuesday and Wednesday, it released a pair of memos, both of which branded Rubio as a Beltway insider. And Kasich’s chief strategist, John Weaver, has launched into a Twitter tear against Rubio labeling the senator “slick and pretty.”

To some, the offensive highlights the urgency confronting Kasich.
“He’s got to own the establishment lane better than Rubio does,” O’Donnell said.
Kasich won't be the only low-key candidate on stage. Ben Carson has pledged to continue fighting, despite being blown out in the first four contests. Like Kasich, the retired neurosurgeon is under pressure to make something happen in Houston. A disappointing performance on Super Tuesday, some believe, will spell the end of the road.