Targeted gun-free zone: 'It would make the news' 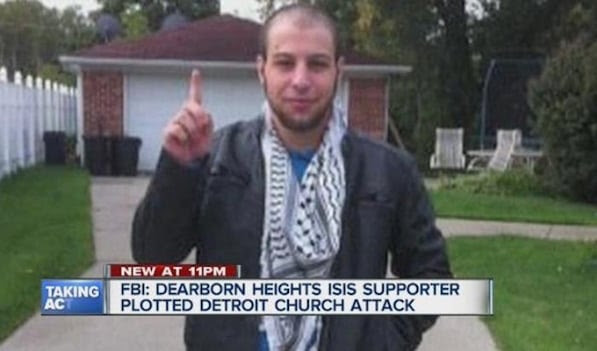 Khalil Abu-Rayyan is a 21-year-old Dearborn Heights, Michigan, man who gets excited by thoughts of beheading Americans, burning people alive and throwing homosexuals off of tall buildings.

Beyond these fantasies, he’d actually made plans to shoot up a church full of Christians in Detroit, according to court records documenting his Internet conversations with an undercover FBI agent.
According to affidavits filed in U.S. District Court in Detroit, he told the FBI he had already picked out a church for his bloody rampage. It was located less than a half-mile from his place of employment. He chose this church because it was large – up to 6,000 members – and he knew it would be an easy target.
“A lot of people go there. Plus people are not allowed to carry guns in church,” the FBI affidavit quotes him as saying. “Plus it would make the news. Everybody would’ve heard. Honestly I regret not doing it. (If I) can’t go do jihad at the Middle East, I would do my jihad over here.”
Would you be prepared to defend yourself and other innocents in a surprise attack? Find out what one courageous churchgoer did to protect others in the DVD: “Shooting Back: The Right and Duty of Self-Defense”
Assistant U.S. Attorney Ron Waterstreet testified before a federal magistrate on Feb. 16 that Abu-Rayyan told an undercover agent he was “hearing voices” that told him to “burn people alive,” the Detroit News reported. He also told the agent that “shooting and death make me excited. I love to hear people begging and screaming. … I wish I had my gun.”
“His dream was beheading someone,” Waterstreet said. “This is not a person the court should take a risk (with).”
Despite the fact that Abu-Rayyan has not been charged with any terrorist-related crimes, the magistrate ruled after hearing the FBI testimony that he was too much of a threat to public safety and ordered him held without bail.
The FBI claims Abu-Rayyan has since late 2014 used Twitter for “retweeting, liking and commenting” on Islamic State propaganda. Among his posts were “video of a Jordanian fighter pilot being burned alive, men being thrown from a high-rise building to execute them, the beheading of Christians in Egypt and news of ISIL victories,” the Detroit News reported.
Abu-Rayyan has not been charged with any terrorism activity to date, only with possession of a weapon while under the influence of illegal drugs.
He faces up to 10 years in a federal prison if convicted of that charge.
CAIR defends alleged ISIS supporter
The Council on American-Islamic Relations defended Abu-Rayyan as likely just "showing off."
CAIR spokesman Dawud Walid said Abu-Rayyan "seemed just to be a troubled young man that got off (on) the wrong track," he told Fox2 Detroit. The suspect's dad told CAIR his son was on "dope" but was not a threat to pull off an ISIS-inspired attack.
Since Abu-Rayyan has not been charged with terrorist acts, his Internet communications should not have even been brought up at his court hearing, Walid said.
"My issue is if this had nothing to do with the charges that's being leveled against him, then why bring it up? All it does is just further promote fear in our community," Walid said.
CAIR has itself been the subject of terrorist investigations and was an unindicted co-conspirator in the Holy Land Foundation terror-financing trial of 2007-08 in Dallas, Texas.
Review WND's "Rogue's Gallery" of terror-tied CAIR officials in which more than a dozen men affiliated with the organization have been investigated or convicted of supporting terrorist activity.
Records unsealed Feb. 4 in U.S. District Court showed the FBI has been monitoring Abu-Rayyan since May. He had been making "increasingly violent threats" to others about "committing acts of terror and martyrdom — including brutal acts against police officers, churchgoers and others — on behalf of the foreign terrorist organization Islamic State of Iraq and Levant."
'I tried to shoot up a church'
Beside tweeting his support for ISIS, Abu-Rayyan allegedly told an undercover agent during Internet conversations about a plot to target one of Detroit's biggest churches. The church has not been identified, but the suspect's plans were thwarted by his father, according to the FBI.
"I tried to shoot up a church one day," Abu-Rayyan is quoted as saying in court records. "I don’t know the name of it, but it’s close to my job. It’s one of the biggest ones in Detroit. Ya, I had it planned out. I bought a bunch of bullets. I practiced a lot with it. I practiced reloading and unloading. But my dad searched my car one day, and he found everything. He found the gun and the bullets and a mask I was going to wear."
The father, Rayyan Abo-Rayyan, later denied finding guns and bullets in his son's car.
In social-media conversations with the undercover agent that took place over several weeks in December, "Abu-Rayyan consistently expressed support for ISIL and repeatedly expressed his desire to commit a martyrdom operation," according to the affidavit.
He told the undercover FBI source about carrying a "large knife or sword in his car” in case of a fight and said "it is my dream to behead someone," according to the court documents.
No concealed guns allowed in Michigan churches
Alan Gottlieb, executive vice president of the Second Amendment Foundation, said mass killers aren't stupid. They hit the softest target available.
"This is another example of violent people or terrorists planning attacks on unarmed people in so-called gun-free zones," Gottlieb told WND. "The time has come for the gun-control crowd to admit that gun prohibition only empowers evil and makes all of us vulnerable."
And Michigan law does not permit gun owners to carry concealed in churches, noted Larry Pratt of Gun Owners of America. 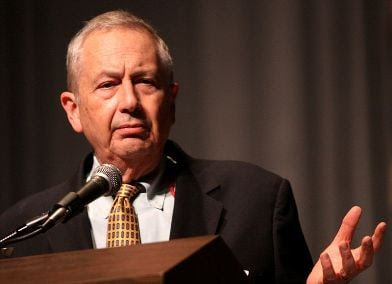 Larry Pratt, executive director of Gun Owners of America.
"One of the flaws in Michigan's concealed carry law is a prohibition of concealed carry in churches even though open carry is permitted," Pratt told WND. "Hopefully the legislature will realize that all but two of the mass murders perpetrated in public since 1950 have taken place in gun-free zones. Concealed carry bans are an invitation to terrorists to strike. The invitation needs to be withdrawn."
Practice makes perfect
Abu-Rayyan had reportedly acquired an AK-47 with a 40-round magazine and had been practicing firing and reloading the weapon at a local firing range.
The affidavit says Abu-Rayyan told the undercover agent the first gun he bought in October wasn’t good enough "because it only held six shots and he would have to keep reloading."
The next month, he "tweeted photos of himself firing an AK-47 type and AR-15 type rifles at a local firing range."
On Oct. 7, Detroit police pulled him over for speeding; inside the 2001 Buick Century, officers found marijuana. Arrested for toting the drug and carrying a concealed weapon, Abu-Rayyan was later released on bond.
On Nov. 15, the same day the pending case denied him the chance to buy another pistol, Abu-Rayyan rented a firearm at the firing range pictured on Twitter later that month, according to the affidavit.
Soon after he pleaded guilty to the speeding charge, Abu-Rayyan told the undercover agent he "wanted to kill the officer who arrested him."
Court documents revealed that because the officer's heart attack delayed a trial, Abu-Rayyan "wanted to do a martyrdom operation at the hospital, killing the police officer in the process."
Jerry Henry, executive director of GeorgiaCarry.org, told WND it's not surprising a suspected terrorist would target a gun-free zone.
"His intentions are no different than that of others who prey on school children, movie goers and all other unarmed citizens in gun-free zones or victim enrichment zones," Henry said. "His goal, as others in victim enrichment zones, is to kill as many people possible in as short amount of time as possibly. Unfortunately, there are no laws that will stop this type of murderer."
Henry said progressives stand ready to pounce on stories about "gun violence" when the only way to prevent these tragedies is to have law-abiding citizens with concealed-carry permits who are ready to counter terrorists and madmen.
"The truth of the matter is, until there are steps taken to remove these victim enrichment zones, murders of unarmed citizens will continue in numbers only acceptable to the gun-control adherents," he said.