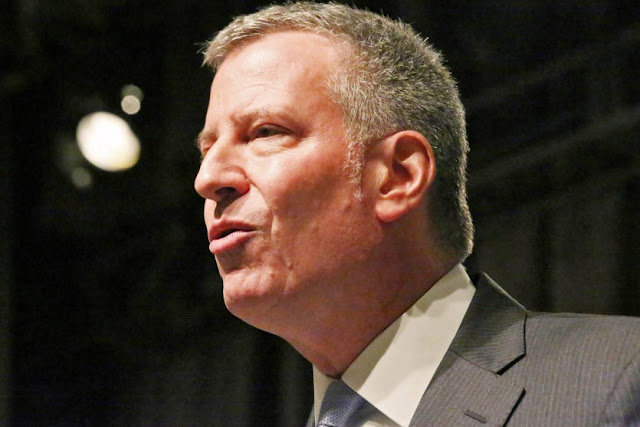 Besieged by federal and state investigators, Mayor de Blasio turned Nixonian Thursday and declared five of his closest outside confidants exempt from public-disclosure laws when they advise him on running the city.
His administration extended the stunning “agents of the city” privilege to BerlinRosen co-founder Jonathan Rosen; Hilltop Public Solutions partners Nicholas Baldick and Bill Hyers; and AKPD partner John Del Cecato.
All four worked on de Blasio’s political campaigns.
Also included was Patrick Gaspard, US ambassador to South Africa and a former political operative at SEIU Local 1199.
BerlinRosen, AKPD and Hilltop were collectively paid nearly $2 million for work on the mayor’s Campaign for One New York, a privately funded non-profit cheerleading outfit that’s under investigation by the US Attorney and Manhattan District Attorney’s offices.

They also worked on the mayor’s fund-raising efforts on behalf of state Senate Democrats in late 2014. That, too, is being probed.
“Their communications to the Mayor’s Office, along with those of their support staff working at the principal’s direction on those particular matters, are exempt from disclosure when related solely to city business and not on behalf of any client,” said de Blasio counsel Maya Wiley.
Hilltop and BerlinRosen communications with the mayor on behalf of their clients are subject to public disclosure, officials added.
None of the five advisers has been paid by the city.
The list of exemptions was announced after the administration rejected Freedom of Information requests for the mayor’s e-mail exchanges with Rosen on the grounds that he was an “agent of the city.”

‘[If the mayor] really has nothing to hide as he says, just lay it all out for everyone to see.’
- City Councilmember Mark Treyger

Elected officials and advocates condemned the mayor’s move.
“[If the mayor] really has nothing to hide as he says, just lay it all out for everyone to see,” said City Councilmember Mark Treyger (D-Brooklyn).
Robert Freeman, director of the state Committee on Open Government, questioned the city’s legal analysis, given that e-mails between the government and private citizens are almost always subject to disclosure.
“Anyone whose advice is sought could be characterized as an agent or a consultant, and the communication could be withheld,” he said. “I believe that it is an unjustifiable stretch that is inconsistent with the law.”
Source>http://nypost.com/2016/05/19/de-blasio-shields-cronies-in-corruption-coverup/
Posted by theodore miraldi at 8:20 AM