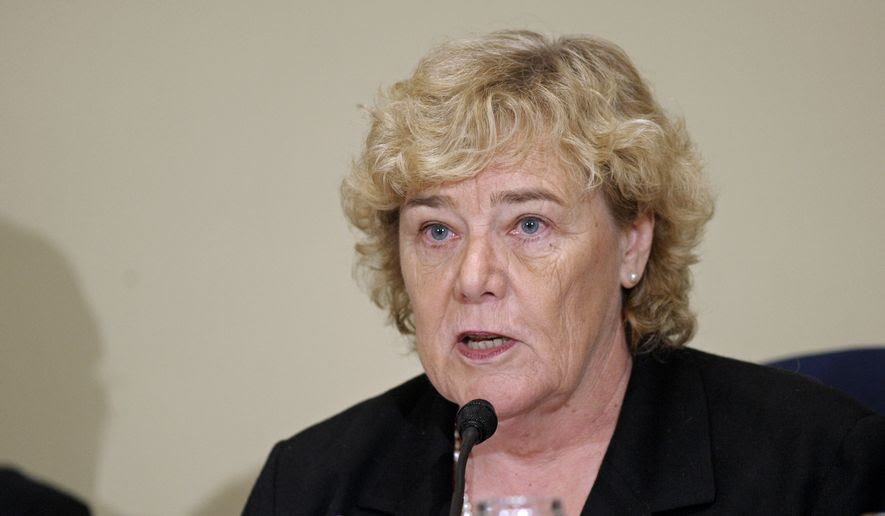 
The National Association of Scholars is hitting back against Rep. Zoe Lofgren, California Democrat, for calling a law professor a “bigot” during a Title IX congressional hearing for making an argument about what reality is.
Peter Wood, president of the National Association of Scholars, for which University of San Diego law professor Gail Heriot is a board member, said Ms. Lofgren’s “outburst” was unbecoming of “the standards of civility of the U.S. House of Representatives.”
The purpose of the U.S. House Taskforce on Executive Overreach hearing last week was to examine whether the Department of Education’s Office of Civil Rights overstepped its authority by requiring schools under Title IX to allow restroom and locker room access on the basis of gender identity rather than biological sex.
“In no way did Professor Heriot present ‘bigoted’ statements on sexual identity,” Mr. Wood said in a press release. “Rather, she gave a history of the OCR’s past disregard for legal limits to its authority and traced the history of the law regarding transgender individuals. She also noted that the concept of ‘transgender’ did not enter the legal vocabulary until many years after the passage of Title IX, which OCR claims as the basis for its ‘Dear Colleague’ letters.”
During the hearing, Ms. Heriot questioned the logical coherence of transgenderism, saying that “male” and “female” are given facts, and that she can no more identify as a Russian princess than a man can identify as a woman, or vice versa.
“If I believe that I am a Russian princess, that doesn’t make me a Russian princess, even if my friends and acquaintances are willing to indulge my fantasy,” she said. “Nor am I a great horned owl, just because, as I have been told, I happen to share some personality traits with those feathered creatures.”
Ms. Lofgren described the remark as “rather offensive.”
“I think you’re a bigot, lady,” she said. “I think you are an ignorant bigot. I think you are an ignorant bigot and anti-gay.”
After chairman Rep. Steve King called the hearing to order, and insisted that Ms. Lofgren refrain from “calling names,” the congresswoman persisted that she would “not allow that kind of bigotry to go into the record unchallenged.”
“Does that mean you think I am a Russian princess?” Ms. Heriot asked the congresswoman.
“I have no idea,” Ms. Lofgren said.
Mr. Wood said he did not anticipate an apology from the congresswoman’s office over the heated exchange.
“It is perhaps too much to hope that Rep. Lofgren will apologize for her antics as they seem to have served her purpose of exciting her progressive base,” Mr. Wood said. “Other observers will take note of her abuse of her authority.”
Ms. Heriot’s criticism of transgenderism recalls other notable figures who have denied the ability of the will to alter reality, whether one’s biological sex or species.
Sen. Ted Cruz of Texas notably attacked then-primary rival Donald Trump last month for his neutral stance on the issue of transgender bathroom access, saying if the businessman were to dress up as Democratic primary front-runner Hillary Clinton, it would not make him a woman.
“If Donald Trump dresses up as Hillary Clinton, he still can’t use the little girls’ restroom,” Mr. Cruz said. “And I apologize for putting that image in your mind.”
And Fox News contributor Tammy Bruce compared the notion that one’s biological sex depends on subjective self-identification to children who often pretend to be animals.
“You know, look, at a point when I was a child, I thought I was a cocker spaniel,” Ms. Bruce, a lesbian feminist who also writes a column for The Washington Times, said on “Fox & Friends” last year. “There’s a point when we have these fantasies where we think we’re Superman, where we can fly, where we’re the cat. This is childhood.”
Source>http://www.washingtontimes.com/news/2016/may/30/zoe-lofgren-california-democrat-draws-flack-for-ca/?page=all#pagebreak
Posted by theodore miraldi at 2:58 PM