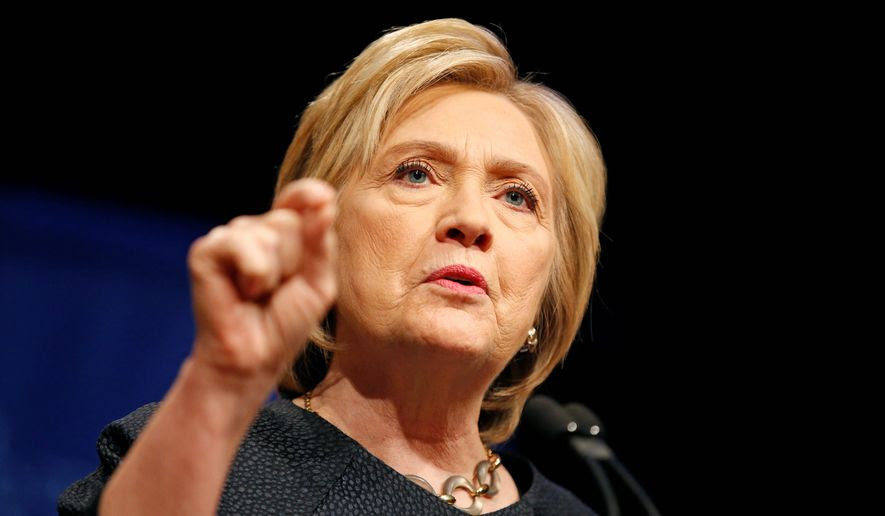 Democratic presidential candidate Hillary Clinton has refused to talk with the inspector general investigating her email system, although secretaries of state who preceded her cooperated with the probe. (Associated Press)

It wasn’t just Hillary Clinton who refused to talk to State Department investigators — her entire top tier of staffers shunned the inspector general’s probe into her secret email system.

And most of those staffers are now playing prominent roles in Mrs. Clinton’s presidential campaign.
The State Department inspector general’s report determined that not only Mrs. Clinton but also her confidantes used private email accounts, aided Mrs. Clinton’s use of a personal server and would not answer any questions about the scandal, fueling speculation of a coordinated cover-up.
“It’s remarkable, truly remarkable, there was no cooperation with the office of the inspector general. I can’t think of anything comparable,” said Tom Fitton, president of the watchdog group Judicial Watch, which has filed more than a dozen lawsuits trying to pry loose emails from Mrs. Clinton and her aides.
Mrs. Clinton’s refusal to talk stood in stark contrast to other secretaries, who all cooperated with the inspector general’s probe.
Mrs. Clinton’s campaign didn’t respond to a request for comment from The Washington Times for this article, but her campaign spokesman said Wednesday in a round of television interviews that the candidate and her inner circle figured it was more important to talk to the FBI, which is also conducting an investigation, than to work with the inspector general.
“To our mind, it made sense to prioritize the review being conducted by the Justice Department,” Brian Fallon told CNN. He did not explain why Mrs. Clinton and her team couldn’t do both.
The inspector general’s 83-page document details the extent to which Mrs. Clinton’s inner circle was aware of her private email server and how some of them used their own private accounts.
The report also casts doubt on claims by John Bentel, the State Department’s former director of information resources management, who told Congress this year that he didn’t know about Mrs. Clinton’s unique email arrangement.
The report includes an exchange in which Mr. Bentel suggested that Mrs. Clinton could use an official state.gov email account already set up for her but warned that would mean her communications would be subject to open-records laws.
In another instance, after State Department employees raised concerns about Mrs. Clinton’s private email server, Mr. Bentel responded by instructing the staff “never to speak of the Secretary’s personal email system again,” the report says.
Mr. Bentel refused to cooperate with the investigation, the inspector general said.
Sen. Chuck Grassley, Iowa Republican and chairman of the Judiciary Committee, which has oversight of open-records laws, said Mr. Bentel will have to answer for the discrepancy between his own recollections and the claims of his employees that he tried to silence them.
“Although Mr. Bentel has been given the opportunity to provide his side of the story, he has refused to cooperate. But, if what these two witnesses said is true, it is an outrage, and it raises lots of serious questions,” Mr. Grassley said on the Senate floor Thursday. “Good and honest employees just trying to do their job were told to shut up and sit down.”
Mr. Bentel’s Washington-based attorney, Randy Turk, would not comment Thursday, but Mr. Fallon, the Clinton campaign spokesman, told CNN that Mr. Bentel was a career State Departmentofficial unconnected to Mrs. Clinton’s inner circle.
“It was unknown to us that any such instructions were given,” Mr. Fallon said. “We’re unaware what the basis of that is.”
Other aides identified by the inspector general are major Clinton campaign players: Huma Abedin, longtime Clinton aide and former deputy chief of staff at the State Department who now serves as the campaign’s vice chairwoman, and Jake Sullivan, former deputy chief of staff at the State Department and currently a senior adviser to Clinton campaign. Cheryl Mills, a former Clintonchief of staff who has no formal role with the campaign but remains a close ally of Mrs. Clinton, also would not meet with investigators.
Even though they refused to talk to the inspector general, most of those aides will be deposed in one of Judicial Watch’s open-records lawsuits.
Ms. Mills is due to be deposed Friday, though her attorneys were able to bar the release of videotapes of the proceeding, claiming such footage would be used in negative political ads against Mrs. Clinton. The judge said the release of a transcript is sufficient.
Judicial Watch has asked one judge to order Mrs. Clinton to sit for a deposition, but no ruling has been issued.
Mrs. Clinton set up her email system at her home in New York and used her own BlackBerry to access her personal account. She rejected use of the state.gov account that had been set up for her, saying it was too inconvenient.
The unique arrangement meant her messages were improperly shielded from open records requests for nearly six years. After prodding by the congressional committee investigating the fatal 2012 terrorist attack in Benghazi, Libya, she returned some 30,000 to the department in December 2014 — nearly two years after she left office. She didn’t release about 30,000 messages that she deemed personal.
She said she turned over all of the work-related messages in her possession, but the inspector general’s report refers to at least three messages that are not part of the set she turned over, The Associated Press reported Thursday.
Despite all of the questions raised by the inspector general’s report, some Clinton supporters argue there is little need to cooperate with either the State Department or congressional inquiries.
“As far as I am concerned, the fact that they are going to talk to the FBI is all that really matters,” said Clinton supporter Jim Manley, director of the communications practice at QGA Public Affairs and former spokesman for Senate Minority Leader Harry Reid, Nevada Democrat.
Source>http://www.washingtontimes.com/news/2016/may/26/hillary-clintons-inner-circle-refused-to-cooperate/?page=all#pagebreak
Posted by theodore miraldi at 6:48 AM