How Donald Trump is drawing in Democrats 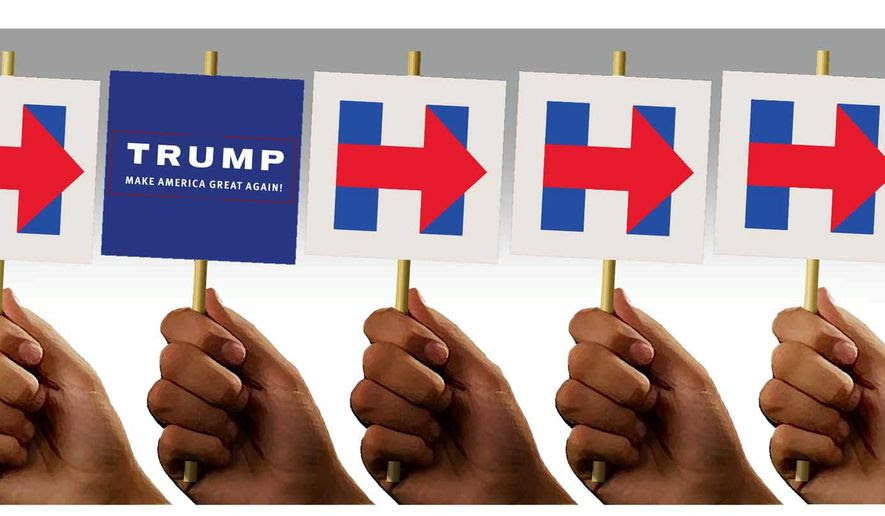 Monica Crowley
ANALYSIS/OPINION:
This election year, major cross-currents are moving within both political parties and across party lines. And no one yet has a handle on how they are reshaping the race.
What we do know is that the usual rules no longer apply, having been blown out by unconventional candidates like presumptive Republican nominee Donald Trump, the weakest economic “recovery” on record, changing demographics and a populist revolt aimed directly at the bipartisan ruling class.
In this environment, anything can — and likely will — happen, including blocs of constituencies voting in entirely unexpected ways.
Van Jones, former Marxist revolutionary and “green energy czar” for President Obama and current CNN contributor, recently offered a five-alarm warning to his fellow Democrats about Mr. Trump: Given his masterful use of social media, his savvy understanding of reality television and his ability to appeal to African-American voters, Mr. Trump could win the Big Prize in November.
In a recent Facebook video, Mr. Jones compared Mr. Trump’s ability to adapt to new media in the same way Franklin Roosevelt, John Kennedy, Ronald Reagan and Barack Obama mastered the new media of their ages. “Just like FDR changed the rules of the game because he mastered radio, he was able to take radio and just completely master that — then you had JFK and JFK was able to master television — new medium, new master, new president,” he said.
Mr. Jones also noted that Mr. Trump has been able to speak persuasively to parts of the Democratic Party, particularly black voters. “Seventy percent of African Americans have a horrible view of Donald Trump,” he said. “In order for the Democrats to win the White House they don’t have to get 50 percent of the black vote or 60 or 70 or 80 or 90. Democrats, in order to win historically, need 90 to 92 percent of the black vote.”
As Mr. Jones put it, if only 70 percent are against Mr. Trump, “that means 30 percent are open to his argument. If he gets half of those, he’s president.”
Recent Public Policy Polling data suggests Mr. Jones could be correct that Mr. Trump is winning over at least part of the black vote. In Ohio, for example, Mr. Trump is earning 15 percent of the black vote against probable Democratic nominee Hillary Clinton, with another 11 percent undecided. In 2012, GOP nominee Mitt Romney won just 4 percent of the black vote there. If Mr. Trump were to score 15 percent in Ohio, he’d win the state and likely the presidency.
Does Mr. Jones believe his argument that Mr. Trump can make serious inroads with black voters — or is he just trying to motivate them and other reliably Democratic voters?
The answer is likely both: Mr. Jones is trying to motivate black voters because he believes it’s true.
Mr. Trump isn’t going to win over huge numbers of black voters, but given his unconventional candidacy, he may attract enough black voters to win. Throughout the primaries, he has demonstrated substantial crossover appeal to Democrats, many of whom crossed party lines to vote for him (over 100,000 in Pennsylvania alone).
Further, Mr. Trump has centered his campaign on three issues that directly affect their livelihoods: a poor jobs outlook, illegal immigration and trade deals that have put American workers at significant disadvantages. Black unemployment remains the highest — at 9 percent — of any demographic. While the wages of white workers have remained flat and those of Hispanic workers have gone up, black workers’ wages have gone down under Mr. Obama. And black youth unemployment remains sky-high at more than 25 percent. Given that the black community has suffered disproportionately in the Obama economy, some black voters may be receptive to Mr. Trump’s economic message
Along with black celebrities such as Mike Tyson, Dennis Rodman and Terrell Owens, the controversial rapper Azealia Banks recently announced her support for Mr. Trump, tweeting, “Trump just wants the U.S. to be lavish … for all of us. I can [bleep] with that.”
As for Mrs. Clinton, Ms. Banks tweeted, “Hillary talks to black people as if we’re children or pets.” She also pointed out that blacks have been voting Democrat for decades and “we don’t have [bleep] to show for it.”
It remains to be seen how representative Ms. Banks may be of thinking in the wider black community. But the sentiments she expressed might be shared enough among black voters to cause professional Democrats like Mr. Jones deep concern.
Turnout will also be key. In 2008 and 2012, Mr. Obama inspired black voters in numbers Mrs. Clinton is unlikely to match. Coupled with widespread Clinton fatigue and her sky-high unfavorable numbers, a lower black (and overall Democrat) turnout scenario would prove disastrous.
Mr. Trump doesn’t need to win the black vote. He just needs to peel enough Democrats away. With even a relatively small shift, he will win. That’s a cross-current that Mr. Jones and his fellow travelers may be powerless to stop.
Source>http://www.washingtontimes.com/news/2016/may/18/monica-crowley-how-donald-trump-is-drawing-in-demo/?page=all#pagebreak

Posted by theodore miraldi at 7:46 AM