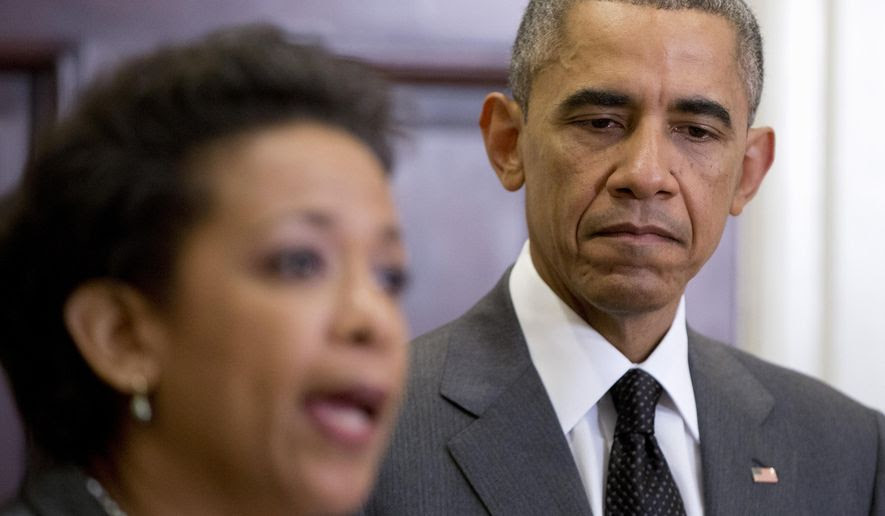 A federal judge ordered the Justice Department to send its lawyers back to remedial ethics classes Thursday after finding that the administration repeatedly misled the court in the high-profile challenge to President Obama’s deportation amnesty.
Judge Andrew S. Hanen said the lawyers knew the administration was approving amnesty applications but actively hid that information both from him and from the 26 states that had sued to stop the amnesty.
Worse yet, even after the court ordered a halt to the whole amnesty, the Department of Homeland Security approved several thousand more applications, in defiance of the court’s strict admonition, Judge Hanen said, counting at least four separate times the government’s attorneys misled him.
He even quoted from the scene in “Miracle on 34th Street” when the boy is called to testify to Santa’s existence and says everyone knows not to tell a lie to the court. Judge Hanen said theJustice Department lawyers have an even stricter duty: Tell the truth, don’t mislead the court and don’t allow it to be misled by others.
“The Government’s lawyers failed on all three fronts,” he wrote in a 28-page ruling. “The actions of the DHS should have been brought to the attention of the opposing counsel and the Court as early as December 19, 2014. The failure of counsel to do that constituted more than mere inadvertent omissions — it was intentionally deceptive.”
The spanking was the most serious rebuke — but by no means the only one — that Obama administration lawyers have faced at the hands of judges in recent months, and Judge Hanenquestioned what was going on at the Justice Department to have reached this point.
Justice officials were not amused.
“The department strongly disagrees with the order,” said spokesman Patrick Rodenbush.
It’s unclear how many of their lawyers would be forced to retake ethics classes under the scope of the judge’s ruling.
The case stems from Mr. Obama’s policy, announced in November 2014, to try to grant a proactive three-year stay of deportation, and legal work permits, to as many as 5 million illegal immigrants.
Texas led a large group of states in suing, arguing the proposal violated both federal law and overstepped the president’s constitutional powers.
Judge Hanen agreed, halting the amnesty just days before it was to begin accepting applications in February 2015.
But in the months between November and February, the Department of Homeland Security had already begun approving three-year amnesties for so-called Dreamers, or young illegal immigrants who’d already qualified for two-year amnesties under a previous 2012 Obama policy. All told, more than 100,000 Dreamers’ applications were approved during that time.
The government lawyers said they didn’t think the Dreamers’ applications were an important part of the court case, arguing those should have been treated as a change to the 2012 policy, not part of the new 2014 policy.
They undercut their credibility, however, when several thousand more applications were approved in the weeks after Judge Hanen issued his February order halting the amnesty — something the government didn’t admit to until early March.
“The decision of the lawyers who apparently determined that these three-year renewals under the 2014 DHS Directive were not covered by the Plaintiff States’ pleadings was clearly unreasonable. The conduct of the lawyers who then covered up this decision was even worse,” Judge Hanenwrote.
In court, the government lawyers had admitted they’d left the judge with the wrong impression and expressed regret and sorrow. But the government said it wasn’t intentional, and said it had taken steps to try to correct the problems — including going back and recapturing almost all of the amnesties approved or sent out after Judge Hanen’s February order officially halting the program.
They did not, however, cancel the 100,000 three-year amnesties approved between November and February.
Judge Hanen ordered the government to turn over a list of those names to the court, and said the 26 states that sued can move to get a look at the lists if they can prove damages stemming from any of those applications.
Judge Hanen thought about tossing all of the government’s arguments out, but said since the merits of the case are now pending before the Supreme Court, he couldn’t do that. He also thought about imposing a financial penalty on the government, but said since taxpayers would end up footing that bill, it seemed pointless.
Instead, he said the best he could do was order the remedial ethics classes. His order applies to department lawyers at headquarters in Washington who practice in any of the 26 states that sued over the amnesty.
He ordered at least three hours of ethics training a year, and said it must be “taught by at least one recognized ethics expert who is unaffiliated with the Justice Department.”
Source>http://www.washingtontimes.com/news/2016/may/19/judge-orders-doj-lawyers-remedial-ethics-classes/?page=all#pagebreak
Posted by theodore miraldi at 7:29 AM