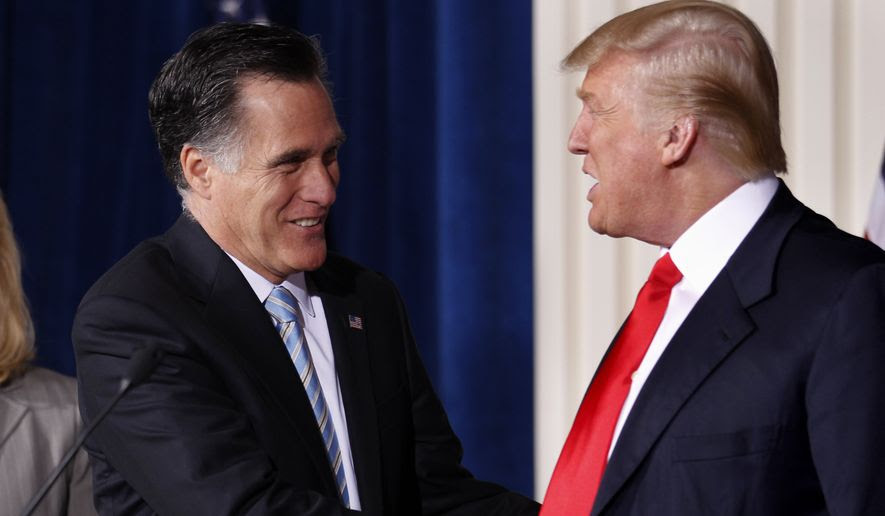 Mitt Romney in 2012 called the endorsement of Donald Trump a “delight” and an “honor” and praised the businessman’s job creation record and overall economic wisdom. (Associated Press)

Mitt Romney is doing his darnedest to sink presumptive GOP presidential nominee Donald Trump’s chances of winning the White House in November, in what has turned into an untoward clash of really rich Republicans.
The 2012 Republican presidential nominee, no stranger to flip-flops and questions over his complex wealth, has turned those same attacks against Mr. Trump. He even has said the billionaire businessman can’t be elected unless he releases his tax returns.
Mr. Romney’s former top campaign aides wave aside questions about his vehement denunciations, which have left the former Massachusetts governor increasingly in the minority as the rest of his party rallies around Mr. Trump.
“Romney has been clear what he thinks of Trump. Nothing has changed. When he feels the need to speak out, like on an issue of the tax returns, he will,” said Stuart Stevens, a senior adviser toMr. Romney’s 2012 campaign. “If you read Romney’s speech, it is clear as can be.”
A spokesman for Mr. Romney didn’t return an email message, and other former aides refused to answer questions about what is driving Mr. Romney’s anti-Trump agenda.
But the biting accusations — that Mr. Trump would steer the nation into a prolonged recession, lacks the temperament to be president and is hiding a bombshell in his tax records — contrast sharply with his rhetoric four years ago, when Mr. Romney traveled to the Trump International Hotel and Tower in Las Vegas to publicly accept the endorsement of Mr. Trump.
Mr. Romney called the Trump endorsement a “delight” and an “honor” and praised the businessman’s job creation record and overall economic wisdom.
John Feehery, a Republican Party strategist, said Mr. Romney’s recent behavior is a mystery.
“I think that Romney wants to run himself as a third party,” Mr. Feehery said. “It is a little bit weird because Trump endorsed Romney and Romney made that a big deal. It seems very ungrateful.”
What is clear, Mr. Feehery said, is that Mr. Trump, the billionaire with his name tagged on skyscrapers, has done a better job of connecting with ordinary Americans than Mr. Romney. He said the multimillionaire, with a car elevator in one of his homes, came off as “out of touch” in 2012.
“I don’t think it necessarily hurts Trump because Romney is a thing of the past,” Mr. Feehery said of the 2012 candidate’s attacks. “He lost to Obama. He is a loser. But I find it frustrating because we have to move on and beat Hillary.”
Mr. Romney flirted this year with making a third bid for the White House but backed off after seeing signs that Republican voters have little appetite for a do-over candidate.
Instead of offering himself, Mr. Romney has tried to tell Republicans who they shouldn’t pick. He scheduled a major speech in Utah in March specifically to denounce Mr. Trump and his supporters.
Mr. Romney called Mr. Trump a “phony” and a “fraud,” similar to charges that haunted Mr. Romney during his 2008 and 2012 campaigns.
Even as many Republicans were moving last week to embrace Mr. Trump, with varying degrees of enthusiasm, Mr. Romney remained on the attack.
He said Mr. Trump’s refusal to release his tax returns means there is “good reason to believe there is a bombshell” lurking in them. Senate Democratic leader Harry Reid of Nevada levied the same attack on Mr. Romney in 2012.
Republican National Committee Chairman Reince Priebus said this weekend that he “wouldn’t be surprised if people don’t care” about Mr. Trump’s tax returns.
Ron Kaufman, a Republican National Committee member from Massachusetts who served as a senior adviser to Mr. Romney’s presidential campaign and is now backing Mr. Trump, took a pass on Mr. Romney’s motivations. “Ask him,” he said, though he did suggest that holding out hope for another alternative to Mr. Trump is a bad idea.
“You have two options,” Mr. Kaufman said. “You can be on board and vote for Donald Trump and you can vote for Hillary Clinton, and there is no third option, and not voting means you are voting for Hillary.
“There are three things that matter in the end: Hillary Clinton, the Supreme Court and holding the Senate,” he said. “They all matter. If you believe those three things are important, then you really don’t have any other option. Everything else is make-believe.”
Whether or not Mr. Romney is motivated by billionaire envy, polls suggest that Mr. Trump is doing as well, or even better, than Mr. Romney was in key swing states at this point in 2012.
Mr. Trump is running neck and neck with Mrs. Clinton, the likely Democratic nominee, in Florida and Pennsylvania and is leading by 4 percentage points in Ohio.
Source>http://www.washingtontimes.com/news/2016/may/17/mitt-romney-blasts-fraud-donald-trump-4-years-afte/?page=all#pagebreak
Posted by theodore miraldi at 7:13 AM