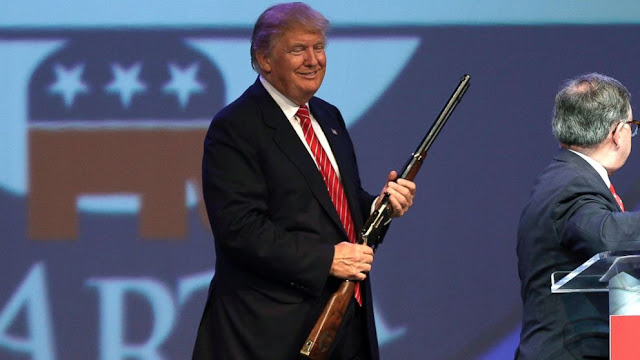 The National Rifle Association endorsed Donald Trump Friday, ahead of the presumptive Republican presidential nominee’s address to the group.
Executive Director Chris Cox announced the endorsement as he introduced the billionaire businessman, who was set to speak at the NRA-ILA (Institute for Legislative Action) leadership forum in Louisville, Ky.
“I’m officially announcing the NRA’s endorsement of Donald Trump for president,” Cox said.
The NRA's endorsement comes significantly earlier in the election cycle than previous endorsements by the group. The group did not endorse 2012 GOP nominee Mitt Romney until October 2012.
However, officials told Fox News ahead of the announcement there is an excitement for Trump among their members that they did not see for Romney or 2008 nominee Sen. John McCain, R-Ariz.
Fox News’ John Roberts contributed to this report.
Source>http://www.foxnews.com/politics/2016/05/20/nra-endorses-trump.html
Posted by theodore miraldi at 3:16 PM