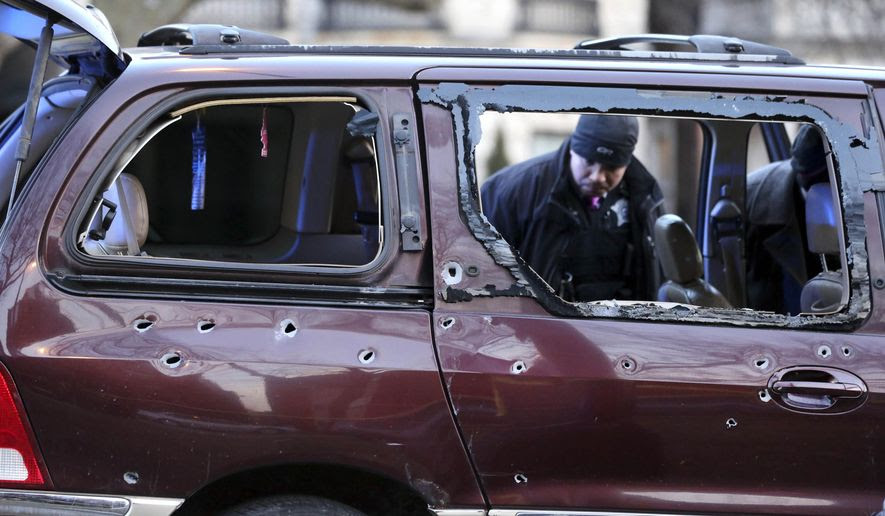 In this Jan. 19, 2016 photo, Chicago police investigate the scene where multiple people were shot on the city’s South Side. Chicago police said Monday, Feb. 1, 2016, the number of homicides in the city climbed dramatically in January to 51, in the bloodiest start to a year in at least 16 years. They said there were 22 more homicides this January than in January 2015 and that the number of shooting incidents during the same period more than doubled to 242. (Chris Sweda/Chicago Tribune via AP)


A rise in homicides and other violent crimes in major cities across the U.S. in the first months of 2016 is reigniting a debate over whether law enforcement may have slacked off or become less aggressive.
Chicago, Los Angeles, Memphis and Las Vegas are among major cities reporting a notable uptick in homicides — but more than half of the police departments that reported first-quarter crime statistics also experienced increases in rapes, robberies, aggravated assaults and nonfatal shootings.
Not all cities saw increases in crime, but new data provided from the Major Cities Chiefs Association found those that did saw upticks so pronounced that they account for 114 more murders, 260 more rapes, 837 more robberies, 3,132 more violent assaults and 818 more nonfatal shootings recorded by the 63 police departments that compared statistics from the first three months of 2016 and 2015.
After more than a decade of downward-trending crime rates across the country, the fact that homicides have begun to increase in some cities but not others is worrisome to law enforcement who are struggling to explain why, said Chuck Wexler, director of the Police Executive Research Forum.
“It’s almost like an early warning system,” Mr. Wexler said. “And you have a number of cities who are asking the same question: What is the common denominator?”
FBI Director James B. Comey, after being briefed on the crime statistics last week, revived a controversial assessment that the crime uptick might be due to police becoming less aggressive in their duties as officers fear they may become the subject of the next “viral video.”
Clashes between police and protesters in Ferguson, Missouri, in 2014 following the fatal shooting of a black teenager by a white police officer brought modern-day police practices under the microscope, with videos emerging since then that captured deadly encounters coming under intense public scrutiny.
“The numbers are not only going up, they are continuing to go up in many of those cities faster than they were going up last year,” Mr. Comey told reporters during a roundtable discussion at FBI headquarters last week. “I don’t know what the answer is, but holy cow, do we have a problem.”
The data released Friday show mixed results across the country.
Thirty of the 63 reporting police departments saw increases in homicides, pushing the number of killings reported in those cities up 8 percent over the same period in 2015 — for a total of 1,365 murders.
The Chicago Police Department reported the most murders of any of the 63 departments, with 141 homicides compared to 83 at the same time last year. Rapes were down by 6 percent, but robberies and aggravated assaults were up by approximately 25 percent, and nonfatal shootings were up by almost half. Homicides were up by 25 percent in Los Angeles, 35 percent in Memphis, 42 percent in Dallas and had nearly doubled in Las Vegas.
But killings declined in New York City, Houston and Miami — though the increases and decreases that departments reported in homicides did not always correlate to similar changes in other violent crime. For example, while Houston’s 61 homicides was a 14 percent drop from last year, crime was up in each of the other four categories reported.
The NYPD reported a decrease in robberies but saw upticks in rapes and aggravated assaults, and remained near even on nonfatal shootings.
Las Vegas, Minneapolis and Nashville are the only police departments to report increases in all five categories, though several other departments that did not report data for nonfatal shootings saw increases in the other four categories.
The White House and some criminologists have disputed Mr. Comey’s assertion that less aggressive policing may be to blame for the increases, noting that there is no evidence to support the theory.
James Alan Fox, a criminologist at Northeastern University, told The New York Times that Mr. Comey’s idea of a “viral video effect” was undercut by the decrease in homicides that many cities reported, even as videos of police interacting with the public continued to emerge.
He also cautioned that the fluctuations reported were only over a small period of time, noting the larger historic downward trends.
“What’s basically happening is these cities are becoming victims of their own success,” Mr. Fox said. The crime rate “can’t go to zero, and when you hit really low numbers, it can only go up.”
While violent crime rates have been on a downward decline over the last several decades, FBI data shows violent crime rose across the country in the first six months of 2015. In particular, murders were up by 6.2 percent during the first half of 2015 compared to the first six months of 2014 — marking the first uptick in that category in four years.
“We do know that in cities that have experienced trauma, like Baltimore and Chicago, it is unmistakable that it has an impact on crime,” Mr. Wexler said. “How that impact happens and what it means, that is what we have to figure out.”
Mr. Wexler agrees law enforcement leaders have become concerned that viral videos are making police less proactive, though he said there isn’t data yet to prove or disprove the theory.
Instead, he offered alternative theories he’s also heard from law enforcement, including a quicker escalation of violent gang beefs as a result of social media.
Insults can be flung between gang members around the clock online, creating an “accelerant” that triggers retaliatory violence more often than face-to-face encounters, Mr. Wexler said.
He also points to one of the driving factors of the crime increase in the 1990s, drugs, as a potential cause. While crime in the 1990s was fueled by crack cocaine wars, Mr. Wexler notes the heroin and opioid epidemic that’s more recently taken root in communities across the country.
“Are we seeing drugs, specifically heroin — cheap heroin that has a purity of 90 percent — fueling some of the violence we are seeing in some cities?” he said. “It’s an area that is worth examining.”
Source>http://www.washingtontimes.com/news/2016/may/15/homicides-violent-crimes-spike-in-us-cities-as-pol/?page=all#pagebreak
Posted by theodore miraldi at 10:17 AM