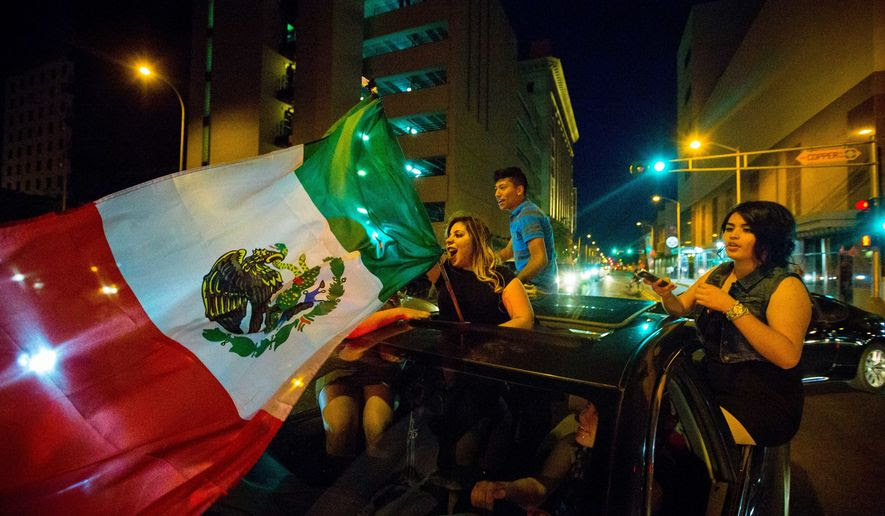 Photo by: Jett LoeA woman waves the Mexican flag at the Albuquerque Convention Center after a rally by Republican presidential candidate Donald Trump in New Mexico.
Analysts say anti-American sentiments and violence from protesters are chasing undecided voters toward the very man they are protesting. (Las Cruces Sun-News via Associated Press)

The ugly protest scenes outside Donald Trump’s rallies are doing more damage to the protesters than to Mr. Trump’s political chances, according to analysts who say the violence and anti-American sentiments are backfiring.
Protesters in Albuquerque, New Mexico, last week toted Mexican flags, burned American flags and clashed with police, racking up $50,000 in damage to the neighborhood.
Perhaps even worse for the rioters, they are likely chasing undecided voters toward the side of the man they are protesting.
“When people show up throwing bottles and waving the Mexican flag, you have had a lot of people who may have not been willing to support Trump who see this and say the enemy of my enemy is my friend,” said former Rep. Tom Davis, who ran House Republicans’ campaign committee for two cycles a decade ago. “There is no question these are helping Trump, and Democrats know that.”
The billionaire businessman’s stern calls to tighten border controls, his vow to build a wall between the U.S. and Mexico and his declaration that Mexican society is sending “rapists” and other bad elements to the U.S. have angered Hispanic activists, who view Mr. Trump’s campaign as a tipping point in politics.
Likewise, his call for a ban on Muslim visitors and some of his comments about women leave many voters wary and some of them angry enough to take action beyond the ballot box.
Attempts to disrupt his rallies from the inside have drawn stiff rebukes from the 69-year-old candidate, who has talked about punching protesters and described others as undatable goobers, diaper-wearing morons and fat blowhards.
“Go home to mommy,” he told a protester at rally last week in Albuquerque.
Outside of the Albuquerque rally, things were even worse.
Six city police officers sustained “significant injuries” and another was treated for smoke inhalation from fires that protesters set. Every officer who responded was pelted with rocks and other debris by the anti-Trump swarm, the department said.
Two juveniles were arrested and released to their parents, and a 30-year-old woman and a 19-year-old man were arrested and charged with disorderly conduct.
The department signaled that more arrests are likely but could not confirm reports that Mexican gangs were involved in stirring up the fracas.
Television news, already eager to cover Mr. Trump, has been filled with images of lines of officers preparing for violence and reporters documenting every rock-throwing incident.
Patrick Buchanan, a two-time presidential candidate, said the scenes could alarm moderate Republicans already wary of Mr. Trump, and there is a danger the protests could feed into a media narrative that he is inciting the violence.
For now, though, Mr. Buchanan said “on balance Mr. Trump wins” because the protesters appear to be backing up the candidate’s claims.
“Cop-battlers and rock-throwers desecrating American flags and waving Mexican flags are a perfect foil for Trump,” he said. “They solidify and harden his base and reinforce his case against the illegals from across the border.”
Hillary Clinton, the likely Democratic presidential nominee, and her allies have indeed accused Mr. Trump of stoking the violence with his policy proposals and behavior on the stump.
“When you divide people against one another, you don’t know what is going to happen,” Mrs. Clinton said at a rally this year. “We are seeing violence at political rallies in our country. That is the kind of thing you see on TV, you assume is far away, don’t you? Well, this, this hateful talk about immigrants, about Muslims, about women, I mean, enough, enough. It is not who we are.”
Corey Lewandowski, a senior adviser to the Trump campaign, said the press is overplaying the protest story.
“Mr. Trump and the campaign do not condone violence,” Mr. Lewandowski said. “The campaign rallies are attended by tens of thousands of people, and it’s no surprise the dishonest media is intent on focusing on a few professional agitators.”
David Yepsen, director of the Paul Simon Public Policy Institute at Southern Illinois University, saidMr. Trump’s rallies are “pretty unprecedented” and that the closest historical equivalent he could think of was George Wallace’s 1968 campaign and the way in which “he’d bait the media.”
“In a conventional campaign, such rallies and optics would hurt,” Mr. Yepsen said. “Just look at what the Chicago 1968 convention did to Democrats — made them look unfit to govern. ButTrump’s is an unconventional campaign.
“It’s a little early to see whether it works with general election audiences, such as independents in tossup states,” he said. “It fires up some voters and scares others. Trump doesn’t seem likely to tone it down. He’s going with what worked, and he seems to be his own best consultant.”
Polling from earlier this year, after the first round of violent protests, suggests voters do blameMr. Trump but blame the protesters even more.
Jeff Crouere, a Trump delegate from Louisiana who hosts a conservative radio talk show, said the protests have been net positives for the presumptive Republican nominee.
“Every time you see one of these protesters burn an American flag or attack a police officer or hurl a profanity-laced tirade against a Trump supporter, I think that reaffirms to all Americans thatDonald Trump is standing up for our country,” Mr. Crouere said. “I think the average American sees these people committing violence and burning the flag and says we affiliate more with the person who is waving the American flag, not the guy who is burning the American flag.”
Source>http://www.washingtontimes.com/news/2016/may/30/donald-trump-rally-protests-backfire-as-anti-ameri/?page=all#pagebreak
Posted by theodore miraldi at 9:08 AM