RISE OF THE RIGHT IN AUSTRIA 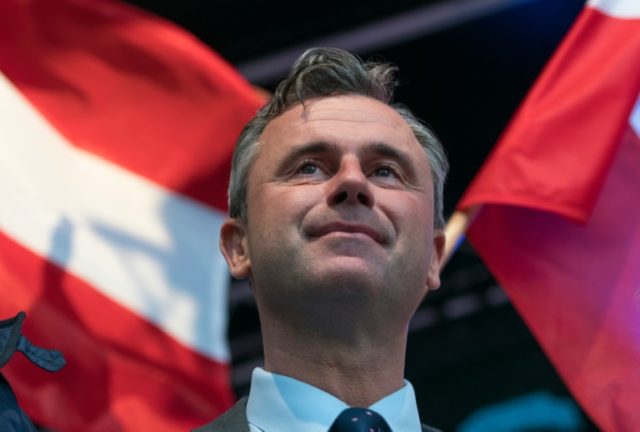 Vienna (AFP) - Austrians voted Sunday in a presidential runoff which could usher in the European Union's first far-right leader, fueled by anti-immigrant anger over Europe's worst post-war refugee crisis.
A huge influx of asylum-seekers, growing unemployment and frozen reforms have left Austria deeply polarised and driven angry voters away from the centrist ruling coalition toward fringe groups.
But Norbert Hofer of the anti-immigration Freedom Party (FPOe) denied that he posed a risk as president.
- 'Not a dangerous person' -
"I am not a dangerous person," the FPOe star told reporters as he voted in his home town of Pinkafeld, in the eastern Burgenland state.
For the first time since 1945, the president will not come from one of two main parties, prompting national media to warn of a political "tsunami".
Instead, the showdown pits 45-year-old Hofer against the Green-backed economics professor Alexander van der Bellen, 72.
Polling stations opened at 0500 GMT and first exit polls are expected at 1500 GMT. Final results will be announced on Monday after postal votes have been counted.
They could prove a tie-breaker in the race, with close to 900,000 people -- or a record 14 percent of Austria's 6.4 million eligible voters -- casting their ballot by mail this year.
Last month, Hofer -- a gun enthusiast left partially disabled after a paragliding accident -- comfortably beat his rival by 35 percent to 21 percent.
Described as the FPOe's "friendly face", the far-right contender has pushed populist themes with a winning smile, steering clear of the inflammatory rhetoric used by party leader Heinz-Christian Strache.
The more moderate tone paid off, earning the FPOe its best result at federal level and knocking candidates by the Social Democrats (SPOe) and the centre-right People's Party (OeVP) out of the race.
But observers have warned that beneath Hofer's smooth image lurks a "wolf in sheep's clothing", who has already threatened to seize upon never-before-used presidential powers and fire the government if it fails to get tougher on migrants or boost the faltering economy.
European leaders including European Commission chief Jean-Claude Juncker have also voiced concern at the turn of events in Austria.
- 'Pest and cholera' -
The two candidates cast their vote on Sunday morning: van der Bellen in Vienna, and Hofer in Pinkafeld, flanked by his wife and young daughter.
Hofer said he hoped to get 52 percent of the vote, but added "it could be tight".
On Friday, the far-right hopeful had shown himself confident of victory in his final public address.
"I will be your new president," he told a jubilant crowd at the Viktor-Adler square in Vienna's Favoriten district, an FPOe stronghold.
Van der Bellen, meanwhile, said on Sunday he was "cautiously optimistic" after casting his vote.
The former Green leader previously warned that Austria was facing a "pathbreaking decision between a cooperative and an authoritative style".
"I've experienced how Austria rose from the ruins of World War II, caused by the madness of nationalism," he said recently.
Although he enjoys backing from many public figures including new Chancellor Christian Kern, van der Bellen has proven a divisive figure, with conservative Austrians accusing him of pandering to the left.
"It's a choice between pest and cholera. Whoever wins, I will wake up on Monday to somebody whom I don't want to represent Austria," said a mother-of-two in her thirties, refusing to give her name, after casting her ballot in Vienna.
"I've chosen the lesser evil, but it's a frustrating election," another voter, Astrid Meister, told AFP.
- Lacklustre protests -
Hofer's win would also pave the way for the FPOe to head the next government after parliamentary elections, scheduled for 2018.
The party has tapped into public anger about growing inequality and the migrant crisis, which saw around 90,000 asylum-seekers arrive last year -- the second-highest number in the EU on a per-capita basis.
Back in 2000, more than 150,000 people marched in the Austrian capital against the FPOe -- then led by the late, SS-admiring Joerg Haider -- after it entered a much-maligned coalition with the OeVP.
The far-right power grab also prompted international sanctions and turned Austria into an EU pariah.
But times have changed, with support for populist parties surging across the continent and anti-Hofer rallies only drawing small crowds.
Source>https://www.yahoo.com/news/polls-open-key-austrian-presidential-runoff-055930890.html?ref=gs
Posted by theodore miraldi at 10:17 AM