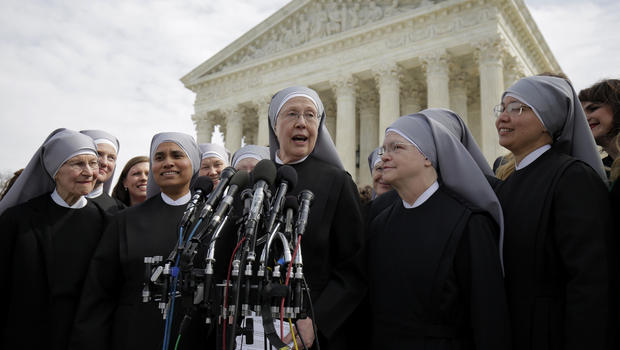 The Supreme Court punted Monday on a challenge by religious-affiliated employers to ObamaCare’s contraception mandate, sending the election-year dispute back to the lower courts.
The justices had been considering whether religious-affiliated institutions like the Little Sisters of the Poor, a Catholic charity of nuns, can be exempt from having to pay for -- or indirectly allow -- birth control and other reproductive coverage in their health plans.
But the court did not rule on the merits. Instead, the justices sent the cases back to the appeals courts to make new decisions based on recent statements.
“The Court expresses no view on the merits of the cases,” the court said in an unsigned, unanimous opinion. “In particular, the Court does not decide whether petitioners' religious exercise has been substantially burdened, whether the Government has a compelling interest, or whether the current regulations are the least restrictive means of serving that interest.”
The decision ducks, for now, a high-profile dispute before the Supreme Court at the height of an election year -- at a time when the court is dealing with a vacancy following the death of Justice Antonin Scalia.
The matter almost certainly would not return to the Supreme Court until after the 2016 presidential election.
The outcome suggests the court lacked a majority for a significant ruling and is perhaps another example of how the justices have been affected by the death of Scalia.
In the short term, the government can take steps to make sure that women covered by the groups' health plans have access to cost-free contraceptives. At the same time, the groups will not face fines for refusing to comply with administration rules for objecting to paying for birth control.
The Little Sisters of the Poor's legal team nevertheless declared victory Monday.
"We are very encouraged by the Court's decision, which is an important win for the Little Sisters. The Court has recognized that the government changed its position," Mark Rienzi, senior counsel at the Becket Fund for Religious Liberty, said in a statement. "It is crucial that the Justices unanimously ordered the government not to impose these fines and indicated that the government doesn't need any notice to figure out what should now be obvious -- the Little Sisters respectfully object. There is still work to be done, but today's decision indicates that we will ultimately prevail in court."
White House Press Secretary Josh Earnest, though, said the administration was “gratified” by the decision, arguing that it ensures millions of woman will have access to health care.
The high court two years ago said the Little Sisters and its third-party insurance administrator could remain temporarily exempt from the mandates, while lower courts continued to wrangle with the merits of the primary challenge to the federal health law provisions on contraception.
After ObamaCare was passed in 2010, the White House negotiated what it called a compromise aimed at allowing the medical coverage but also providing an administrative workaround for those opposing it. The central dispute revolves around a requirement these groups self-certify -- and sign a form authorizing an outside administrator to provide contraceptives without the employers' direct involvement.
The rules were designed by the administration to give women employed at nonprofit, religious-based organizations the ability to receive contraception through separate health policies with no co-pay.
Lawyers for the nuns and related plaintiffs told the court during arguments in March that their clients faced a "moral dilemma" -- refuse to comply and face millions in crippling fines, or violate what all sides agree are the nuns' "sincerely held" religious beliefs.
Fox News' Bill Mears and The Associated Press contributed to this report.
Source>http://www.foxnews.com/politics/2016/05/16/supreme-court-sends-obamacare-contraception-mandate-case-back-to-lower-courts.html?intcmp=hplnws
Posted by theodore miraldi at 2:06 PM