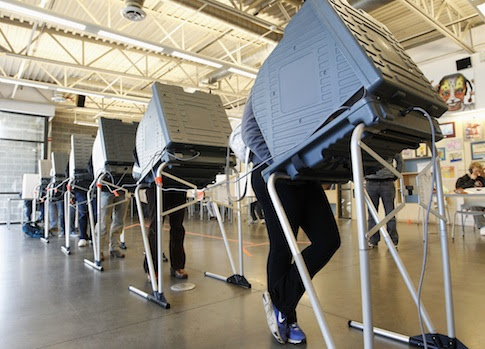 
Hillary Clinton’s top campaign lawyer lost a challenge against Virginia’s voter identification laws that was fueled by money from liberal billionaire George Soros.
The lawsuit, filed early last year on behalf of the Democratic Party of Virginia, sought to end Virginia’s voter identification law, known as SB 1256. The lawsuit was dismissed by a federal court Thursday after a lengthy trial that saw numerous witnesses testify, dealing a blow to an organized effort by the left to take on voter ID laws in numerous states leading up to the 2016 election.
The plaintiffs challenged the constitutionality of the law throughout the case by alleging it violates Section 2 of the Voting Rights Act and said that it has an adverse impact on minority groups.
They also argued that the law violates the First Amendment and the Equal Protection Clause of the Fourteenth Amendment by putting an undue burden on the right to vote of minorities and disfavored the groups because of their political views. The plaintiffs contended that the law was specifically put into place to suppress the votes of African-Americans, Latinos, and young people.
The federal court dismissed the lawsuit on all counts.
J. Christian Adams, president of the election integrity group the Public Interest Legal Foundation, filed a motion to assist the state against the suit.
“We’re happy that the court dismissed this attack on Virginia’s common sense Voter ID law,” said Adams. “It’s a shame civil rights groups are wasting so much donor money in failed efforts to block a law most people like and that stops nobody from voting.”
The Virginia voter ID challenge was part of a larger effort to attack voter identification laws across multiple states bankrolled by millions from George Soros.
Soros got wind of the potential challenges and became involved in January 2014, vowing to put at least $5 million in funding the effort.
“We hope to see these unfair laws, which often disproportionately affect the most vulnerable in our society, repealed,” said Soros.
The Virginia voter ID campaign was led by Marc Elias, a partner at the D.C.-based law firm Perkins Coie. Elias is the top lawyer for Hillary Clinton’s campaign but is acting independently and in his capacity as an attorney at Perkins Coie on the challenges.
Elias filed similar lawsuits in Ohio and Wisconsin last year.
He brought the Ohio lawsuit forward on behalf of the Ohio Organizing Collaborative, who later found themselves under investigation by state authorities for fraudulent voter registrations. After this development, the Ohio Democratic Party and other local party organizations replaced the group on the lawsuit, and a source close to Elias contended he was no longer involved with the group.
A federal judge dismissed a portion of the Wisconsin lawsuit challenging the state’s voter identification requirements in December 2015.
Elias did not return a request for comment on the Virginia dismissal by press time.
Source>http://freebeacon.com/issues/soros-top-clinton-lawyer-lose-lawsuit-virginias-voter-id-law/
Posted by theodore miraldi at 6:57 PM