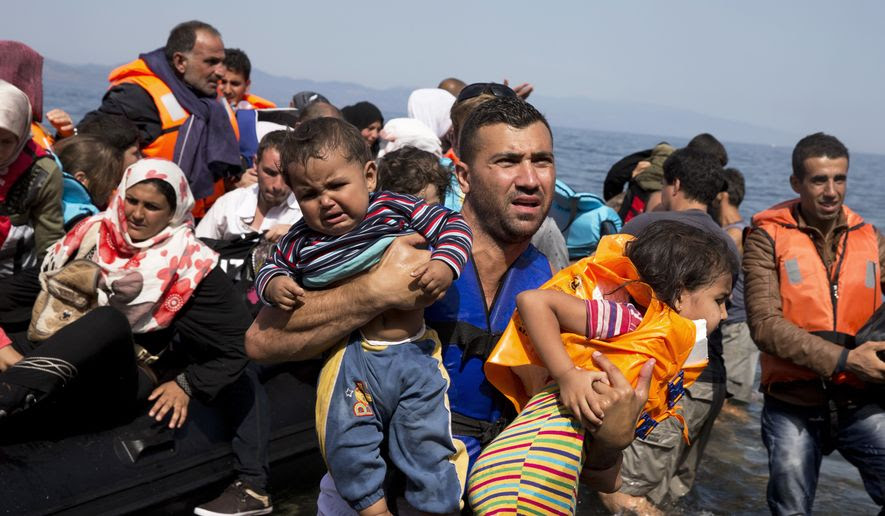 The State Department admitted 80 Syrian refugees on Tuesday and 225 on Monday, setting a new single-day record as President Obama surges to try to meet his target of 10,000 approvals this year — sparking renewed fears among security experts who say corners are being cut to meet a political goal.

Officials insisted they’re moving faster because they’re getting better at screening, and say they’re still running all the traps on applicants.
But the new spike in numbers is stunning, with more people accepted on Monday alone than were approved in the entire months of January or February.
“The Obama administration is on full throttle to admit as many people as possible before the time clock runs out on them,” said Jessica Vaughan, policy studies director at the Center for Immigration Studies. “This is the classic scenario when political expediency trumps prudence, and someone slips through who shouldn’t have, and tragedy ensues.”
Powerless to stop the civil war in Syria, Mr. Obama has instead offered the U.S. as a safe haven for those fleeing the conflict, promising to accept 10,000 refugees between Oct. 1 and Sept. 30. As of Tuesday evening, he’d approved 2,540 — an average of about 10 applications a day.
To meet the 10,000 goal, that pace will have to spike to nearly 60 approvals a day.
Officials at U.S. Citizenship and Immigration Services, the agency charged with vetting the applications, and at the State Department, which gives final approval, insisted they can meet Mr. Obama’s goal without sacrificing security.
From February to April, the administration deployed extra staff to Jordan, where some 12,000 applicants referred by the U.N. were interviewed. Interviews of Syrians were also being held in Lebanon and Iraq, and both USCIS and the State Department said everything is going according to plan, with enough interviews completed that they can bring in 7,000 more refugees by the end of September.
“Increases in processing capacity have improved our capacity to meet the 10,000 target for Syrian refugee admissions for this fiscal year. As such, we expect Syrian refugee arrivals to the U.S. to increase steadily throughout the fiscal year,” a State Department officialsaid.
The department says refugees undergo the most checks of anyone applying to enter the U.S., and Syrians are getting as much scrutiny as possible.
But pressure to speed up the process is growing. Last week Senate Democrats, led by Sen. Richard J. Durbin of Illinois, fired off a letter saying other countries are approving refugees at a quicker pace, and demanding the administration catch up.
“Refugees are victims, not perpetrators, of terrorism,” the Democrats wrote in their letter.
That’s not always the case, however, as two men who arrived as part of the refugee program were charged with terrorism-related offenses in January.
One of those, Aws Mohammed Younis Al-Jayab, an Iraqi-born man, was living in Syria when he was admitted as a refugee in 2012. The State Department counts him against its Iraqi refugee program, not against the Syrian refugee program.
The Obama administration has repeatedly cited the Iraqi program as evidence that it can safely admit refugees from Syria. But security experts say the U.S., by dint of the long war in Iraq, has access to government databases, and a presence on the ground, to assist in checking out would-be refugees’ stories.
No such access exists in Syria, where the U.S. considers the current regime an enemy and much of the country is occupied by the very terrorist forces from Islamic State that the U.S. is fighting.
Critics say the Obama administration has been too heavily focused on Muslim refugees, while hundreds of thousands of Christians are left behind. The latest statistics show only a dozen Christian refugees from Syria have been accepted so far — a rate of less than half of one percent.
The overwhelming majority — more than 97 percent — are Suni Muslims.
Congressional Republicans have called for a slower approach to admitting refugees, but have been powerless to stop Mr. Obama. Democrats filibustered a proposal to require the chiefs of Homeland Security, intelligence and the FBI to sign off on every refugee’s application.
The House will take another step Wednesday, as the Judiciary Committee votes on legislation requiring USCIS to check the social media profiles of all applicants seeking visas from suspect countries.
States have also tried to block Mr. Obama, renouncing agreements to work with the administration to resettle refugees within their borders. Texas even sued to try to bar resettlement, but a federal court rejected the lawsuit, saying the state didn’t have standing.
Source>http://www.washingtontimes.com/news/2016/may/24/state-department-sets-single-day-record-for-syrian/?page=all#pagebreak
Posted by theodore miraldi at 8:53 AM